How the System Gets Systemic and Other Tales


by Eve Fisher
I see the grand opening of America is going well. Especially in Florida and Texas. But more on that later. Or maybe not. It's too easy a shot.


What struck me about the Tulsa Rally, the Arizona "Students for Trump" Rally, and (I'm sure) tomorrow's 3rd of July Fireworks at Mount Rushmore, South Dakota* were the "Front Row Joes". The ones who show up early, camp out, bring the kids and grandkids, travel from rally to rally, wear special outfits, have slogans, legends, beliefs, and a whole culture that goes with following the object of desire from one venue to another. You know: the conservative version of Deadheads.

God bless them all, and may they not get the virus. BTW, I can't help but wonder how many of the older crowd were Jerry Garcia fans back in the day. I'll bet if someone started humming "Friend of the Devil" a lot of people would take up the song...


BUT BACK TO THE MAIN THEME


Meanwhile, though, I've been thinking about systemic racism. Now I have not experienced this as such - all of the people who have ever harrassed me about my ethnicity have so far gotten it wrong: I am neither Jewish, Native American, Italian, or mixed-race, although I would not mind in the slightest if I were. What this dark-haired, dark-eyed, large-nosed cantankerous crone is, is Greek, and my Ancestry gene test proves it. (God, I wish racists would bother to do a little research and get their hateful ethnic stereotypes correct.)


But I certainly have experienced systemic sexism. As has every woman I know. So, let's go over some of the issues.


Dress Codes - "Show us your legs, ladies, and don't be shy about it!"


My first official job was in 1971 (I lied about my age, and other things), as a switchboard operator in Grand Rapids, Michigan. Grand Rapids gets cold and very snowy in winter, but we were required to wear dresses to work. And the manager could require us to wear dresses, even though no one in the public ever saw us. (Most of us wore pants on the way over and changed.) Women couldn't wear pants on the job anywhere at that time. It wasn't until the mid-70s that the pantsuit became popular and women could wear them at work.


But not everywhere: women weren't allowed to wear anything but skirts on the floor of the US Senate until 1993, when Senators Barbara Mikulski and Carol Moseley Braun wore pantsuits in defiance of the rules. That took a while, didn't it?


But sometimes it takes even longer: As late as 2019, a federal judge struck down a rule at a North Carolina charter school that prohibited girls at the school from wearing pants. It required them instead to wear skirts, skorts, or jumpers. The school had argued that the dress code promoted “traditional values.” (HERE)


And I note that the rule is still - on the Weather Channel and Fox News among other places - that female broadcasters wear (often sleeveless) dresses and spike heels all four seasons, while their male counterparts can actually cover their legs and arms with multiple layers. Still.

Jobs - It's hard to get one if you are barred from even applying.


But in 1973, in Pittsburgh Press Co. v Pittsburgh Commission on Human Relations, 413 U.S. 376 (1973), SCOTUS upheld an ordinance enacted in Pittsburgh that forbade sex-designated classified advertising for job opportunities, against a claim by the parent company of the Pittsburgh Press that the ordinance violated its First Amendment rights. (Wikipedia) And finally, the barriers broke down! 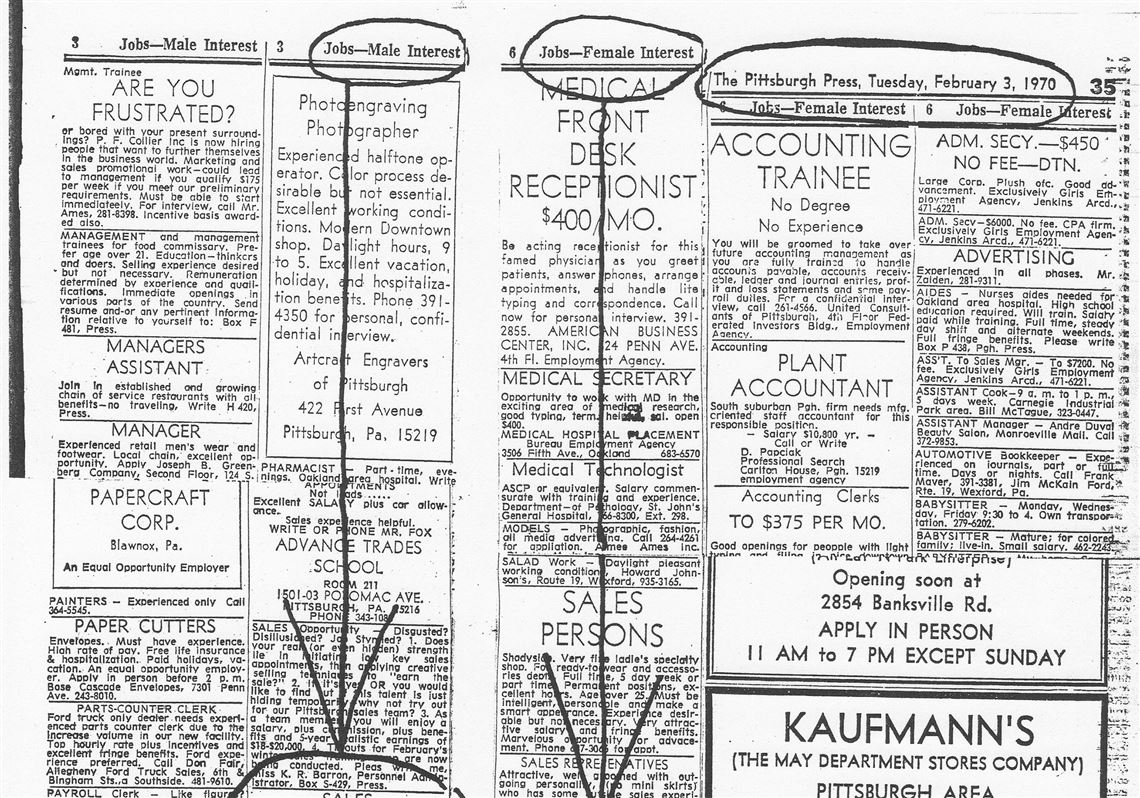 It still took a while for things to actually change throughout the land, and in many places, a token woman got hired, and that was enough, despite the fact that (ahem) women do make up 50% of the population. So far we're settling for 23% of Congress, and 5% of CEOs, and 0% Vice Presidents or Presidents. To quote the great RBG when asked "'When do you think it will it be enough? When will there be enough women on the court?' And my answer is when there are nine." (RBG)

While there's a long history of women's colleges in America, beginning in the 1800s with seminaries, almost all of them were aimed at teaching teachers. Full education and co-educational college education was a long hard slog. It wasn't until the 1950s that - again - SCOTUS weighed in with a number of decisions that said public single-sex universities violated the Equal Protection Clause of the US Constitution.

"The Ivy League schools held out the longest: Yale and Princeton didn’t accept female students until 1969. Harvard didn’t admit women until 1977 (when it merged with the all-female Radcliffe College). Brown (which merged with women’s college Pembroke), Dartmouth and Columbia did not offer admission to women until 1971, 1972 and 1981, respectively. Other case-specific instances allowed some women to take certain classes at Ivy League institutions (such as Barnard women taking classes at Columbia), but, by and large, women in the ’60s who harbored Ivy League dreams had to put them on hold." (Wikipedia)


Health - When you're not included because you're just an inferior man.


BTW, even today, most clinical trials for medicine and medical procedures are done exclusively on men. This is because - as we're always told - women have menstrual cycles that would screw up the research and men don't, and besides, "the average human is a '60 kilogram man'"**. One size fits all, right? Well, this has had some grimly hilarious results - did you know that the first major study ever done on breast cancer was done on men? True. But even today, studies on heart disease, lung cancer, Alzheimer's, and cholesterol are done primarily on men, and even when women are included in the studies, "they often fail to stratify data by sex or include information about hormone status or any other gender-specific factors." Which means we still don't know how well various drugs or treatments actually work for women. (HERE)


BTW - it's even worse for minorities. "Nearly 40 percent of Americans belong to a racial or ethnic minority, but the patients who participate in clinical trials for new drugs skew heavily white—in some cases, 80 to 90 percent. " (Scientific American)

In 1957, the FDA approved of the birth control pill but only for “severe menstrual distress.” In 1960, the pill was approved for use as a contraceptive. In both cases, it was only for married women. And even then it was only legal in some states. It wasn't until the late 60s through early 70s that it was made legal and available for both single and married women.


Credit - Or, how do you start a business without any money?


Until 1974, a woman was not able to apply for credit without her father's or husband's signature. If you were a single woman, you were SOL. The Equal Opportunity Credit Act changed that. BTW, it was Congresswoman Lindy Boggs who added the provision banning discrimination due to sex or marital status, because the committee hadn't put it in the original bill. She photocopied the new version of the bill and told the other committee members, "Knowing the members composing this committee as well as I do, I'm sure it was just an oversight that we didn't have 'sex' or 'marital status' included. I've taken care of that, and I trust it meets with the committee's approval." The committee unanimously approved the bill.


Took a long time to get. And I know a number of women who were rejected by a bank - because we generally don't have the assets of a man - and started their small businesses using credit cards. Lots of them.


More Problems with Being Female While Working - Pregnancy

Speaking of Pregnancy, how about the Age of Consent?


And how about consent, period?

Well, if you were married - you couldn't say no. Spousal rape wasn’t criminalized in all 50 states until 1993.


And, for most of us who have not been living under a rock, we all know that rape is damned hard to prove in the courts of public opinion, public gossip, and the law. Especially since as many as 200,000 rape kits are still sitting around police stations in the US that have never been and never will be tested. Kind of makes you feel like it just doesn't matter. But it does... (HERE)


And sexual harrassment at the workplace was not made illegal until 1986, when the Supreme Court ruled that sexual harassment can be sex discrimination prohibited by Title VII in the case of Meritor Savings Bank v. Vinson. However, as some of us know, it still continues...

(See a host of stories on that topic, including my own "Pentecost", in Me Too Short Stories: An Anthology, SleuthSayer Elizabeth Zelvin, editor.)

More Problems with Being Female While Working - Health Insurance


WOMEN COULD AND WERE CHARGED MORE THAN MEN FOR HEALTH INSURANCE UNTIL 2010's ACA!!!!


If the ACA is tossed out - as the current administration is trying to get SCOTUS to do - that will end and women can be charged more again. And undoubtedly will. (NPR)


Many states excluded women from jury duty until SCOTUS declared that to be illegal in Taylor v Louisiana in 1973. Gives a whole new insight into the all male juries of Twelve Angry Men, and Anatomy of a Murder, doesn't it?


BTW - Barring women from practicing law was only prohibited in the U.S. in 1971.

"I thought you were a man"


Previously shared in a comment on Melanie Campbell's blog (HERE):

Back in the late 70s, I made the finals for new play contest, and I went down for the public reading of all 5 finalists. Now, I'd submitted the play under the pen name M. V. Fisher. When I arrived, the person in charge looked at me, and said, "We thought you were a man." And sure enough, all the other finalists were men. I didn't win.

** For an absolute classic on how women have been measured by the male over the millenia, real Carol Tavris, The Mismeasure of Woman. https://www.amazon.com/Mismeasure-Woman-Carol-Tavris/dp/0671797492

A quick quote: On hysterectomy for a 'precancerous' diagnosis: "Although prostate cancer is far more common than uterine cancer, no one recommends preventative surgery on the prostate. The very idea would make most men premurderous."
Posted by Eve Fisher at 00:01 11 comments