Sartre, Camus, and Me


I am writing this on Tuesday, August 15. Normally I write well in advance but in response to the events of the last few days and Barb Goffman's column, I decided to write about existentialism.  Or my understanding of it, anyway.  Let's see if I can make that seem like it is reasonably connected.

This topic was on my mind because last week I had the privilege of hearing from some readers.  A book club had decided to examine my story "Street of the Dead House," and the organizer was kind enough to summarize the discussion for me.  Their reflections were full of insights, including things that had never occurred to me.  But I suggested that one element they missed, or at least did not mention, was the existentialist frame of the story.

The story is a retelling of  Edgar Allan Poe's "Murders on the Rue Morgue," from the viewpoint of the orang-outang.  In my version the ape has been experimented on by a mad scientist, giving him the power to think and, eventually to communicate via sign language.  The first sentence of the story is "What am I?"  and that is the question my character has to wrestle with.  He chooses to make the decision for himself. and carry it out through his own actions. More in line with Sartre and Camus than Dupin, I think.

So, here is my feeble understanding of existentialism, or the part that matters to me right now.  Consider this sentence.  I know you have heard similar ones:

I do bad things, but I am really a good person.

To which the existentialist says: no.  There isn't some hidden reserve, some secret part of you that is separate and unsullied by the things you do. You are what you choose to do.

Now move to a different sentence, one we have heard variations of in the last few days:

Yes, I went to protest the removal of a monument to the Confederacy, and I marched beside Nazis and Ku Klux Klanners, but that doesn't make me a racist.

And our existentialist might frown at labels like racist, but they would say, you showed your allegiance, you demonstrated which side you are on, and who you are comfortable with.  You can't claim that that isn't what you meant, because it is what you DID.

Anne Frank, of all people, put it this way: How wonderful it is that nobody need wait a single moment before starting to improve the world.

So that marcher who says he isn't what his actions say he is can start to improve the world this moment  by choosing different actions.  He can apologize, renounce old associations, and make up for past mistakes. But talk is not enough: people will continue to judge  him by his actions, especially if they contradict his words. 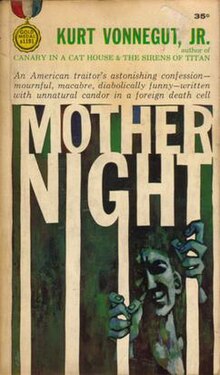 I thought about ending this with something Kurt Vonnegut said in one of my all-time favorite novels:

But the last few days have even made me rethink that.  It turns out that Vonnegut's thinking only works if you pretend convincingly.

For example, let's say you are a public figure, and in a moment of crisis when people are counting on you, you say something that was weak and offensive.  After heavy criticism you finally say something better, and that's a good thing.

But you have to say it like you mean it.  Ideally you should apologize for your first statement.  You should not immediately send out messages whining about how badly you have been treated, as if having your actions criticized was worse than people being killed or hospitalized.  You could even stop associating with people who advised you to say stupid things in the first place.

Because if it is obvious you are just pretending to be something, people are likely to realize what you really are.

For all the SleuthSayer readers out there: be a little extra kind to yourself this week.  You deserve it.