Ellery Queen and the Mystery of the Hidden Name


by Dale Andrews
by Dale C. Andrews (and Kurt Sercu) 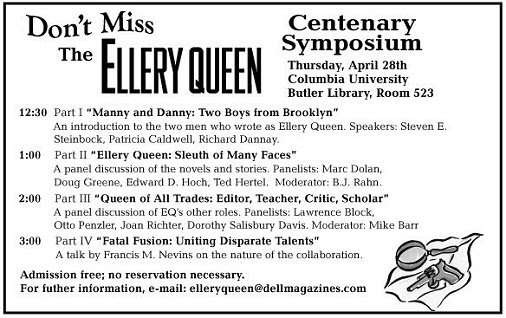 As I guess is evident, for most of my life I have been an Ellery Queen fan. I read Queen as a kid, and I trace my published mystery writing back to the Ellery Queen Centennial Symposium that EQMM hosted back in 2005. I attended that symposium in New York City, along with Kurt Sercu, the proprietor of the preeminent Ellery Queen website -- Ellery Queen: A Website on Deduction, and we both left the symposium with the inspiration that eventually led to our Ellery Queen pastiche The Book Case (EQMM, May 2007). While that weekend was the first time Kurt and I had met in person, we had already known each other for years on-line. 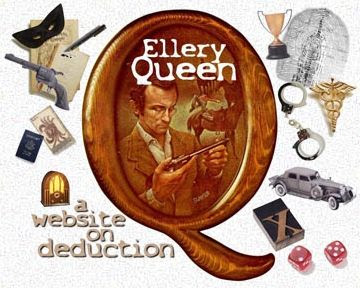 It was sometime around 2000 that I first stumbled onto Kurt’s internet homage to Queen, and while I became a regular visitor there our email friendship did not really blossom until two years later when, in a thread on the Ellery Queen sub-forum of the Golden Age Detectives website discussing Queen’s And on the Eighth Day, I posted a pastiche epilogue to the book, offering a “further explanation” to Ellery’s solution that attempted to tie up some of the novel’s loose ends. Those loose ends had always troubled me -- there are a lot of hidden clues in And on the Eighth Day that are never explicitly addressed in the pages of the book. After reading my conjectured epilogue, Kurt, who oversees the Queen sub forum, responded with some thoughts and we were off and running.

And a strange email exchange it has, at times, been over the years. Early on Kurt asked me if I knew the name that arguably tied together a large number of the Ellery Queen mysteries. I replied that I did not and Kurt responded with the following. “The name is ‘Andrews’.”

Well, as you can imagine, that sort of floored me for very personal reasons. I had read Queen for years, but this was before I had begun to look behind the stories into the strange and largely inexplicable patterns and clues that Frederic Dannay and Manfred B. Lee wove into the fabric of the Queen library. But even so , , , my own name? In any event, Kurt proceeded to reveal a list of references to names closely associated with the name “Andrews” that appear in Queen, and the list stunned me -- I hadn't even noticed the multitude of characters who bore the name “Andrews,” or who answered to a closely related name. The list included:

Hidden patterns in Ellery Queen mysteries, I now know, are rampant. One of the best examples of this is the recurrence of references to Easter, a topic discussed at some length in a previous post. Other examples involve the use of dates that are either of personal importance to Frederic Dannay and Manfred B. Lee, who were Queen, or that are of historical interest. Those, too, have been explored in a previous article. Were these multiple references to the name “Andrews,” some of which, after all, are only associated with minor characters, enough to be classified as similar intentional patterns? As Kurt pointed out to me in our correspondence, French Queen scholar Remi Schulz certainly thinks so. 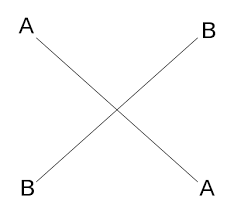 Remi Schulz has devoted years, and much effort, to the study of the Queen mysteries, plumbing analytical depths that most of us would never even suspect existed. One underlying thesis set forth in Remi’s website is that the Ellery Queen novels are replete with hidden patterns that are premised on recurring dichotomies. Thus, Remi argues, a series of later Queen novels involve murderers with the recurring initials M and W, that switch back and forth chronologically novel to novel. M and W, Remi points out, are a short-hand for one of life’s great dichotomies: men and women. Similarly, there are references to 1 and 2, and to “A” and “B” that recur in Queen mysteries. As an example, Remi focuses on the 1936 Queen mystery Halfway House, and points out that it involves two families, Angell and Borden, and secret relationships between Andrea Borden and Bill Angell (AB and BA). These are but examples -- Remi points out many other hidden dichotomies in the mysteries Ellery solves. 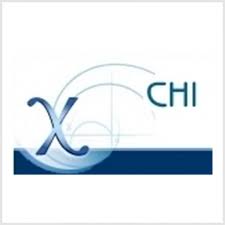 So what do these “either or” patterns have to do with the also recurring references to the name “Andrews?” Well, first of all, Remi’s view is that you can’t view the references to that name standing alone -- you have to look at all of this in the context of those other clues and patterns. Remi argues that the term most commonly used for the recurring literary dichotomy device that he identifies as prevalent in Queen mysteries (A’s and B’s, 1’s and 2’s) is a chiasm, a word that derives from the Greek letter 'Chi', or 'X.' An X, he points out, is also the basic design of the Saint Andrew cross -- a cross, in effect, laid on its side. Thus, it is argued that frequent use of number and letter pairs, and frequent use of the name “Andrews,” are employed to show that chiasms -- and underlying dichotomies -- are a hidden theme in the Ellery Queen mysteries.

And what, in turn, could this pattern of dichotomies be intended to convey to the reader? Well, the most obvious chiasm “secret” behind the works of Ellery Queen is, of course, the fact that there are two aspects to Ellery as author -- Frederic Dannay and Manfred B. Lee. Up to here I find Remi’s theories a bit far fetched, although still plausible. But from this juncture on Remi and I tend to part ways, forming, perhaps, our own chiasm.

Remi’s overarching thesis is that Dannay was the mastermind behind Queen, and that various hidden clues in Ellery Queen mysteries are meant to convey this, as well as the “fact” that Manfred Lee had (in Remi’s view) little or no role in the writing process. I’m not going to delve too deeply into Remi’s theory since it really cannot be articulated without revealing spoilers for many of the Queen mysteries. However, those interested in the theory can pursue Remi’s thesis at his website. (A warning -- Most of Remi's website is written is in his native French. However the Google translate function works fairly well on the site. Some of his theories concerning Ellery Queen mysteries are explained in a shorter English version of his website here.  Remi’s theories are also summarized on Kurt’s website here and here.)

My own view as to what this all might mean, while also a bit complicated, is a simpler one. (Warning -- even mine involves one “spoiler.”)

I share Remi’s view that a plausible explanation of the recurring use of chiasms, as well as the references to “Andrews” as a clue to point the reader to the Cross of St. Andrews, is that all of this evidences (in a manner subliminal to the actual clues needed to solve each individual mystery story) the fact that two authors, Dannay and Lee, were Ellery Queen. The duality of Queen, as author, is also evidenced by the fact that both Dannay and Lee followed the consistent practice of using a “Q” with two, rather than one, line through it whenever autographing a book as Ellery Queen.

But it seems to me that it is ultimately self-defeating to argue that these hidden references were somehow meant to demean Lee’s role. After all, but for the few later Queen mysteries written by ghostwriters when Manfred Lee battled writer’s block, it was Lee who penned the actual drafts of the Ellery Queen mysteries from Dannay’s outlines. And even in the ghostwritten works it is acknowledged that Lee edited the final drafts. Can we really expect that Lee would be a party to a scheme intended to demean his own role?

In fact, there is at least some evidence that Lee could be a bit of a prankster himself, and was not above sneaking references into the Queen mysteries behind Dannay’s back. The best example of this is one particular late Queen novel (that’s all I’m going to say!) in which the name of the murderer appears only twice -- on the opening and closing pages. When asked about this literary device in a televised interview Dannay reportedly was taken aback, rather obviously surprised by the literary trick. So if that response by Dannay was honest, then the trick was by Lee. A trick that involved a secret cleverness -- a cleverness involving a name.

The issue of employing “cleverness” with chosen names also brings us back to both Lee and Dannay -- each of whom chose their own names. Frederic Dannay was born Daniel Nathan, and Manfred Bennington Lee was born Manford Lepofsky. Lee, like his cousin Dannay, was of Russian-Jewish ancestry, but (unlike Dannay) eventually converted to Episcopalian. As Dannay’s notes in The Tragedy of Errors indicate, the cousins referred to each other throughout their lives as “Man” and “Dan,” evocative of both their given names and their chosen names.

And what do we know of the name “Andrews?” Well, in the Bible Andrew was the brother of Peter, and was himself a disciple. Legend has it that Andrew preached in Russia, in the Black Sea area of the Ukraine, and that his remains were eventually carried to Scotland, where he became the patron saint of the country and inspired that cross of St. Andrew, which graces the Scottish flag. Lee and Andrew, therefore, had a shared background, in a sense:  roots that involved Jewish Russia, and relocation to an English speaking locale. Each was born Jewish; each died Christian. So there is a credible basis to hypothesize that Lee could have personally identified with Andrew. Could the recurring usage of Andrews, and names closely related to Andrews, constituted Lee’s “signature” to the Queen mysteries? Are any of the foregoing similarities enough to deduce anything? The question still remains: What does Manfred Lee, as a name, have to do with Andrews?

Well, perhaps this: The name “Andrew,” “Andrea” in Greek, is translated as “manly.” Or, phonetically, “Man Lee.” In other words, the joke here, once again, may have been on Dan!
Posted by Dale Andrews at 00:01 4 comments