by Louis A. Willis
After reading Leigh’s post on the comma, I remembered reading two articles about the changing way the period is being used, and an article on the uselessness of the apostrophe. I decided to write my first article on the attacks on punctuation. 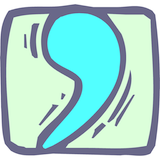