Gratuitous Violence:  In literature, violence that is “unearned,” “unwarranted,” or “unjustified.”

Collateral Damage:  Used euphemistically to refer to inadvertent casualties and destruction in civilian areas in the course of military operations.

Last month driving back from the Gulf Shores of Alabama Pat and I (finally!) finished listening to World Without End by Ken Follett.  It took us a little over a year to get through this magnum opus since we only listen to audio books on car trips and since the narrated version of this particular novel weighs in at something over 45 hours.  The book is a sequel to a Follett classic -- Pillars of the Earth, which we also listened to and which deals with the building of a cathedral in the imagined town of Kingsbridge, England.  World Without End picks up the story two hundred years later, and focuses on the same church and the surrounding community and priory.

Pillars of the Earth came in at number 33 on the BBC’s survey of 100 best loved books and was introduced to U.S. readers by Oprah Winfrey.  Ken Follett is also the author of a new trilogy focusing on world history from the late 1800s through the Cold War, two volumes of which, Fall of Giants and Winter of the World have been published.  I've listened to the first of these, and the second is queued up for our next car trip.  So, as you can see, we are Ken Follett fans.  He is is a great writer, and I read or listen to virtually everything he writes.  It was therefore with high expectation that we downloaded World Without End.  Probably 95% of the book was a very good read (err, listen).

The rest was not.

Stated simply, Follett (like a worrisome number of other authors) has what I find to be an unpleasant penchant for serving up detailed and unnecessary violence, inviting the reader to join him as he wallows in the torture, the blood and the death throes of others.  Lord knows we have enough of this in the real world without being subjected to it in the fiction we choose to read.

Wait a minute, I hear you mutter.  This is SleuthSayers.  Virtually everyone here writes murder mysteries.  Certainly I have to plead guilty on that score – every Ellery Queen pastiche I have written kills off at least one character.  And various Ellery Queen parodies over the years have joked that those who allow themselves to stand too close to my friend Ellery must have a death wish since, invariably, someone in close proximity to the famous detective will die. 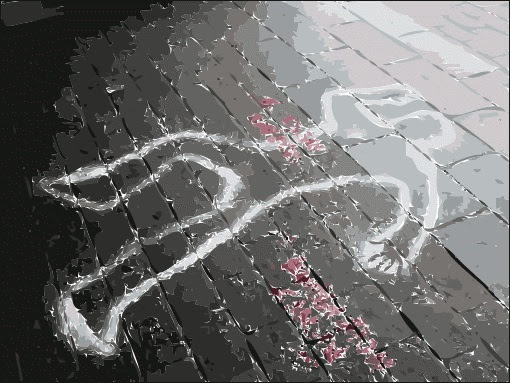 But there is a difference between the manner in which a Golden Age mystery typically portrays death and how it is handled by others, including Ken Follett, who, for whatever reason, allow themselves to become obsessed with the death itself.  The focus in the mysteries of Holmes, Christie, Wolfe and Queen almost invariably is not the violent act, but rather the detective's ability to use the deductive process to determine who committed the act and, even more importantly, how and why.  The violent act – the death of a character – is a necessary prerequisite to the deduction.  But that is it -- the stories are not about how people die, they are about how mysteries are solved.  As a result, the author generally does not force or expect the reader to sit through the details of the process of dying.   Indeed, more often than not writers of golden age mysteries leave death neatly off stage, or at the least take a deep breath and then try to get past the fact of death as rapidly and respectfully as possible.  Death is not, after all, why we are there.

And to me this captures what is wrong with Ken Follett’s handling of violence and death.  Winter of the World, like those mystery stories discussed above, is also not about death -- it is about the cathedral, and the lives of those living in its shadow.  True, death is a part of life, for Follett's characters as much as for the rest of us.  But unlike many of his writing colleagues Follett renders his kills in excruciating  detail and on center stage.  Thankfully a reader can skip pages, and a listener can fast forward, but if one reads, or listens to, every page of World Without End -- which, I emphasize, again, is otherwise a very well done piece of literature -- he or she will learn all there is to know about various ways to impale people, what it is like, minute-by-minute, to be burned at the stake, how to skin a thief while he is still alive so that his hide can eventually be nailed to a church door, how to bate a bear while killing it, the detailed process of how best to torture a cat to death while onlookers bet on how long the creature will continue to breathe.   I cover these incidents in three lines of text, but each (and others) comprise many pages of World Without End.  (I haven’t seen the miniseries version of World Without End but I am told that there the producers decided -- what the Hell? -- to set fire to a central character who otherwise survives the book version  un-charred.)

And why, one must ultimately ask, does the story vector into one of these episodes every 100 pages or so?  Unlike the deaths that must occur in order for a classic mystery to progress, or that are otherwise necessary for Follett to tell us the story of his cathedral, each of these incidents, particularly in the degree rendered by the author, is completely unnecessary to the progression of the story.  If anything, much of the violence interrupts Follett’s narrative of the church, the community, and the priory.

Which leads me back to the quotes at the top of the article.   I do not like the notion of “collateral damage” in the real world – the premise that some innocent death is necessary in order to render a greater good – but I understand it.  I can also understand, and use, the concept in fiction.  It is what mystery writers do to an unfortunate few of the characters that we create.  Our victims may be innocent, but they sometimes still need to die, and at our hands.  We accept that they must do so in order to progress the story, to portray the character of the killer, or to lay a foundation for the deductive process that will ultimately unravel the murder in order that the villain can ultimately be unmasked.   However, while our characters are only born from our imaginations, this is no excuse to subject them to unnecessary violence – if we are good at what we do, we commit a great deal of effort attempting to bring our characters to life.   So why kill them without a reason?

I can push this analysis uncomfortably further down the spectrum.  For example, I have enjoyed the entire Hannibal Lecter series by Thomas Harris.  The violence that Harris subjects the reader to may at times be every bit as graphic as that portrayed by Follett in World Without End.  But there is a difference – each act is necessary to understand Hannibal, and therefore to progress the story.  The same can be said of the new NBC series Hannibal -- you may not like the underlying story but it cannot be told without also depicting the underlying violence.

By contrast, nothing in Mr. Follett’s story is furthered by devoting pages to describing how to skin the thief alive, how to bate the bear, or how to torture that cat to death.  Those episodes  serve no purpose other than to perhaps titillate a reading public with tastes far different than my own, and I hope, different than most of ours.  When Follett stoops to this in the course of an otherwise interesting plot the violence is (again hearkening back to the top of the article) “gratuitous.”  It is “unearned,” “unwarranted,” and “unjustified.”

In the end, we each have the freedom to write to our own tastes and within the constraints we impose on ourselves.  In the marketplace it is the reading public that will ultimately determine what and how much it is willing to take in.  But at base I share the view of writer and educator Jack Harrell who has grappled with the ethics of violence in What Violence in Literature Must Teach Us, an essay that comprises one chapter of Ethics, Literature, Theory, edited by Stephen George (Rowan & Littlefield 2005).


When the writer inflicts violence in fictional characters, three conditions must be met in order for the violence to be warranted, in order for it to have moral and aesthetic value.  First, the character must be presented in such a way that the readers are able to care about them.  Second, given the plot and circumstances, the violence must be inevitable.  And third, there must be sufficient tension in the story:  the violence itself must be challenged by an equal, opposing force.

I think that Harrell comes close to nailing a general rule for the use violence in fiction.  But I also think that any rule, or approach, is difficult to apply with certainty in the writing process since there are, after all, an infinite number of stories out there.  There are churches, and there are also cannibals.

Broader guidance may be gleaned from a source a bit further removed from the field of fiction -- the late Supreme Court Associate Justice Potter Stewart.  When the Court grappled with the issue of how to craft a useful and generally applicable definition for “obscenity” in the 1964 case Jacobellis v. Ohio, Stewart, in a concurring opinion, offered the following rule for situations amorphous enough to make the articulation of specific guidelines difficult.  Justice Stewart’s proposed approach to identifying obscenity was this:  “I know it when I see it.”

So, too, gratuitous violence.
Posted by Dale Andrews at 00:01 7 comments