The Hustler came out in 1961, with Paul Newman as Fast Eddie Felson and Jackie Gleason, memorably, as Minnesota Fats.  For those of us who’d been denied a misspent youth – “You’ve got trouble, right here in River City, with a capital T, and that rhymes with P, and that stands for pool” – the movie was a crash course.  I didn’t actually start playing pool myself until a couple of years later, in college, but I tried hard to make up for lost time.

One of my closest pals at , John Davis, was as rabid a movie buff as I was.  We could quote entire chunks of Lawrence of Arabia to each other; we went to revival houses in Alphabet City to see Seven Samurai and Look Back in Anger, or Paths of Glory; and the time when Albert Finney showed up at the Hagen-Berghof studio where John was taking classes was something akin to the Annunciation (Tom Jones had just been released; Finney was doing Luther on Broadway).  But the biggest solid John did me that fall was to take me down to Times Sq. one early evening, and on a short walk up 7th to the corner of 44th, and then, parting the curtain, so to speak, up the narrow flight of stairs to Ames.

Ames Billiards is where The Hustler was shot.  It was a second-floor loft space, low and smoky, although in fact they dressed the place down for the picture.  had good lighting and clean restrooms, and people were there to shoot pool, that’s what it was about.  You could get hustled there, yes, but if you were smart, you minded your own business.  wasn’t the place to get into a money game, you’d lose your shirt.  I had my hands full trying to take the boys in the frat houses on .

I got my comeuppance a year or so later, when I was in the service.  I met guys in the Air Force who could have put themselves through college playing pool.  Andy Gonzales was one of them.  He had enormous concentration and grace.  It was like watching a big cat.  The languor, and then the sudden application of force.  There was a pool table in the Day Room, so we’d play after lunch, before afternoon classes.  There was also a snooker table, the first time I’d tried one.  The difference is, the pockets on a snooker table are a lot tighter than they are on a pool table.  They’re unforgiving.  If you’re used to the sloppiness of eight-ball, and the sized-down pay tables in a bar, snooker ain’t the game for you.  It requires discipline.

There are a couple of places here in where I used to shoot pool occasionally.  One of them was Garrett’s Desert Inn, which was not quite a dive bar, too well-lit, but very local.  The people who worked across the street in the State Land Office came in for Happy Hour.  Garrett’s fell victim to the If-It-Ain’t-Broke-Don’t-Fix-It syndrome.  The owners decided to go upscale, and stepped on their dicks.  They remodeled, and went through half-a-dozen tenant restaurants, and none of them have had legs.  The other place was the Catamount, on .  Dollar wings, wide-screen TV’s, a sports bar.  But upstairs, they had full-size pool tables.  Not the kind you feed quarters into, real tables.  They went out of business, but I see construction permits posted, so maybe there’s hope, and they’ll reopen.  Pool table slates are heavy.  You’d have to close off the street and bring in a rigging crew, with a crane, to lift those suckers out. 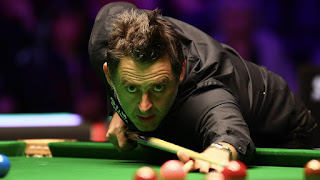 I’m embarrassed to admit that I’ve been getting my fix on YouTube.  Snooker is big business in the and the former Crown colonies.  Guys like Ronnie O’Sullivan (the Rocket) and Neil Robertson (an Aussie, the Wonder from Down Under), and Ding Junhui (Enter the Dragon), make real money.  Ronnie the Rocket has a net worth of 14 million bucks and counting.  (He’s also lent his name to a couple of ghostwritten thrillers, but I don’t hold that against him.)

You should watch this guy shoot. 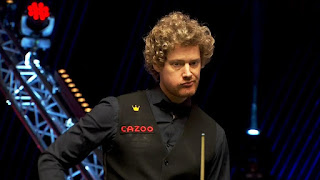 Snooker turns out to have arcane rules.  You need to see a couple of games before you begin to figure it out.  And like baseball, it takes as long as it takes.  There aren’t predetermined limits, like hockey or football.  Everything is about position.  You don’t just make the impossible shot, you have to leave yourself with a better one.  It’s about building your score, and the perfect score in snooker is 147.  Fifteen reds, at a point apiece, fifteen blacks, at seven points, and then all six colors, for twenty-seven.  Trust me, you just have to watch, and you’ll pick it up. 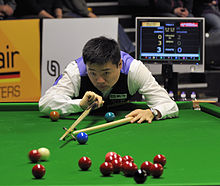 The reason they call Ronnie O’Sullivan the Rocket is that his best time for a perfect game is five minutes and eight seconds.  This is jaw-dropping.  It means you’ve sunk thirty-six balls.  (When you sink a color, it’s re-spotted on the table.)  This means Ronnie is pocketing a ball every eight-and-a-half seconds. 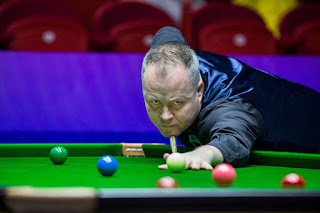 As far as I’m concerned, these guys are like gunfighters.  “I’ll count to three, you can draw on two,” Wyatt Earp tells Andy Warshaw, but Andy says he doesn’t want such a chance.  Snooker is much the same.  Once you slip, and leave the table unprotected, O’Sullivan or John Higgins or Ding are going to clean your clock.  Maybe it’s not as exciting as a gunfight, but it sure as hell is final.  When you get beat, you lose to the faster draw.