If you've watched any of the coverage of the Olympics, you may have noticed a few shots of the Tower of London.  It's the most visited spot in that most visited city, and also contains the fabulous crown jewels of the royal household.  It was also the last place that Edward York, and his younger brother, Richard, were ever seen.  Edward was twelve and awaiting his coronation as King Edward the Fifth.  Richard, nine, would have been next in line to the  throne.  The year was 1483, and their Uncle Richard, shortly to become Richard the Third of Shakespearean infamy, was the Lord Protector of the Realm.  He had placed the boys in the tower in order to protect them as befit his title.  A little over the top, perhaps, placing them in what amounted to a prison, but Richard never did anything by halves.  After all, his recently departed older brother, King Edward the IV, had charged him with guiding and protecting his heir until he should attain his majority.  Richard insisted that he was doing just that.  What was he protecting them from, you might ask?  Their mother and her meddling brothers, quoth he.

Since coming out as the winners of the War of the Roses, as it came to be known, the Yorks had been top dogs in Britain for a number of years.  Those who had opposed them and supported the Lancaster branch of the Plantagenet family had been largely silenced and suppressed.  As King Edward's trusted lieutenant, and youngest brother, Richard had been a large and heavy hand in the undoing of their enemies.  Neither his courage or loyalty had ever been an issue.  Upon learning of his impending death, Edward had entrusted him with the welfare of his heirs, as well as that of his kingdom.  At this particular juncture in history, the future Richard the Third, was not a villain, but one of the most respected men in England.  What happened?

Simply put, the princes were seen less and less, until they were seen no more, to paraphrase a famous quote.  What happened to them, and why, has haunted historians for centuries, resulting in near-countless books and theories on the subject.  Kings and clergy, commoners and laity, have been bedeviled by this mystery, at the heart of which lies two young boys torn from their mother, imprisoned, and most certainly murdered. 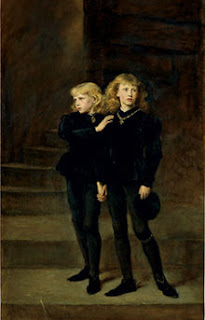 Traditionalists, from St. Thomas More to Shakespeare, have long laid the blame squarely at the feet of Richard.  The Defenders, as we'll call them, cry nay; that he has been unfairly framed and libeled for crimes he never committed.  Josephine Tey's famous mystery novel, "The Daughter Of Time" lays out an alternate history in which Richard is exonerated.

Let's look at what is known: The boys' father, Edward IV, died a successful, and largely well-liked king.  He had wrested the crown from Henry VI, a sad fellow prone to extended bouts of insanity, then proceeded to rule in a pretty even-handed manner to the betterment of the nation.  His personal life was a bit bumpy, as he was a serial philanderer and all-round sensualist, but hey, he was king.  His over-indulgence in wine, women, and song, would ultimately result in his death.  It also gained him a wife in the form of Elizabeth Woodville.  The Woodville Clan were a large and ambitious family of climbers that scored big time when Elizabeth reeled in Edward.  She quickly produced the required male heirs and they were set.  All of her brothers, whom Edward got along famously with, received titles and vast estates.  In the blink of an eye they had gone from obscurity to peerage and power.  Times were good.

One problem lay on their horizon, however--Richard did not trust them.  And with his brother's death, he felt it imperative to separate Edward's sons from their baleful influence.  Accusing them of  plotting treason, he succeeded in having one of the uncles executed.  It's possible that he believed his personal estates and titles might be at risk should the Woodvilles poison the young king-to-be against him.  In any event, it's clear he intended to tightly box them in.

What followed is perplexing in the light of Richard's history up to this time.  Firstly, let me point out that unlike his depiction in Shakespeare's play, there is no evidence that he was either club-footed or afflicted with a hunched-back.  It is possible, based on a few portraits, that he may have had one shoulder slightly higher than the other--hardly the debilitating afflictions portrayed by so many actors over time.  The fact that he was a successful horseman and warrior argues against such depictions.  Secondly, he had been his elder brother's right-hand man and strong arm, particularly in the restive North.  There, Richard had brought the tempestuous lords to heel and gained their respect.  The only hint of something sinister in his character stems from the death of their middle brother, Clarence.  Like the boys that would come after, the accusations leveled against him were never fully proven and composed mostly of innuendo.  Clarence had been untrustworthy during Edward's climb to power, switching sides against his brother and then back again; being critical of his actions.  This kind of behavior never bode well for any practitioner in medieval courts.  Remember, this was the age of Machiavelli, Vlad the Impaler, and the odious Gilles de Rais.  Clarence did not appreciate this sufficiently and was said to have been drowned in a cask of malmsey--a type of sweetened wine popular at the time.  That is the legend that has survived and not necessarily the truth of the matter.  He was dead, killed for treason, and that is indisputable.  Life was short, brutal, and nasty even for royals in the 1400s. 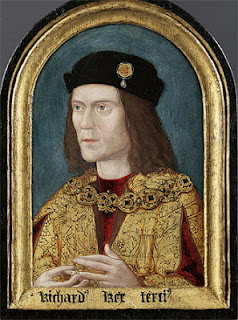 It was no different for the princes--by the end of the summer of 1483 they ceased being seen at their windows.  Richard, in the meantime, had discovered a mistress of late brother Edward's that he had "betrothed" prior to his marriage to Elizabeth...and in front of a bishop, no less!  A betrothal at that time was tantamount to a proposal of marriage today, but carried legal, and more importantly, moral weight--it was regarded as an enforceable contract in both civil and ecclesiastical terms.  Edward had routinely used this ploy in order to gain access to attractive young ladies' boudoirs.  It would now come back to haunt his heirs.  It meant that Edward's marriage to Elizabeth was invalid...and much more importantly, that their issue were illegitimate!  This was promptly endorsed by the Privy Council and Richard was suddenly the next in line to the throne.  These glad tidings were put out to the people who greeted them with a subdued, and directed, chorus of "For He's A Jolly Good Fellow."  A few voices enquired as to where the "former" princes might be...as they were not a threat to the throne, perhaps they could be produced.  As might be expected, the Woodvilles and their supporters were keenly interested in the answer to this.  They were to be disappointed.

Richard's coronation went forward as planned, and he simply refused to produce the boys for inspection.  He did deny that they were dead, or that he had murdered them.  He remained their protector, it seems, though they were no longer heirs and therefore should have needed no protection.  He got on with ruling his kingdom and eradicating a few problem subjects along the way.  The muted clamor became more an urgent whisper rarely heard.

By 1485 Richard the Third was dead--betrayed by the Northern lords he trusted, and slain on the field of Bosworth in yet another contest for the crown.  Henry Tudor, with far less claim to the throne than Richard, was now Henry VII of England.  He seems not to have found any princes in the Tower of London.  Or didn't he?

Some theorists, including Tey's bored detective, come to the conclusion that it was Henry that had the boys killed.  That after discovering them, and understanding the threat they represented to his newly-won crown,  he promptly had them murdered and their bodies hidden away.  It's a good theory, but it is predicated on the boys being alive in 1485.  If so, then where were they for all that time?  And why wouldn't have Richard produced them?  It could have made life easier for him.  Of course, young Edward V might have become a rallying point for Richard's enemies in spite of his so-called illegitimacy--there were many who did not buy the betrothment story or Richard's claim to the throne.  But, it would also have demonstrated that he had been a true protector of his brother's children and not their murderer.  In any event, he didn't do it, effectively damning himself as a usurper and regicide...not to mention a really bad uncle.

Others claim that the boys were murdered by the Duke of Buckingham, an early supporter of Richard's who may have acted on his own in hope of preferment.  Some split hairs and blame James Tyrrell, a lackey of Richard's who got a lot of nasty work done for him.  If so, he did it on Richard's orders, which is all of one piece to me.  He had no known motives but that of pleasing his boss.  Henry VII later had a confession tortured out of him, for what that's worth.

As to what really happened to the princes, we shall probably never know.  Yet I will side with the traditionalists on this one.  It just makes the most sense to me.  I'm not sure, of course, that Richard set out to murder his nephews, or even to assume the throne.  But once he had them, I suspect it dawned on him rather quickly the chance he had seized--why settle for only maintaining his estates upon the ascension of young Edward and his grasping family, when he could have it all?  He simply couldn't resist.  Perhaps, at first, he was content to only make them bastards in the eyes of the law, but at some point, after gauging the simmering opposition, he decided to remove them altogether--there would never be an heir to build a rebellion around.  But as Sir Walter Scott pointed out, "Oh what a tangled web we weave, when first we practice to deceive."  Richard had created a conundrum for himself--he could no longer produce the boys, though by his own words, there was no legitimate reason for him not to do so.  Perhaps it wasn't just a new king that arrived less than three years later at the Battle of Bosworth, but justice.

As a somber postscript, the disarticulated skeletons of two children were unearthed in 1647 during renovations to the tower.  These were believed to be the remains of the two, long-missing princes.  Befitting their status, they were reinterred in Westminster Abby.  Their grave was reopened in 1933 for modern medical examination, and the remains determined to be between the ages of seven to eleven, and eleven to thirteen, respectively; closely matching that of Richard and Edward.  This was all that was definitively learned, and there has been no permission given since for further examinations.