The near ox died at noon. After prayers, we buried our little Bessie beside the loyal beast, then continued south at wagon train speed.

So it seemed. I was volunteered to drive a 40-foot, 33,000-pound machine a thousand miles from Indianapolis to Orlando. (12m, 15,000kg, and 1600km, respectively) I’ve driven that distance straight through, but not a 16½-ton covered wagon the size of a Greyhound bus: Freightliner chassis, Caterpillar diesel engine, Allison transmission, a flippin’ huge RV.

I haven’t driven anything that size since young and foolish teen years driving large, dual-axle trucks semi-legally (notice author’s clever avoidance of the word ‘illegally’) for a legislator who interpreted his state’s labor and highway laws loosely.

With three drivers and only two vehicles, the trip should have been a snap, right? Except…

It’s like that puzzle of the weird guy at a river who wants to ferry a chicken, a fox, and a sack of grain in a rowboat that can accommodate only one thing at a time (setting aside the obvious question of why he’s carrying around a fox drooling over his pet chicken). See, one of the drivers couldn’t drive the big motorhome. One person couldn’t drive at night. Another party (me) wasn’t permitted to drive the car. I was told that’s because of my out-of-state license, but I suspect it had more to do with a previous encounter with an elk. Furthermore, parties with XX chromosomes suffered motion sickness. Coincidentally, said motor coach suffered XX passengers’ deep fingernail gouges in armrests when XY chromosome driver gleefully hurtled down twisting Tennessee mountain roads. Ahem.

After fighting high winds and icy roads either side of Louisville, we holed up in Murfreesboro, Tennessee to gather strength. From the rolling, twisting, pitching hills, two drivers took sick… consumption or maybe cholera. Another driver (me) was running critically short of sleep.

We opted for a motel rather than further strain the RV’s sensitive plumbing. The motel, which shall remain anonymous, featured two unique amenities.

First, the immaculately tiled bathroom stank like a water buffalo died. We came to suspect the stench was piped in through the ventilation system from room 127, a room where Bobby MacAllister caught his wife in bed with his best friend Buddy Hatfield, in flagrante delicto you might say. He shot them both, hung a ‘Do Not Disturb’ placard on the door, and paid for the room for the next six months. I’m pretty sure I’m correct.

Second were the fine acoustics that allowed us to hear every nuance of neighbors on either side. Room 125 thoughtfully tuned in the shopping channel for the entire night. I’m not sure how mental exhaustion played into it, but I’m now the proud owner of genuine 45kt zirconia earrings, a set of exquisite, hand-painted vice president portrait collector’s plates, and a complete set of Rachel Ray engraved Chinese-quality knives– and I’m not even sure who Rachel Ray is.

The other neighbor (for those who suspect I’m susceptible to hyperbole, I swear this is absolutely true) had a bangin’ good time… again and again… loudly… at length (pardon the pun).

Session № 1 commenced at 02:54 –that’s AM in the bleedin’ early morning– and ended at 03:11. For the really good at math, that’s more than a quarter of an hour of energetic bunny rabbit bumping. After a mere ten minutes, my lower back muscles began to ache in sympathy. Guys know what I’m talking about.

After fifteen continuous minutes, one of the women suggested loudspeaker lady was alone and “really spanking it,” whatever that meant.

Eventually the participant(s) wore out and went silent. We settled in, trying to sleep to a sales pitch for the Rachel Ray Chinese macramé kit, which if ordered now, included a matching tea cosy and serviette ties.

Session № 2 commenced at 7:14. I swear that time’s accurate because I’d blankly stared at the clock for hours. This session waxed as enthusiastically as the previous bumps in the night.

I’m ashamed of the womenfolk, I really am. Granted, once again they were abruptly awakened, but what good are all those romance novels if one nips flowering love in the bud? I’m talking their loud clearing of throats and not-so-discreet coughs while I’m hushing them, “Shhh! Shhh!”

I’ve studiously ducked that no-win discussion whether men are more logical than the opposite sex, but when admittedly half-asleep women in a motel call out, “Get a room!” I retreat back to my cave to avoid debate.

After delicious Waffle House carbohydrates served by country’s most patient waitresses, the wagon train again hit the road. What is it those FedEx tandem trucks have against me? Barely three minutes into the journey, one of FedEx’s semis towing twin trailers passed me… almost… before it pulled back to the right lane… with me still there. Apparently the driver forget he was hauling two wagons.

This marked the second time I was attacked by a FedEx tandem rig. The day before, a speeding driver in heavy winds nearly sideswiped me and others as the semi serpentined down a mountainside from median to right shoulder and back again. At the bottom of the slope, the road straightened and the driver regained control, whereupon he headed to the nearest Pilot truck stop to wash his jeans.

On the way and at loose ends, we’d discussed where to celebrate Thanksgiving dinner. The tally had run against me 2-to-1. My companions opted for Cracker Barrel. I don’t have anything against crackers or barrels, but I have this prejudice about the evil lovechild of a rooster and a cow called chicken-fried steak. I mean, how bad does a meat slab have to be to rekill it with a hammer, bread it and deep fry it? Maybe it’s just me. With visions of steak-fried turkey dancing in my head, we pulled off I-75 at Exit 333, Dalton, Georgia.

I’m not saying West Walnut Avenue isn’t made for motor homes, but skateboards would feel more comfortable among its dips, hollows, and tight turns. In fact, a number of RVs could be found there, caught, I believe, in a sort of giant Venus flytrap.

I inadvertently (or perhaps Freudianly) passed the street to the Cracker Barrel. With a charming brick median and short, narrow streets, I had to figure out how to turn around.

My co-pilot suggested reversing in the Steak ’n’ Shake parking lot perched atop a hill. I looked aghast at it. This flatlander’s not saying it was steep, but goats rappelled up the slope with T-bars. Best I could make out, my navigator meant the tilting 14-foot tall (4.25m) vehicle should tiptoe low-gear up a dangerous, curving slope and suicidally leap off the cliff into the correct lane. That’s my theory.

I chose to squeeze through a bank parking lot where my graceful U-turn back onto Walnut resembled… well, picture a twelve-foot high, fifteen ton, unbalanced washing machine determined to shake its way out of a laundromat.

Further misadventures ensued until we found the backside of Cracker Barrel and parked in a mall lot. Here, my friends, our story took a charmingly unexpected turn.

The Kindness of Strangers

I love people who don’t ‘act’ polite and caring but *are* polite and caring. I want to be a Southerner, I really do. Except for cracklins. My grandmother cooked grits and cracklins. I love Southern food but I could not abide hominy or pork rinds, a sad defect in my genetic makeup.

Two gentlemen of Dalton who’d parked nearby noticed my forlorn look as I foot-dragged toward the Cracker Barrel. John and Steve were headed toward a tavern called The Oyster where, they explained, we could eat homemade Thanksgiving dinner without charge. Gratis. Free. 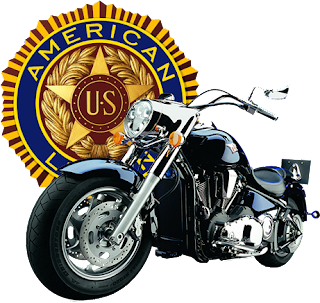 I didn’t understand how that was possible, but we took them up on it. Thanksgiving in The Oyster turned out the highlight of the trip.

Thanksgiving dinner was sponsored by a local consortium underpinned by local American Legion Riders, as explained by John Brown, Assistant State Director of the Department of Georgia. They made a tradition of inviting folks who couldn’t be home for the holidays.

Loved it! We enjoyed ourselves and the food… oh, that Georgia cooking. The turkey breast, moist and tender, ranked right up there with the best. Great corn. Homemade mashed potatoes, another weakness. People enjoying themselves.

Thank you, Dalton, Georgia. Thank you for the kindness of strangers.
Posted by Leigh Lundin at 00:00 5 comments