Pagliacci, or, Killing Your Lover is as Old as the Hills I went to the opera last weekend - The Met Live in HD at the Sioux Falls Century 14, big screen, great sound, and subtitles, what more could you ask for?  They were showing Pagliacci.  Now I'd heard about that opera all my life - everything from people on the old Ed Sullivan show singing their guts out to an Elmer Fudd parody.  But I'd never seen it, so off I went, and enjoyed it a lot.  Good old drama:   jealousy, threats, attempted rape, betrayal, adultery and murder.  What's not to like? Plus a play-within-a-play (which I am always a sucker for).

The plot is simple:  Act One:  Traveling players, commedia dell'arte, arrive in a small Sicilian town, and set up shop.  Canio (who plays the clown Pagliacci) is married to the beautiful Nedda (who plays the romantic heroine Columbine).  The foreshadowing was the joshing about how (on stage) Columbine cuckolds Pagliacci every night with Arlecchino (Harlequin), and Canio said, hey what's on stage is fine, but in real life, I'd kill her.  Cue the dramatic music, and they did.  On comes the big thug Tonio (who plays Taddeo, a servant in the play-within-a-play), who wants Nedda and tries to rape her.  She drives him off with a whip and he vows revenge.  So he overhears and then oversees Nedda meeting up with her real lover, Silvio.  He goes off, tells Canio, who gets drunk and weeps his aria, "I Pagliacci" while he puts on his white clown make-up.

Act Two:  The Harlequinade, as Columbine gets ready for her tryst with Arlecchino. Taddeo wants her, she drives him off.  Pagliacci arrives - but Canio/Pagliacci is murderously drunk and playing for real. (The audience, bloodthirsty as they come, is enthralled by his realism.)  He chases her around the stage, they fight, and he stabs her to death.  With her dying breath she calls "Silvio!" and, as Silvio fights his way up onto the stage, Canio/Pagliacci grabs him and stabs him to death, too.  And then turns to the audience and cries, "La commedia è finita!" – "The comedy is finished!"  Short, sweet, violent.

Pagiliacci, Cavallere Rusticana, and other operas were all part of the versimo movement of the late 1800's.  Naturalism!  Realism!  Lots of violence!  Lots of sex!  Bodies piled up on the stage!  (like that hadn't been done before - hadn't they ever noticed the Shakespearean body count?)  And, of course, everyone is no good.  Very much like film noir.  The literature of the day was the same:  whenever you want a good, depressing time among adulterers, thieves, murderers, whores and corrupt politicians, try Emile Zola's brilliant, harrowing, brutal Therese Raquin, Nana, and La Cousine Bette.

And they also love magic, dance, and romance.  Which is also at the heart of Pagliacci.  The Harlequinade that Canio and Nedda perform in Act 2 is straight from the commedia dell'arte, a staple and source of European entertainment for centuries, which always involved romance and sometimes murder. Characters from the commedia show up in Mozart operas, Shakespearean plays, and innumerable other operas and ballets.  And mysteries:  Sir Peter Wimsey dressed as Harlequin for half the plot of Murder Must Advertise, and Agatha Christie used the commedia over and over again as a trope or theme or a plot point, and at one point even a character - Harley Quin, who appeared in at least a dozen short stories.

The original commedia dell'arte was all about lovers (innamorate) who wanted to marry, but were hindered by elders (vecchio) and helped by servants (zanni).  In the old companies (old being 1500-1700s) there would be 10 characters:  two vecchi (old men), four innamorati (two male/female couples, one noble or at least middle class, the other lower class or downright clowns), two zanni, a Captain and a servetta (serving maid).  That gave plenty of characters to interfere with the two classes of lovers.


BTW, this structure of thwarted/thwarting/attempting to thwart lovers, operating on two levels, is an old plot device.  In "As You Like It", Rosalind and Orlando, the noble lovers, are balanced off by Touchstone and Audrey, the comic relief.  In "The Magic Flute", the noble lovers Tamino and Pamina are balanced by Papageno and Papagena.  In Anthony Trollope's "Can You Forgive Her?" there's a series of triangles:  in the noble group, Plantagenet Palliser and Burgo Fitzgerald vie for Lady Glencora (PP's wife), in the middle-class group, George Vavasor and John Gray vie for Alice Vavasor, and in the lower-class group, Captain Bellfield and Squire Cheesacre vie for the Widow Greenow, and the latter three (the most hilarious) are straight out of the classic comic commedia dell'arte:  smart woman, miser, and the captain.

Anyway, the characters and plot lines went all the way back to ancient Greek and Roman plays, and were continually updated and remade.  The major characters were:

Harlequin (a/k/a Arlecchino) - in love with and the beloved of Columbine. Originally, Harlequin - and this is what makes him very interesting - was an emissary of the Devil, and was played with a red and black mask and the motley costume that the demon(s) used to wear in the old Medieval Mystery Plays.  An athletic, acrobatic trickster, he was transformed over time into a more romantic figure.  But he remained a magician, and he could either be hilariously clever or diabolically deadly...  Even to Columbine...

Columbine - beautiful, witty, often the wife of Pierrot (Pagliacci), but always in love with Harlequin, and always the smartest person in the room.  She was usually the only person seen on stage without a mask or clown make-up.

Pierrot (a/k/a Pagliacci) - a clown who somehow got Columbine to marry him. In the 18th century, he (almost) gave up Columbine, because he had his own Pierrette. But Pierrette often died young, leaving Pierrot always, always grieving - the sad clown.

Scaramouche - a clown, but "sly, adroit, and conceited".  Later he became swashbuckling, mainly because of the Rafael Sabantini novel in which a swashbuckling nobleman's bastard hides out (in a plot twist) in a commedia troupe.  BTW, the novel "Scaramouche" opens with the great line:  "He was born with a gift of laughter and a sense that the world was mad." 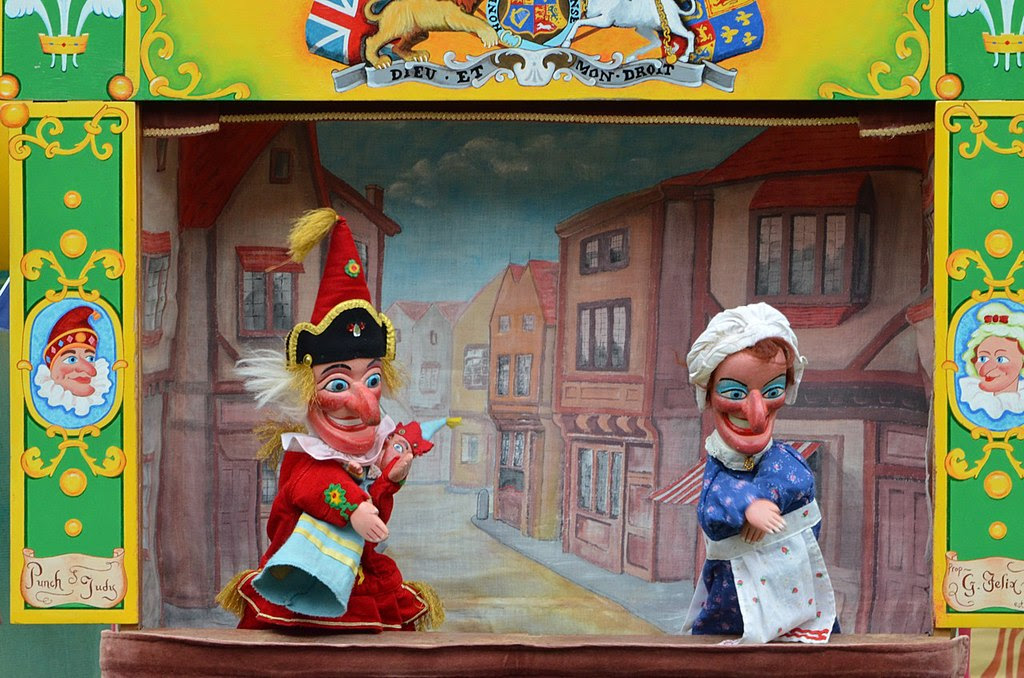 Pulcinella a/k/a Punchinella a/k/a Punch (as in Punch and Judy) - a mean, crafty, hunchbacked clown who pretends to be stupider than he really is.  He is also incredibly violent:  with his "slapstick" (a stick as long as himself), he beats the living crap out of everyone, especially Judy.

As it says in the novel Mrs. Miniver:  "[Punch's] baby yelled and was flung out of the window; Judy scolded and was bludgeoned to death; the beadle, the doctor, and the hangman tried in turn to perform their professional duties and were outrageously thwarted; Punch, cunning, violent and unscrupulous, with no virtues whatever except humour and vitality, came out triumphant in the end. And all the children, their faces upturned in the sun like a bed of pink daisies, laughed and clapped and shouted with delight."  Perfect childhood fun.

Pantalone - An old, ruthless miser who is trying to control everyone and everything.  Probably based on Plautus' "Aulularia" and both are the probable sources of both Ben Jonson's "Volpone", and Moliere's "The Miser."  And let's not forget that almost every bad guy in Dickens is an elderly, solitary miser who tries to control everyone and everything...

Il Capitano - The soldier, who boasts constantly (while being an arrant coward), knows everything, and is always getting into fights he has no real intention of fighting.  Il Capitano is still a major stock character in everything from Dickens (Nathaniel Winkle in the Pickwick Papers), Agatha Christie (think of  Major Palgrave in "A Caribbean Mystery"), E. F. Benson's Major Benjy, Flashman, and Foggy in the long-running comedy, "Last of the Summer Wine".

Actually, as I think about it, these are all stock characters, still used all the time.  You could say that Harlequin today is someone like Jack Reacher, Patrick Jane, Spenser, etc., and Columbine is Emma Peel, Elizabeth Swann, perhaps even Buffy the Vampire Slayer.  Make your own list.  But keep your eyes open:  the cast of the commedia dell'arte shows up in all sorts of times and places.  And where they come...  death often follows.