Yet Another Innocent Abroad

I got back from vacation June 28th and walked straight into the arms of grocery shopping, laundry, mail, e-mail, and jet lag.  It took me a good week to climb out and start getting on top of things again.  We've all read that Americans take less vacation time than anyone else in the industrialized Western world.  Well, I think it's because we all know we're going to have to work twice as hard when we get back to catch up. 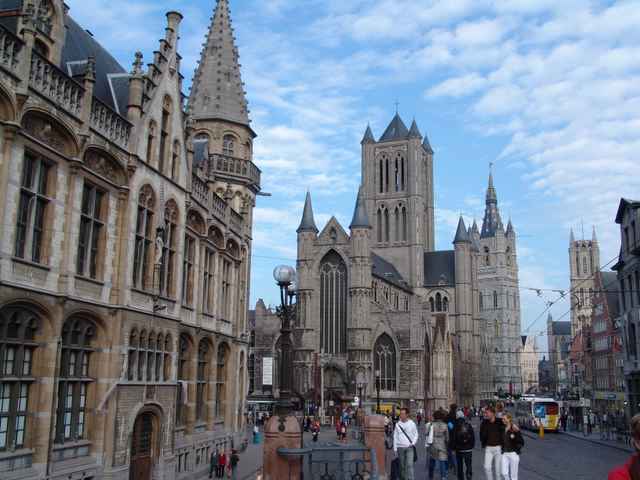 We went on a European cruise, and it was great.  I'm not going to give you all a travelogue, other than the fact that I won

"Stump the Tour Guide!!!"
in Ghent, when I asked where John of Gaunt (medieval pronunciation of "Ghent") was born.  The son of Edward III of England and Philippa of Hainault (medieval Belgium/ Netherlands), John of Gaunt fathered eight children by 2 wives and 1 mistress (Chaucer's sister-in-law, you might remember) who became his wife in old age.  Anyway, the guide had no idea where he was born, but the answer is in the abbey that used to be behind the St. Bavo Cathedral church on the right in the photo.

Actually, it was a John of Gaunt kind of trip:  I also saw the tomb of one of his sons, Cardinal Beaufort, in Winchester Cathedral in England (see photo at right).

Just as exciting, Winchester is where Jane Austen is buried, and I paid my very deep respects to her.  Let us never forget that, at heart, "Emma" is a mystery story, and "Northanger Abbey" is a satire of a Gothic thriller.  Add in the fact that Miss Austen practically invented the romantic comedy, and you have an incredibly versatile author who is still a delight to read.

And read I did:  "Emma" was my traveling companion this vacation, mainly because of something someone, somewhere wrote (and I cannot remember where), that if you really want to know what's going on in this novel, you need to listen to Miss Bates.  I thought I'd double-check.  And they were right.  Tucked into all those garrulous monologues is the absolute truth, rarely found anywhere else.  Everyone else is an unreliable narrator.  Witty, but unreliable.  After a hard day's sightseeing, it was the perfect vacation novel.

All in all, it was a great trip, and my only real moments of horror involved people with smart phones.  At least in the old days, when cameras required expensive film, there were fewer photographers, less photos were taken, and most people bought postcards instead.  (Believe it or not, the postcard and calendar manufacturers can still produce better photographs than the average person with a smart phone.)  Now, everyone has a smart phone, and they cannot put it away for one second, but have to snap 100 shots per minute of anything and everything that is directly in front of them, and don't even think of trying to see around them or asking them to move.

And the selfies!  I now truly realize that, to many people, if they don't have a selfie of it, they weren't there.  Now I know that egomania has never known any bounds, but I still think that selfie sticks should be declared hazardous to everyone's health. For one thing, sooner or later I'm going to wrest one out of someone's hands and start beating them with it.

And, finally, the video games.  We were on a nine-hour bus tour of the Scottish Highlands:

Fabulous.  Beautiful.  I saw deer.  We saw Loch Ness.  We saw Ben Nevis and other "Munro" mountains.  And, in front of me, was a lady who spent the entire 9 hours on her cell phone, playing Tetris.  At one point she wanted to close the bus curtain, so she could see the game better.  Her husband (thank God!) objected, so I didn't have to, and she moved across the aisle, where she continued doggedly with her game.  Whenever we stopped, for photo ops, a little walk, comfort, lunch, etc., she got up and went outside and posed as if she were thrilled to be there - including taking endless selfies! - and then went back to her seat, and back to Tetris.


"The food was better last year."
"I've never told anyone this before."
"It looks smaller in real life."
"I think they're cheaper in ___"
"When's happy hour?"

BTW - Breaking news tells me that Mariia Butina has been indicted and arrested for being an unregistered Russian agent, i.e., a spy.  For those of you who have followed my blogs on South Dakota politics, you may remember that I talked about her in Just Another January in South Dakota.  I'll be talking about her South Dakota speaking tour, and her arrest, and who knows what else in my next blog post on August 2nd!
Posted by Eve Fisher at 00:01 10 comments