This review is not of a crime novel in the normal sense, but a sketch of perhaps the greatest crime in modern history. 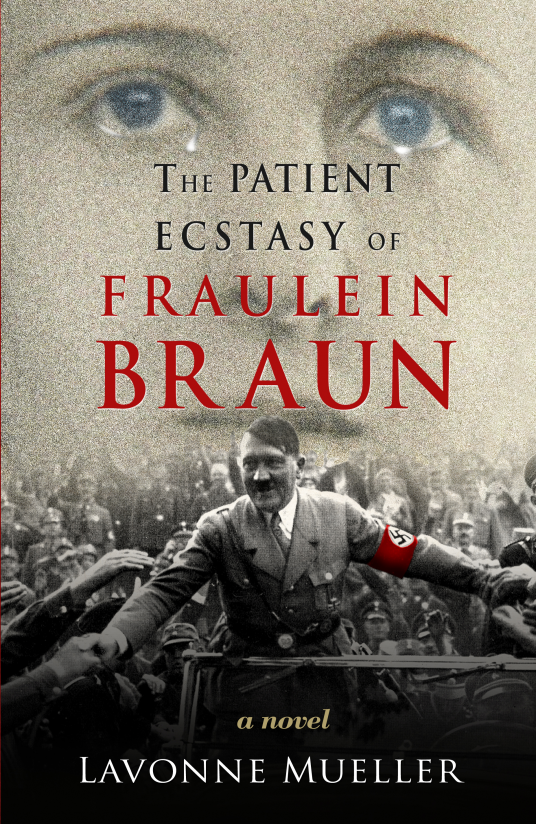 An ARC arrived at a time I was traveling between continents, indeed between hemispheres, but I kept returning to the novel, snatching paragraphs in planes and airports and at odd moments otherwise. These readings were punctuated by looking up facts and figures to track the progress of the novel: i.e, was Gotz Rupp a real figure? Who was Gunnar Eilifsen? And then I needed time to digest the writings.

The Patient Ecstasy of Fraulein Braun is an unusual novel, a rarity in how it worms into the minds of Germans and especially Nazis of the era. A sly encomium, it creates a seemingly naïve but subversive panegyric to Adolf Hitler. Unlike genre novels, suspense is notably absent; virtually no tension arises even though we know the rough outlines of the ending. Albert Speer once said, "Eva Braun will prove a great disappointment to historians," but author Lavonne Mueller begs to differ.

We know Braun primarily from her films and photographs of Hitler, whose intimate relationship wasn't revealed to the public. Braun (through the hand of Lavonne Mueller) discusses 'Adi' in glowing tones of worship, her Juliet to his Romeo. To categorize Eva Braun as a groupie would be to trivialize her because her character exhibits startling whitecaps of profundity in a shallow sea of insipidness. The book offers a convincing peek into a personal side of Hitler, although it's more a dissertation describing those who loved and admired him.

Mueller helps us comprehend the immoral, the insane amidst the then political landscape, how normal became horrific and horror passed as normal, a beastly beauty and rightness seen only by willingly indoctrinated Nazis. At one point Eva asks herself, "Why doesn't the world understand?"

From historical documents culled from the time, we know this isn't an aberration. Consider sources such as a letter Magda Goebbels sent her eldest son, Harald Quandt, shortly before she 'euthanized' her remaining six young children and committed suicide the day after Hitler's: "Our glorious idea is ruined and with it everything beautiful and marvelous that I have known in my life."

Now you begin to sense the underpinnings of the novel. Nazism encapsulated a peculiarly twisted view where those not of the Aryan ideal were exploited and then destroyed. Jews were dehumanized until they were less than livestock, where they'd become 'bacteria' to be eradicated. A good German might feel angst at the loss of a prized housekeeper or craftsman, not of the loss of human beings.

Intellectuals and protesters like the White Rose were 'patriotically executed' for the betterment of the German state, which had become synonymous with the Nazi Party. The concept of 'blood guilt' gave sanction to wipe out the families of those considered traitors.

The Party had become not only the government, but the religion. Thus developed a disconnect between good and perceived good, between evil and perceived evil, a topsy-turvy madness where wicked was wonderful. The killing aped John Ruskin to the extreme, that war is peace and death is artful.

In this story, Braun becomes emblematic of the German citizen, a token, an exemplar of Germanic thought condensed in one woman. She strives to humanize the inhuman, helping us understand what enamored the German nation. Whatever the country felt precipitated in her, distilled and refined. Hitler wasn't merely her hero, he was her god. In Him (her caps), all things were beautiful and perfect, a being who could do no wrong. Naziism exemplified beauty, all else was tainted.

Other than a brief 'banana drama' and a strong bent toward submission, the casual reader will find no lingering scenes that dawdle over exploration of sexual feelings and body parts. Braun's baring of her breasts comes off as clinical, a self-serving shadow of a gesture in the midst of war. Here Mueller merges Naziism and the horrors of battle with Hitler's prim and stunted sexuality, not that Braun has the least doubt her paramour is the most perfect male, the most virile potentate on the planet.

The historical accuracy is impressive, if sometimes overly detailed down to minute observations such as street numbers. I compared a few of Mueller's events against the known timeline and variance, if any, appears so slight as to be negligible. The author's research gives us virtually a history with an overlay of imagined personalities and conversations, a way to make the reader comprehend the incomprehensible.

Therein lies the power of the book, indeed what fiction should do but rarely accomplishes. Most historians say events cannot be grasped without submersing oneself in the mood and period. This text helps us understand what cannot be understood, not Hitler himself, but his admirers and the mad sense of the day.

Read at Your Own Risk

And that makes the book frightening, because we begin to realize the possibility history could repeat itself. Therein lies the suspense I considered missing from the novel. Suspense hides the horror that writhes barely buried beneath the skin waiting to erupt again upon an unsuspecting world.
Posted by Leigh Lundin at 00:00 13 comments