Early Clues That I Might Become a Crime Writer

Since we’ve been on fire watch this past week when I’d normally be writing my post I’ve been a little scattered, so I hope you don’t mind a not-so-instant replay (hey, the networks do it over the holidays) of something I did somewhere else some time back. I’m sorry for not having a totally fresh post today, but most of you probably haven’t seen it.

One of the fires was fairly close to us and when it crested the mountain to our side, well, it was a little hairy. Amy left work early and stayed home a couple days just in case we had to evacuate. And, besides the big fires, another one did break out in a barn near us. Luckily they got that out before it spread. But it’s always a little nerve-wracking when the Santa Anas are blowing. Raymond Chandler famously said of those devil winds in Red Wind:

“There was a desert wind blowing that night. It was one of those hot dry Santa Anas that come down through the mountain passes and curl your hair and make your nerves jump and your skin itch. On nights like that every booze party ends in a fight. Meek little wives feel the edge of the carving knife and study their husbands' necks. Anything can happen. You can even get a full glass of beer at a cocktail lounge.”

And because I won’t be posting here again until after the New Year, I want to wish everyone Happy Holidays and a Terrific New Year. And thanks to Rob and Leigh, and the board, for hosting us here, and to all the SleuthSayers and everyone who’s come by to say hi and check things out.

So, here goes. Early warning signs that I would go down this wayward path:

Well, aside from the seven banks I robbed and my days as a benevolent hitman, sure, there were signs I might become a crime writer. But I was disappointed never to make it onto the FBI’s Top Ten.

And while the romance of being an outlaw is tempting, I think my temperament is better suited to that of “crime fighter” and crime writer. And not just because they rhyme.

I have a bit of a different take on how I came to be a crime writer. I was influenced by film noir and crime movies and later by the great writers from Hammett and Chandler on up. But because of certain things in my checkered past I think I’ve always had a strong sense of justice. And, while not getting involved in marches or crusades, I’ve tried in my own way to bring a little justice to this world on a micro level.

Someone who knew me well told me a long time ago that he thought I was like Don Quixote tilting at windmills. I don’t think he meant it as a compliment, but I’ll take it as one. As I tell my wife, who would rather avoid confrontation than fight, sometimes you win, sometimes you lose, but at least you have to stand up for yourself or others. And I don’t do this as much anymore. I guess I’ve mellowed with age and the sage advice of my wife. And also knowing that I can’t fight every battle.

At some point, I figured out one way that I could make justice prevail was to write about it. I think the below stories illustrate what I mean when I say I think I was born to be a crime fighter-writer.

Everything below has been abbreviated and abridged. Names changed to protect the innocent and guilty. 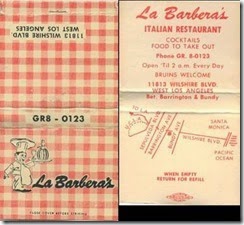 Many years ago (decades), my mother, grandmother and two brothers and I went to La Barbera’s (sadly no longer there) on Wilshire for dinner. Dad was out of town. We were seated in a booth. My youngest brother and me on one side of the booth. Mother, grandmother and middle brother on the other. The younger one was, well, young, squirming a little in the seat. The man in the next booth could feel him squirm through the seatbacks. He turned around and started yelling at my brother. Yelling and nasty! He finally turned around back to his companion. I didn’t like what he’d done so I started to mimic everything he said so he could hear it. I also started jamming my elbow into the back of the seat, so he could feel it on his side—yeah, I’m a little nuts, or used to be.

So he turned around, started yelling at my brother again. I said “I did it.” He didn’t respond, just turned away. But I couldn’t stop mimicking him. Well, to make a long story short, after some more back and forth, he ended up at our booth—pulling a knife on me. I had long hair and at that time it wasn’t cool with some people. And I thought everyone in the restaurant would de facto be on his side, especially the UCLA jocks sitting nearby on one side and a Marine in dress blues on another. But the jocks were on my side. One stood up and said, “I saw it, the guy pulled a knife on him [me].” And the Marine kept to himself. Eventually, we were moved to another side of the restaurant. Our original waitress came over to us, put her hand on my shoulder and thanked me for putting the guy in his place since he lived near the restaurant and came in every week with his sister causing trouble. But they couldn’t say anything since he was a customer. A couple other waitresses did the same. That made me feel good. But my mom and grandmother almost had heart attacks...

Once again out to eat. With grandmother again and whole immediate family this time, dad included. Man in the next booth was yelling at his kid. Nasty. Deriding him for everything. Humiliating. Young kid, maybe around 5, 6, 7. As I say, because of my background things like this get my back up. “Why don’t you leave him alone?” I said. Uh oh! Paul’s at it again, the family thinks. Tell me to shut up. Nobody pulled a knife this time and the man’s wife finally got him to shut up. But I couldn’t help myself. And when it was over, nobody at my table said anything to me for some time. I guess they thought here goes crazy Paul again.

A friend of mine and I were in Westwood which, at the time was a hub of activity. Crowded sidewalks. Lots of street traffic. A bus pulled up to a bus stop. An old man was running for it—“running” as best as he could. The bus driver saw him but didn’t wait. I was pissed. So I ran down to the next bus stop a block or two away, beating the bus by seconds—he was in traffic. When the driver opened the door I said “Why didn’t you wait for that old man?” The driver told me to “&#%*#@$ off” and drove off. I didn’t win that one, but maybe the next time the driver saw an old man running for his bus he would wait for him. Nah, not that guy. —And, of course, I’m abbreviating our conversation, but that’s what it amounted to.

* * *
I was living in a four unit apartment building in West LA, a good neighborhood. Three downstairs units, one upstairs unit. I lived in the upstairs unit and had a view of the front door to the middle apartment downstairs from the top of the outdoor stairs. The woman who lived there had been attacked by a guy who tried to rape her. Her face was black and blue from the first attack.

The first time it happened, I was in my apartment (the only upstairs unit in a four unit building) and heard yelling and screaming. I went outside. Sally’s (name changed) boyfriend said something about her being attacked and the guy was in the alley. Her boyfriend and I chased him down the alley. The police came out in force, including choppers that lit up the alley like daylight. But they didn’t’ catch the guy.

Every night after the first I would search her apartment for her when she came home from work, if her boyfriend wasn’t there. I'd let her sleep on my couch. And then she started staying at her boyfriend’s place off and on, so I asked her to let me know if the cops were going to stake out her apartment. She said she would. 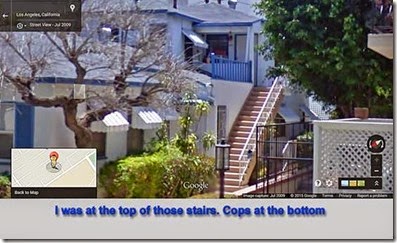 Then, one night I’m watching “In a Lonely Place” on the tube (one of my favorite movies) when I heard helicopter noises. I grabbed my politically incorrect pistol, headed to my front door. I opened the door slowly and headed out to the landing at the top of my stairs. I watched a chopper circle above. Then, two scuzzballs came out of Sally's apartment at the bottom of the stairs. Greasy long hair. Big mustaches. Dirty clothes. The bad guy and a friend?

This was one of those situations where you don't have time to think. You have to act.

"Hold it," I said, aiming near-point blank at them only a few yards below. I could have dropped them both before they had a chance to turn around. "Turn around, slowly."

They did as ordered. Turned s-l-o-w-l-y.

"We're the police," the scuzzier of the two said. "Put the gun away and go inside."

I asked for ID and he badged me, cautiously. That was good enough for me. I went inside. So much for a trigger happy LAPD, though I wouldn’t try this today. It’s a whole different world.

Back in my apartment, “In a Lonely Place” was still on. And then the reality hit. Jesus, they were cops. And I had pulled a gun on them. The movie droned in the background. It could have been anything as far as I was concerned. I was freaking out. Visions of SWAT teams surrounding my apartment flashed through my mind.

The thoughts grew larger. What should I do? Sally hadn’t told me the police were staking out her place, as she’d promised. Now I’d pulled a gun on two cops. I called her apartment. One of the cops answered.

"Are you the guy from upstairs with the gun?" he said.

"Man, you really made me nervous."

Not as nervous as I was when I found out you were the cops, I thought, but didn't say. He was cool. They weren't going to bust me. I had, indeed, pulled a gun on the LAPD and lived to tell about it.
Sally moved out not too long after that. And, shortly after that the Westside Rapist was caught a block away. Not sure if it was the same guy who attacked Sally, but I tend to think it was. 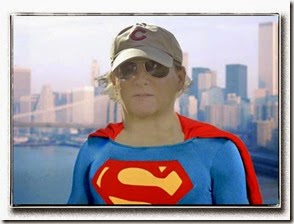 So there you have it. My crazy adventures seeking truth, justice and the American Way...and there’s more. But I guess that’s for another time. So when I started writing I naturally gravitated towards telling stories where the bad guys would get punished. What better genre to do that than crime writing. Of course, sometimes, especially in the noir genre, the bad guys don’t get caught, but then there is always the great hand of fate that I can bring down on them as I sit at my computer screen in my captain’s chair and steer my boat to exact revenge and justice in the world. …Okay, so I’m a little over the top but you get the idea.

I don’t do this much anymore – after all, someone might pull a gun on me. And I don’t think the bullets would bounce off my chest.