Man Without a Star


by David Edgerley Gates
Kirk Douglas. He wasn't the easiest guy to work with, by all reports. He was driven, and not a little of that leaks into his performances. His acting was muscular - not in the sense of beefcake, but the physicality, his center of gravity, the weight. And the restlessness, an inner engine, a furnace. Anger, certainly. He was trapped by it. If one thing defines Douglas, as a presence, it's that he seethed. He gave off heat like molten glass. 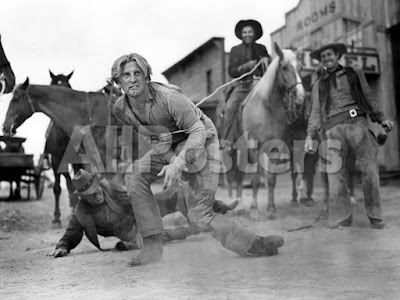 Like anybody else, he made his share of stinkers, but in the main, he brought something to all of his pictures. Most of them are solid, some are extraordinary. Once or twice he played a real skunk, Ace in the Hole, The Bad and the Beautiful. More typically, a guy who was fatally flawed, In Harm's Way, Gunfight at the OK Corral, The Arrangement; most famously, van Gogh in Lust for Life. Occasionally, he actually got to be the good guy, Last Train from Gun Hill, and Seven Days in May, notably Spartacus, but by and large, his characters are ambiguous. 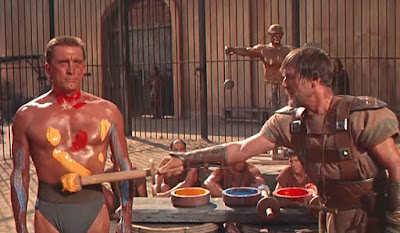 He made Man Without a Star in 1955. In brief, it doesn't sound like much. A drifter wanders into a range war, and sides with the little guys, even though he hates barbed wire and what it represents, the end of the Old West, getting crowded in by rules and fences. You've ridden this trail before. Excuse me, no. 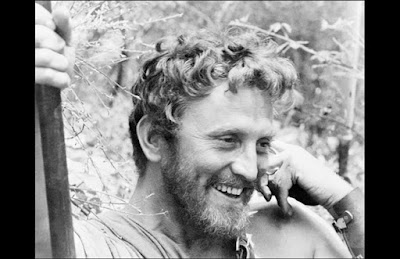 The big reveal, when Douglas tears his shirt open to show his scars - roped up in the hated wire, and dragged - isn't simply physical. It's bottled-up psychic fury. This is Douglas balanced on the edge of psychosis, the buried past, the unforgiven injury, the animating event. Nobody is better at this, Like his Holocaust survivor in The Juggler, a much underappreciated movie, this is a guy who isn't simply bruised, but in torment. The thing about both pictures is that they're about redemption. The characters Douglas plays haven't always gotten a second chance. And the other theme in Man Without a Star is the promise of the distant horizon, of escape and reinvention. 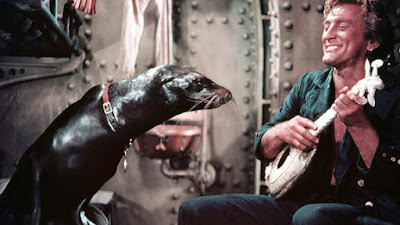 There's a darker alternative, of trying to find rescue in flight, and when Douglas to all intents and purposes remade Man Without a Star in 1962, Lonely Are the Brave was 'heroic' on a more intimate canvas, black-and-white, composed in shadows. It was tragedy, absolutely and utterly formal. Douglas exec produced, and this darkness was no accident. He later said it was his favorite among his pictures.

He hired Dalton Trumbo to write the screenplay for Spartacus. (The novelist Howard Fast, who'd written the book, was himself a former Communist, turned apostate.) They had issues with the script. Trumbo wanted it to reflect the contemporary Red Scare. Douglas wanted it to be more universal. It was a message picture, yes, but not a sermon. Douglas fired his original director, Anthony Mann, and got Stanley Kubrick on board, his guy from Paths of Glory. Maybe he thought Kubrick was more likely to tug his forelock.

Didn't happen. Toward the end of the shoot, they had a conversation about how to credit the screenplay. Trumbo was blacklisted, the kiss of death. Kubrick suggested he himself take script credit. Douglas said fuck it, let's give it to Dalton and take the heat.  Heat they got. Hedda Hopper and Louella Parsons did columns telling moviegoers to boycott such a Commie picture, but Spartacus ran the table at the box office. Otto Preminger followed suit with an on-screen credit for Trumbo, with Exodus.

It was the beginning of the end, no question. It was about money, of course. The blacklist was bad for business.

Kirk Douglas had an unquiet heart. A guy with a chip on his shoulder. He was a romantic, how not? And just below the surface, some deep and unknowable sorrow. He may never have made peace with himself, but now he rests. 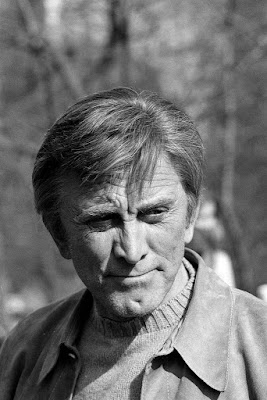 Email ThisBlogThis!Share to TwitterShare to FacebookShare to Pinterest
Links to this post
Labels: Dalton Trumbo, David Edgerley Gates, Kirk Douglas, Lonely Are the Brave, the blacklist 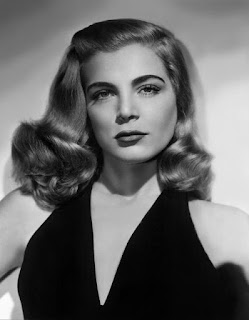 Recently at SleuthSayers I did a post ( http://www.sleuthsayers.org/2016/07/a-noir-summer.html ) suggesting some lesser-known movies for a noir summer. Two of those movies, Too Late for Tears and The Strange Love of Martha Ivers starred Emma Matzo…better known as smoky-voiced Lizabeth Scott. Doing that post made me think I should do a post on Scott. And even though she only has about 30 film and TV credits, she is one of the Queens of noir.

Her noir canon consists mainly of these movies:

Dead Reckoning: one of my favorite noirs. In fact, several of her noirs fall on my fave list. Along with Dead Reckoning are Pitfall, Too Late for Tears, The Strange Love of Martha Ivers. All good. Some people find Dead Reckoning a rather pedestrian noir, but for me it’s got everything a noir needs. Humphrey Bogart and his buddy are soldiers heading to DC so his buddy can be awarded the Medal of Honor. For some reason, the buddy doesn’t want to be the center of attention and takes a powder, leaving Bogart to try to figure out what happened. He ends up in Gulf City. Enter femme fatale Coral Chandler (Scott): noir ensues. 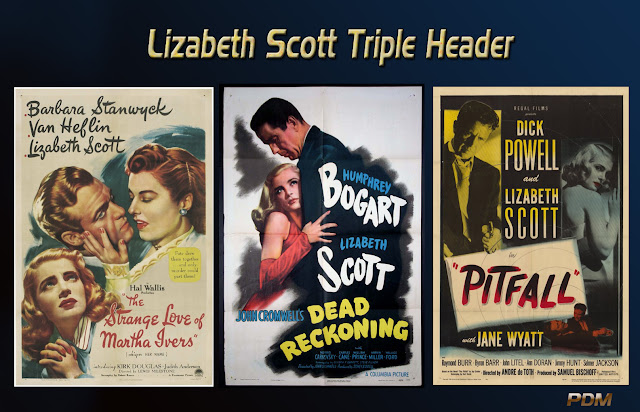 Pitfall: Dick Powell continues his escape from juvenile leads (actually he’s long away by now) as an insurance exec and family man married to Jane Wyatt (Margaret Anderson on Father Knows Best, so you know she’s a wholesome wife and mom, even though the movie came first). Checking out a case and working with slimy P.I. Raymond Burr, Powell meets femme fatale Scott. Noir ensues. 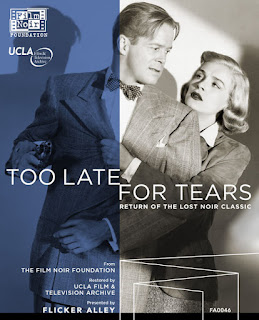 Too Late for Tears: As I’ve said, this is one of my favorite noirs, period. Scott’s so evil in this one that even Dan Duryea, who’s pretty good at being rotten himself, can’t take her. A husband (Arthur Kennedy) and wife (Scott) are driving their convertible when someone in another car throws a suitcase full of cash into their car. She wants to keep it, he not so much. Noir ensues. Good, low budget noir. I like this one a lot. Some nice LA locations. It was written by Roy Huggins, who later created The Rockford Files and The Fugitive (TV series), though David Goodis might dispute that. And it’s just recently come out in a new, fancy-dancy restored Blu-ray/DVD edition.

Strange Love of Martha Ivers, The: Scott’s first noir and only her second movie. In this one she’s not the femme fatale, but she’s getting her noir footing down. Van Heflin winds up in his hometown, now run by his childhood sweetheart, Barbara Stanwyck, and her D.A. husband (Kirk Douglas in his first movie). Scott and Heflin have a thing for each other, but Stanwyck has other ideas. You know what happens next: noir ensues.

I Walk Alone: Frankie (Burt Lancaster) gets out of prison, expecting to go back to his old life of crime and high times with Kirk Douglas and Wendell Corey. But Kirk has other plans for his old pal. Things just ain’t the same for Frankie after fourteen years in prison, even if he did take the rap for Kirk. Enter Kay Lawrence (Scott) who’s been told by Douglas to find out what it is Frankie really wants. Guess what: noir ensues. 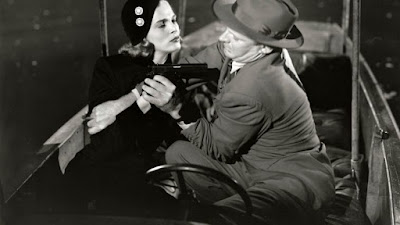 Becoming a Queen of Noir is a long way from Scott’s seminary upbringing in Scranton, PA. And her life wasn’t without controversy. She had an on again off again relationship with her boss and mentor Hal Wallis, one of the major producers of all time. It was rumored in a 1954 Confidential Magazine article that she was a lesbian and that her name was found in the Rolodex of a notorious Los Angeles madam. Some claim her career was ended by the scandal.

According to the New York Times: “Ms. Scott sued for $2.5 million, contending that the magazine had portrayed her in a “vicious, slanderous and indecent” manner. The outcome was never made public, but the suit, filed in 1955, was believed to have been settled out of court for an undisclosed sum. The scandal, however, was nearly ruinous.” You can find the full article here:   http://www.nytimes.com/2015/02/07/movies/lizabeth-scott-film-noir-siren-dies-at-92.html?_r=0

I don’t think it was ever really proven one way or another, and it certainly doesn’t matter to us today, but at that time it was a big deal and probably one of the reasons her career slowed down. Whatever the truth was, she was an independent woman who didn’t give in to the pressures to put on an act or be something that Hollywood wanted her to be.

She never married and lived alone in the Hollywood Hills until her death on January 31, 2015 at the age of 92. Lizabeth Scott left a legacy of several great noir films and is definitely one of the Queens of Noir. 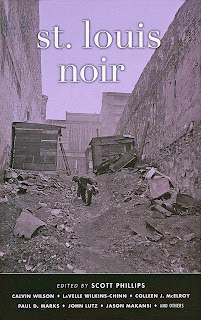