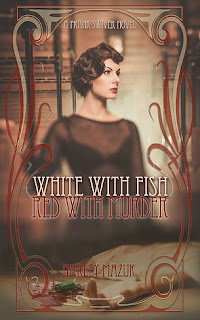 It's my great pleasure to welcome to SleuthSayers today Harley Mazuk, a good friend and fine short story writer who's making his debut as a novelist at the end of February with White with Fish, Red with Murder. I've been a big fan of Harley's work since his first appearance in Ellery Queen's Mystery Magazine back in January 2011—his first publication period—with the story "The Tall Blonde with the Hot Boiler," featuring PI Frank Swiver. Swiver became a series character with other EQMM stories and is the protagonist of the new novel as well—a great character springing from Harley's own love for and keen attention to the history of detective fiction.

I asked Harley to give us a glimpse at the genesis for his debut novel and at the origins of the character himself. I'll turn it over to him here—along with a recommendation to check out the book itself, due February 28.

“Write what you like” is common advice to beginning writers. When I realized that I had read all of Raymond Chandler’s novels, and most of his short stories, that I’d finished the Dashiell Hammett canon too, I was at a loss for what to read next. I decided to write the next private eye tale that I’d like to read.

I’m not deluded enough to think I could keep up with Phillip Marlowe or Sam Spade. I didn’t want to write fan fiction either, but rather, something new, hopefully original, in the mode of Chandler, in the style of Hammett, a continuation of the work of these masters. I created a new private eye, Frank Swiver, a wino and a womanizer, and I set out to write stories inspired by pulp fiction, the Black Mask tradition.

I never intended to mimic Chandler’s style, with his wonderful over-the-top similes. To do so would be a sucker’s game, or a bad parody. I wanted to think like Chandler, but write like Harley. (This required copious applications of alcohol.) I wanted to create something of my own yet something that would curl into the reader’s subconscious and feel vaguely familiar.

I read The Notebooks of Raymond Chandler, a dandy little book with “Twelve Notes on the Mystery Story,” not to mention the addenda of 13 more including the pearl of wisdom: “The most effective way to conceal a simple mystery is behind another mystery. Make the reader solve the wrong problem.”

I bought a volume of Chandler’s letters, and learned he was rather an opinionated gent. And I read in “The Simple Art of Murder” of his admiration for Dashiell Hammett.

That took me to Hammett’s Moral Vision by Rhino Thompson. I added Hammett’s “24 Commandments” to Chandler’s “Twelve Notes,” (plus addenda). And I learned from an essay by Steven Marcus in The Continental Op that the P.I.’s job, when called out on a case, is to investigate the “reality” that anyone involved in the case will swear to, to deconstruct that account and construct a “reality” of his own, (a true fiction) of what really happened.

What does the writer learn from Hammett? First, keep the prose simple. Use straightforward declarative sentences, like Hemingway might. Second, write in a voice like a private dick typing up his reports for the boss—give meticulous, objective descriptions of suspects, clothing, settings. Third, there’s value in setting your stories in situations where social institutions have broken down. And I added Hammett-like elements to my stories, such as troubled or unconventional romantic relationships, humor—preferably dry, understated wit—and a working class protagonist.

I learned to incorporate the tropes of pulp fiction I enjoy. What’s a novel without a curvy femme fatale with gorgeous gams and straight seams on her stockings? Throw in tough guys, a double cross, gunplay, murder, colorful slang, a sap to the back of the head, a crushed fedora, nefarious schemes, and . . . another double cross.

Where do I stray from the boundaries laid out by Chandler and Hammett? Well, Frank’s not a white knight like Marlowe. He’s a bit more noir-ish in that he’s lost and lonely, driven by lust as much as anything. But Frank Swiver has a moral code; it’s just not Marlowe’s moral code. Frank is non-violent, an observant (though straying) Roman Catholic, and a conscientious objector during times of military conscription. Can a pacifist make the grade as a P.I? After all, being a private dick can be a rough trade. Well, it has been a bit constraining in the types of cases Frank can take and the situations I can put him in—for instance, I don’t want to depend on a deus ex machina with a gun to burst in and save Frank. But so far (after two novels and seven or eight shorter works) putting Frank in jams and extricating him non-violently has been challenging and fun.

The other influence on Frank Swiver has been Ian Fleming’s James Bond. I chose Bond because of his totally inappropriate over-the-top drinking—a 2013 study of Fleming’s novels revealed that Bond averaged 92 drinks per week—and his ability to go into action thoroughly toasted. I also like Bond’s eye for the women, and his zest for sex, an angle I want in my stories, even if Marlowe was a bit puritanical in such matters.

P.I. Frank Swiver, of the Old Vine Detective Agency on Post Street in mid-20th century San Francisco, has turned into my “series” character. I’ve had a lot of luck with him. Ellery Queen Mystery Magazine bought my first professional effort—“The Tall Blonde with the Hot Boiler”—in 2010 and put it in their “Black Mask” section. See? If they put it in Black Mask, I must be doing something right, attaining that pulp feel I want. And though it was a long slog, through agents and finally non-agented submissions, Driven Press bought my first novel—White with Fish, Red with Murder. After a long incubation process, my book is finally coming out this month. So if you’ve been waiting for the next installment in the glorious tradition of classic P.I. novels, Frank Swiver may be the shamus for you.