A Pair of Kings 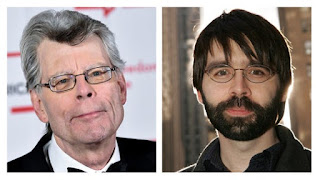 For many years, one of my favorite writers has been Stephen King. I started with The Stand, which I still consider to be his best novel (next best: 11/22/63), and recently finished his latest, The Institute. Looking up now at my shelves, I count 71 of his books, including a couple that are nonfiction and several that are collaborations. I liked 'em all.

Even though he's prolific, to say the least, King still can't write novels and stories fast enough to suit me, so imagine how pleased I was to learn, several years ago, that his son Joe--pen name Joe Hill--was cranking out fiction as well. I also own all of Hill's books (my favorite: The Fireman), and a few days ago I finished reading his latest, a collection of short stories called Full Throttle.

I won't try to summarize every story in this collection, but I'll mention some that stood out, for me: 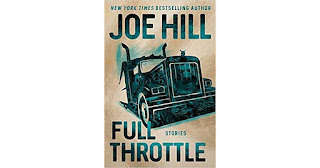 "All I Care About Is You" -- A story about the future, and about relationships between humans and machines. I think this is one of the two best stories in the book, and one of several that brought tears to my eyes. Science fiction at its finest.

"Throttle" -- A plot that Hill says was inspired by Richard Matheson's short story "Duel" (and its screen adaptation), this is a story about a group of bikers who are targeted and terrorized by a monster truck and its faceless driver. One of two stories in this book co-written with Stephen King.

"Late Returns" -- In this story a librarian takes a job driving an antique Bookmobile, and finds that some of the customers who visit him on his route have been dead for fifty years or more. An emotional and satisfying story, otherworldly but not horrific.

"Faun" -- Another tale inspired by a late author and one of his masterpieces--in this case Ray Bradbury and his short story "A Sound of Thunder." Here, a team of big-game hunters travels through a magical door in a New England farmhouse to a fantasy-world forest of orcs and fauns and centaurs.

"In the Tall Grass" -- One of the scariest and weirdest of the stories featured here. A young man and woman driving across the country make an unscheduled stop in rural Kansas when they hear a child's voice calling to them from a field of eight-foot-tall grass beside the road. The good Samaritans enter the tall grass to try to find him and find unspeakable horror instead. I didn't like this quite as much as I figured I would, but it's still good, and I thought it was better than the Netflix Original adaptation I watched the other night.

"By the Silver Water of Lake Champlain" -- To me, the best story in the book. The plot involves two  children who discover the dead body of a Nellie-like dinosaur at the water's edge, and what happens afterward. A fantastic short story, soon to be an episode of the streaming series Creepshow. 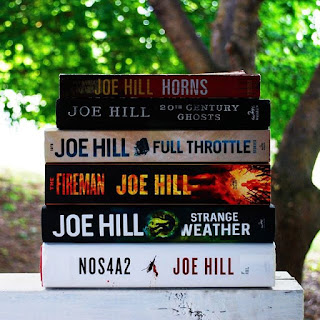 Have any of you read Full Throttle yet? If so, what did you think? Has anyone read Joe Hill?

I'm already looking forward to his next book.