June is the month of brides and I've just returned from a wedding.  As I've grown older I have found that I attend more funerals than weddings...which I deeply regret.  Weddings are one of the last bastions of open bars and bad dancing, and for people like me that spells fun.  Most people like weddings, I think.  It's one of the few ceremonies left that both attendees and participants mutually enjoy.  It's an optimistic occasion in every culture and faith; full of youth and exuberance, hopes and expectations.  And people look better at weddings--there are pretty girls dressed very prettily and men in tuxedos and suits.  Have you noticed that almost every man is improved by a tux?  The seventies may have provided the exception to this rule.  I understand the bridesmaids gowns are usually cringe-inducing, however, the selfless manner in which the chosen few submit to them is very charming and brave.  I mostly come away feeling better about people and favorably impressed with the rising generation.  The open bar may play some small part in these perceptions.

Not all weddings proceed in the effortless, swan-like, manner hoped for by the bride's proud parents.  Usually this occurs during the reception, and sometimes in spectacular fashion.  I have never attended one of these wedding train wrecks as a guest, but I have been involved with one or two professionally as a police officer.  It's very uncomfortable, and in one instance, tragic.

As there are always the exceptions to the rule, so it is with my mention that people are mostly happy at weddings.  Some are not.  On such occasions the open bar tends to be a bad idea discovered too late.  Passions run high at wedding receptions, and they are not always amorous ones.  And once the libations begin to flow, speaking one's mind to total strangers feels almost compulsory.  Sadly, these strangers are often related to the shortly-to-be-unhappy couple whom the critic has decided to publicly indict, or offer unsavory, and inappropriate, commentary on.  Bad dancing is quickly replaced with equally poor, but vigorous, fighting skills.  These martial displays appeal mightily to the young testosterone-charged, and well-lubricated young men in attendance, tux or nay, who quickly choose sides and join the fray.  Police are called by management.  The expensive nuptials become just another Saturday night at bar break. 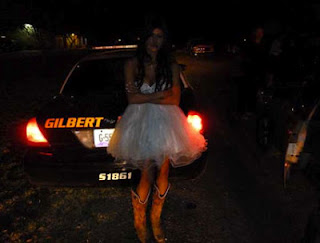 It does happen.  I've responded to such a call and can attest.  It makes a good story for the grandchildren someday...perhaps.  The bride's mother  is never the same, I think.

On one occasion, officers of my department had to return several times to the hotel where the reception was held to put down flare-ups.  These went on well after the reception and raged from room-to-room into the wee hours of the morning.  It was something of a Hatfield-McCoy wedding though everyone did go home at the end of it all.

This was not the case during one reception.  In this instance, it was held at a seaside hotel during the autumn and all was going well until one of the bridesmaids husband decided to go swimming.  The day before had been very stormy and the ocean was still churning when he rushed onto the beach, stripped out of his shoes and shirt, and dove in.  This was after the season and no lifeguards manned the beach.  He was last seen swimming due east--directly out to sea.  When I arrived the wife was hysterical and screaming for me to send my officers into the water after him.  One of my men volunteered, but when I took in the condition of the sea and learned that the last time he had been seen with any assurance had been twenty minutes prior, I said no.  This was very hard to do, but I couldn't risk another man's life under the circumstances.  Naturally, I did activate the Coast Guard and fire department, which also had some boats available.  It was a fruitless search that went on until dark.  I found him the next night having washed up with the tide.  I was grateful that he was unmarked.  The sea can do truly terrible work on those it claims.  It was a small mercy for the wife and family.

Weddings would seem to be a good setting for a mystery story, but I'm not aware of very many.  Perhaps I've just not come across them.  My education is sometimes spotty.  Certainly there are the requisite ingredients available: passion, drink, love, sexual tension, and that certain, "I can't be held responsible for my behavior" attitude amongst many attendees.  Additionally, as the receptions often involve hotels and overnight stays, further intrigue is possible throughout the long night.  I might try writing one someday.

In spite of my "on-duty" experiences, I still like weddings very much.  They make me feel younger and more hopeful.  As for honeymoons, well, that's another story, isn't it?  You don't get invited along on those very often.  But crime, violence, and tragedy, stalk them as well if the news is to be believed--husbands vanish from cruise liners; wives go diving with their husbands and don't come back up.  It would seem the institution of marriage is fraught with peril from proposal to final parting.  Perhaps this explains the falling marriage rate.

Whether it does, or doesn't, it certainly provides potential grist for the literary mill and food for dark thought--devil's food wedding cake perhaps.