by John Floyd
Those who know me know I like to write--and read--mostly mystery stories. As for the writing part, my "genre specialty" is made easier because almost any story involving a crime can be considered a mystery.

Today, though, I want to tell you about two pieces of fiction that I recently discovered from other genres, and they're stories that I found exceptional. One's a western and one's science fiction, but both are chock full of crime and deception; does that mean they could be loosely defined as mysteries? Probably not. But I liked 'em anyway.

The first is a Netflix Orginal series called Godless. And I need to clarify that a bit. A lot of TV shows that I've watched lately, like Goliath, True Detective, Fargo, etc. (and unlike Longmire, Game of Thrones, Stranger Things, House of Cards, and most others), have been what's become known as "limited-series" presentations--stories that are told start-to-finish in one season. There might be some degree of similarity and continuity between seasons, but mostly the story ends when the season ends, and you wind up with what amounts to a single seven-to-ten-hour, full-character-arc movie. I usually binge-watch them. 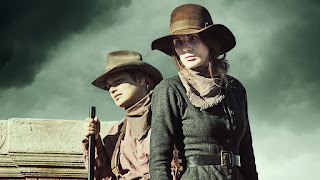 Godless is a western, and one of the best I've seen. It features a few familiar faces like Jeff Daniels and Sam Waterston and a bunch of lesser-known actors that have become better known as a result of their being cast here. The story involves a legendary outlaw in pursuit of a former friend who betrayed him, but the strangest thing about the show is that it takes place in the fictional La Belle, New Mexico, which is a town of mostly women--all the men have been killed in a catastrophic mining accident. I won't get into too many details here, but this seven-episode series is truly well done, in every way. The writing, the acting, the direction, the cinematography, everything just works. By the way, any of you who might still think of Jeff Daniels in Dumb and Dumber or Michelle Dockery in Downton Abbey will barely recognize them here. Daniels is as good in this as he was in the HBO series The Newsroom, and that's saying a lot.

My other recent discovery was a novel called Artemis, by Andy Weir (who also write The Martian). I loved The Martian--book and movie--and I thought this second novel was just as good. The protagonist, a young woman named Jasmine (Jazz) Bashara, is as tough and resourceful as any hero/heroine I've seen in a long time, and outrageous as well. At the start of the book Jazz is a wannabe tour-guide for some of the attractions around Artemis, the first and only city on the moon, and since she can't seem to pass the test to become a guide she makes a living smuggling certain items when they arrive from Earth to her customers here in space. Long story short, because of her lack of funds and need for employment she finds herself a part of a get-rich-quick scheme that instead gets her into deep trouble, including dealing with hitmen who are sent from Earth sort of like the four gunmen in High Noon. You'll wind up cheering her on, while you learn (or at least I did) a lot about life on the Final Frontier. 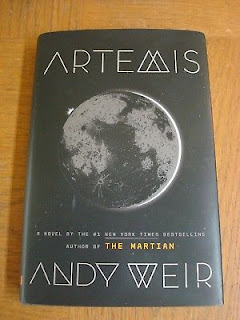 That's my sermon for today. And don't get me wrong, I've watched a lot of other good movies lately--Wind River, Baby Driver, Arrival, Logan Lucky, Gerald's Game, Hell or High Water, No Escape, Wonder Woman, Bushwick, Mudbound, The Last Jedi, Get Out, Blackway, Bullet Head, Three Billboards Outside Ebbing Missouri--and I've read some other good novels too--The Cuban Affair, The Fireman, The Girl from Venice, Dragon Teeth, Home, Gwendy's Button Box, World Gone By, Blackjack, Mississippi Blood, Sleeping Beauties, Goldeline, Fierce Kingdom, El Paso, The Midnight Line, Paradise Sky, The Big Finish, A Column of Fire, etc.--but I believe these two stories were as good as any of them, and better than most. If any of you have seen Godless, or read Artemis, please pass along your thoughts.

I also wouldn't mind some recommendations. I've been devouring collections of short stories lately, mainly those by Bill Pronzini, Charles Beaumont, Ray Bradbury, John Cheever, Richard Matheson, Fredric Brown, Annie Proulx, and (believe it or not) Tom Hanks. I need to get back into some novels.