The Scientist and the Man in Black 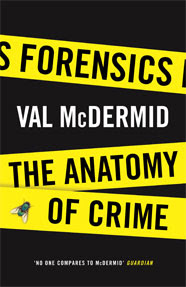 Call this the third in my extremely occasional series of reviews of non-fiction books.  As before I am including two at no extra cost.

Forensics by Val McDermid, is a terrific guide to the science of crime-solving.  McDermid was a reporter before she became a best-selling crime writer and it shows. She gives you just enough of the technology, while focusing on the people, and often on the history.

For example, the chapter on entomology begins with the earliest recorded case of insects being used in the investigation of a crime.  In China in 1247 a man was found murdered with, it was determined, a sickle.  The coroner ordered all 70 men in the area to stand together with their sickles.  Flies immediately detected what the eyes couldn't, identifying the guilty man by landing on his weapon to feast on traces of blood.

There are chapters on fire scene investigation, pathology, toxicology, digital forensics, and much more.  McDermid tells of heroic scientists, and others who botched their work, usually out of over-confidence.  Sometimes their mistakes ruin, or even end, the lives of suspects.

One horror story is that of Colin Stagg, an Englishman who seemed a perfect match for a forensic profiler's description of the man who killed a woman in a London park in 1992.  The cops tried hard to prove he was the man, even introducing him to a policewoman who claimed to be attracted to him and into rough sex.  Astonishingly, this guy who had apparently never had a successful relationship with a woman, offered to give her what she said she wanted.  Clearly proof of guilt!


The judge politely called the prosecution's theory of the case "highly disingenuous" and dismissed it.  The policewoman took early retirement for PTSD, and Stagg was awarded a ton of money because his name was so ruined he couldn't find work.  In 2008 another man was convicted of the murder, based on DNA evidence.

The last chapter is about giving courtroom evidence, which most of the scientists appear to hate.  I suppose if an attorney was going to try to make me seem incompetent and dishonest I wouldn't like it either.

But I do like Forensics, and highly recommend it. 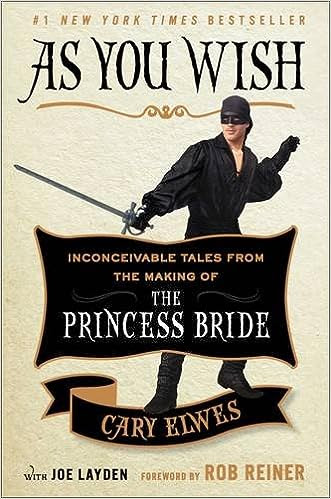 Unlike all the other books I have reviewed in this series, As You Wish by Cary Elwes has nothing to do with crime.  But it certainly has something to do with writing, specifically one of the best-written movies of all time. If you aren't a fan of The Princess Bride you may stop reading right now (and never darken my towels again, as Groucho Marx said).

Cary Elwes, of course, played Westley in that movie and, to celebrate its 25th anniversary he has published his memoir of the filming of the show.  If you love this flick you will relish his stories.  For example:

*William Goldman, who wrote the novel and the script (which for many years was considered by Hollywood one of the best unfilmable scripts around) was terrified that director Rob Reiner would butcher his darling work.  On the first day of filming the sound man picked up a strange noise.  It was Goldman, at the other end of the set, praying.

*Remember the sword fight between Inigo Montoya and the Man in Black?  Except for the swing on the horizontal bar, there were no stunt doubles (well, I have my doubts about Patinkin's flying somersault).  You are seeing four months of daily training with Olympic fencers and a solid week of filming.

*Wallace Shawn, who  played Vizzini, was terrified that Reiner was going to replace him.  Making things worse, the vagaries of film scheduling meant that his first scene was his most complicated: the Battle of Wits.

* Remember the scene where the six-fingered man strikes Westley with the butt of his sword and he falls down unconscious?  That wasn't acting.  He woke up in the hospital.

*When Andre the Giant (who played Fezzik, of course) was a child in rural France he outgrew the school bus, so every day he was driven to school by the only man in town who owned a convertible: the playwright Samuel Beckett.

So, if you love this movie, read this book.  To do otherwise would be... (say it with me) inconceivable.

Posted by Robert Lopresti at 00:00 7 comments