Where do you start? This is the guy who smuggled Kerensky out of Russia after the Bolsheviks came to power. He was intimate with Leon Trotsky. He met Stalin, once, and Lenin more than once. He was present at the creation of the modern world, the 20th century in all its wickedness. He lived, in other words, in interesting times, and he perhaps changed history. He was, of course, a spy.

Sun Tzu remarks that war is deceit. And our intelligence services, to borrow a phrase from John LeCarre, reflect our different national characters. Le Carre also noted the odd attraction of the Scots to the secret world, John Buchan an obvious example. Bruce Lockhart, as it happens, was a Scot.

He was sent to the British consulate in Moscow by the Foreign Office in 1912. He was twenty-four years old, and by his own admission, no sophisticate. He set out to learn the language, the customs and courtesies of the country, and Moscow itself, but above all, to cultivate social and political connections. This led, inevitably, to late nights filled with vodka and Gypsy balalaikas, sleigh rides to outlying dachas, and some dubious associations. It led also to an adulterous affair (Lockhart's wife had come with him to Russia), a scandal that got him sacked.

But he'd spent almost five years in Moscow, and the insular young sport had toughened considerably. He'd experienced the popular uprising firsthand, the abdication of the Tsar, the rise of Kerensky and the Social Democrats. As well, he'd witnessed the rough beast slouching toward war. Great Britain and Russia were now allies against Germany, and in London, the primary political concern was keeping Russia in the fight. Six weeks after Lockhart's return to England, in October of 1917, the Bolshevik Revolution overthrew the Provisional Government and established the groundwork for a Soviet state. Capitulation to Germany was widely rumored.

There were, in the corridors of power Whitehall, two, if not three, competing schools of thought. The first was to strangle the new enterprise at birth. The second was to treat with the Bolsheviks, to encourage their continued resistance to German advances on the Eastern Front. The third was to deploy both the carrot and the stick, and to this end, David Lloyd George, the Prime Minister, and Lord Milner, heading up the war cabinet, decided Lockhart was the man for the job. They sent him back, in January, 1918. This time, however, he served two masters, the Foreign Office, which gave him diplomatic cover, and the Secret Intelligence Service. SIS had a rather different mission in mind for him, to set up a clandestine espionage network, and penetrate the upper Soviet apparat. 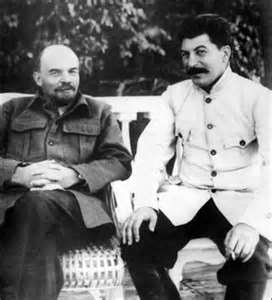 This wasn't quite the impossible task it now seems, in retrospect. Everything was up for grabs. The new Russian government's grasp on power was unsteady, and the Terror hadn't yet begun. For the moment, they were just trying to keep the trains running, and most of the people Lockhart met in Moscow and St. Petersburg were fatalistic about their chances. Lockhart suggested to Trotsky that he could allow Japanese troops onto Russian soil, to help fight the Germans, or an expeditionary force, perhaps British, but Trotsky wasn't having any. He knew an imperialist plot when he saw one. Lockhart was of course halfhearted in this endeavor, since he knew any intervention would have to be in strength, and the War Office wouldn't sign off on it. At best, it would only be a token number of troops, which was worse than nothing. He was also hamstrung by vitiation in London: they were still arguing which course to follow. In the event, Trotsky went to Brest-Litovsk, and negotiated a humiliating peace. German envoys arrived as conquerors.

Lockhart was in a vise. His sponsors back in London were fighting a rear-guard action---he himself was seen as an obstacle, if not already co-opted by the Commies, and the Russians didn't trust him worth a damn, either. He was hanging on by his fingernails, trying to follow conflicting instructions from home, and keeping the confidence of his hosts. Two events blew him out of the water. A bomb attack in Kiev killed the German commanding general who was a guest of the Kremlin. This was in late July. On the last day of August, a young Social Revolutionary named Dora Kaplan put two bullets into Lenin himself, at point-blank range. One of them hit his lung. "His chances of living," Lockhart reports, "were at a discount."
Now the rubber hits the road. Lockhart and his chief agent, Sidney Reily (yes, that Sidney Reilly---Lockhart's son Robin later wrote ACE OF SPIES), were implicated in the assassination attempt. Their operation came unraveled. Was our man in fact involved? Unlikely. He seems to have been taken completely by surprise. On the other hand, what about Reilly? I wouldn't put it past him. He was a slippery character, with a shadowy past, and an uncertain future, but that's a story for another day. He slips through the net. Lockhart is arrested and jailed by the Cheka. He's taken to the dreaded Lubyanka prison, dreaded for good reason.

Dark corridors, unyielding guards, the stone cells clammy with tears. At the end of a long hallway, a man waiting in an interrogation room, lit only by a lamp on the writing table, a revolver by his hand. "You can go," he tells the guards. A long silence follows. He looks at Lockhart, his face still. "Where is Reilly?" is his first question. An eternity goes by, Lockhart playing dumb, but in point of fact, he doesn't know. There is, he tells us, no attempt to bully him. The threat is implicit. He asks, finally, if he can use the bathroom.

Two gunmen take him there. I suddenly felt in my breast pocket a notebook, he writes. It was compromising material. There was no toilet paper in the stall. As calmly as I could, I took out my notebook, tore out the offending pages and used them in the manner in which the circumstances dictated. I pulled the plug. It worked, and I was saved.

Furious cables are exchanged, the Brits trying to spring their guy. In the end, Lockhart is released, and even at the last minute, the story of his escape is full of suspense. He's traded for the Russian diplomat Litvinov, but sentenced to death in absentia, later on, by the Soviet courts. He never goes back to Russia. 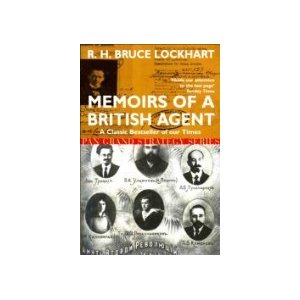 Lockhart lived into the fullness of his years, and died in 1970, at the age of eighty-two. During the Second World War, he coordinated the British propaganda effort against the Axis. He was knighted, too, Well deserved. A man who put duty first, if his dick on occasion led him astray.

Lockhart published MEMOIRS OF A BRITISH AGENT in 1932. It was a worldwide sensation. Why the British government didn't suppress it is an interesting question, but it was the story of an extraordinary success. The final section of his book is titled 'History from the Inside,' and indeed it is, the record of a man who was in the thick of it. He leaves a lot out, for sure, particularly the spook stuff. His son says he scoured through his father's remaining notes and diaries, after Lockhart's death, and turned it all over to the Foreign Office. Was it too revealing? We can read between the lines. Lockhart knew where the bodies were buried.
Posted by David Edgerley Gates at 01:00 3 comments