When the Ferry Is a Time Machine

Have you ever been to Ellis Island? It’s a short ferry ride from the Battery, at the tip of Manhattan, through New York Harbor to Ellis Island, a trip that costs only $13 ($10 if you’re 62 or over) and allows the visitor to travel more than a hundred years into the past. 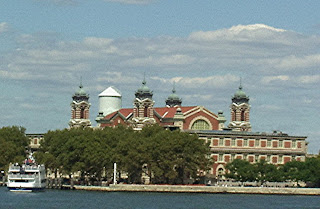 The gateway to America for 12 million immigrants from all over the world in search of a better life between 1892 and 1954, Ellis Island has been completely restored and is now managed by the National Park Service as a monument to the melting pot that shaped American culture.

My visit, with a French friend in New York on vacation, was no mere museum trip or history lesson for me. Both my parents came to America through Ellis Island: my father from Ekaterinaslav in the Ukraine in 1905 at the age of six, and my mother from Papa in Hungary in 1906 at the age of four. I’ve always regretted that I never visited Ellis Island with them. They went with a cousin shortly after the restoration in the 1980s, and both said that they remembered the Registry Room with its vaulted ceilings and high arched windows. 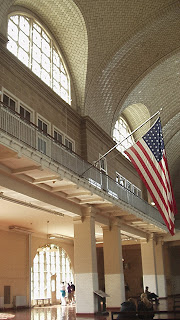 My mother’s most vivid memory was of her own mother, my grandmother, crying as she said goodbye to her mother, whom she knew she would never see again. My father remembered being given a banana as he waited to board the ship, and how, puzzled by this strange fruit, he bit into it skin and all.

Before you go, prepare for your visit by going online. The site www.ellisisland.com offers information about the Immigration Museum, while www.ellisisland.org allows users to search for passengers on the ships that brought the immigrants past the Statue of Liberty to Ellis Island. At the click of a mouse, I found both my father, on the ship’s manifest of the Caronia out of Liverpool and my mother, listed as a passenger on the Deutschland, departing from Hamburg. I discovered that my Aunt Anna and my Aunt Sophie, younger than my father, were actually named Chane and Schifre. I already knew that my mother, named Judith (and called Judy her whole life, till she died at 96), got an inadvertent name change at Ellis Island, when an immigration official heard the Hungarian pronunciation Yoo-deet and wrote down “Edith”—which is how she was listed on the records I found. (Her official signature was always “Edith Judith” or “Edith J.”—though the only people who called her Edith were telemarketers.)

The cousin who visited the museum with my parents enrolled my mother’s mother, our beloved Gran, on the American Immigrant Wall of Honor outside the Great Hall, overlooking the harbor and the Lower Manhattan skyline. When I emailed him, he reminded me that at the time, none of the cousins wanted to pay the hundred bucks to list our grandfather, who died long before we were born. I was moved to find my grandmother’s name among the 700,000 remembered in this beautiful and historic spot. Since then, I’ve put both my parents’ names and countries of origin on the Wall and am eagerly waiting for my granddaughters to be old enough to enjoy seeing them there.
Posted by Elizabeth Zelvin at 00:01 8 comments