John le Carré changed the landscape, no question. It’s not accurate, though, to imagine he sprang fully-formed from the brow of Zeus. He was a hundred-and-eighty degrees from the shockers of John Buchan and E. Phillips Oppenheim, and it’s often remarked that George Smiley is the anti-Bond, but Fleming was himself a real spy, Naval Intelligence in WWII (le Carré worked for both MI5 and MI6, during the Cold War), and Bond is clearly a conceit, an exaggeration of Fleming’s own masochism and snobbery, not to mention a curious sort of inversion: Bond (and Fleming) parallel the career arc of Kim Philby.

Smiley, on the other hand, might be an internalized version of le Carré’s own habits of concealment and emotional avoidance, and Philby’s treachery - which is plainly one of le Carré’s touchstones – might parallel on a national or historical scale, le Carré’s personal betrayal by his father Ronnie. This isn’t some startling apotheosis; le Carré has spoken and written about it with self-deprecating chagrin.

His literary precursors are Somerset Maugham, Graham Greene, Eric Ambler. He didn’t exist in a vacuum. But the influences we recognize aren’t necessarily literary. Film noir isn’t exclusively an American province, there’s a healthy dose of it British postwar movies (along with an equally irreverent streak of comedies). Brighton Rock, based of course on a Greene novel, is one example. Even better are the Carol Reeds of that era: Odd Man Out, Fallen Idol, The Third Not to mention the Dickens movies that David Lean made. It’s no surprise that these pictures contribute to a climate of mistrust and class resentments, or that they pave the way for the thickening claustrophobia of the Red Scare.

Not everybody reads pulp, either, and I’d like to make a case for Donald Hamilton. Dean Martin played Matt Helm as a Bond parody, but ’s books were darker. I’d recommend The Steel Mirror, not a Helm novel, but a standalone. It’s a Nazi war criminal/Commie menace hybrid, frightening and effective. And then there’s Richard Condon’s Manchurian Candidate. The Spy Who Came in from the Cold was, yes, a game-changer, and fifty-odd years on, it’s worth remembering how it moved the goal posts, but not without context.

Le Carré is about betrayal. This is his consistent theme. The Spy Who Came in from the Cold is about a deception operation. Leamas describes it at the end. You had a smart guy who suspected his boss of treason. We laid down a trail of bread crumbs, but artful, so it wasn’t that easy to follow. The smart guy was caught in his own snare. In fact, his boss was an asset of British intelligence, but we made him invulnerable by discrediting the investigation. The subtext of the story is class, a peculiarly inflexible British resonance. And the East German investigator, Fiedler, is a Jew, which comes in handy, some Hebe slyboots with a grudge.

The point wasn’t despair, or cynicism. The point was: These guys aren’t playing by the rules. And if we were still thinking, Gentlemen don’t read other gentlemen’s mail, we were going to get our ass handed to us. Le Carré, in that sense, isn’t that far from Bond after all.

I read The Spy Who Came in from the Cold in 1965, when I was taking Russian at , a nine-month immersion course, courtesy of the U.S. Air Force. The next year, I was in . I read The Looking-Glass War, and from a more informed perspective, I thought the book was complete baloney. You wouldn’t need to put a live agent in place, you could get everything you needed from electronic intercept. It made me doubt le Carré’s credentials. On the other hand, there was a lovely piece of tradecraft at the end, when the Vopo sergeant starts pulling the fuses in the breaker box in the apartment block.

Off and on, I ran hot and cold. A Small Town in Germany felt very authentic, from my own experience, but it was kind of inert. Then came Tinker, Tailor, and The Honorable Schoolboy, and Smiley’s People. Honorable Schoolboy is, I think, a misfire, but necessary. Smiley’s People - the title alone a nod to Kipling – is something of a summing up, and the nuts and bolts are worth the cover price all by themselves. George at Otto’s boat camp?

Then we have The Little Drummer Girl. “Sooner or later, they say in the trade, a man will sign his name.” Probably the best of the books. Le Carré got a lot of grief over it, because it gave a sympathetic picture of Palestinians in the camps, and a decidedly unsympathetic picture of Arik Sharon and the Israeli war hawks, but the story is about hunting a terrorist, and it’s in no way sympathetic to the murder of innocents. It’s completely involving in its spycraft, Winding the Clock, Shaking the Tree, and it’s of course about betrayal. There’s an extraordinary line at the end of the book, “… the last thing Becker wanted was to invent anybody.” This is le Carré’s own admission.

I wouldn’t say he fell off, not by any means, but I began to fall away from him. Our Game, and The Tailor of Panama, are very engaging books, but somehow not entirely present. I liked The Russia House, with its circular-error-probable, but not as much as I should have. I absolutely despised Absolute Friends. Not that it couldn’t happen, but that it took an unworthy shortcut, and an easy out.

My pal Michael Davidson, also a spy novelist, and career CIA, thought le Carré was guilty of moral relativism. I’m not so sure. There’s an interior monologue in Smiley’s People, when Smiley goes to , and looks east, across the Baltic, and thinks to himself, this is where the Iron Curtain starts, this is where the prison of thought begins, in the barbed wire. Smiley’s generation fought Hitler. Stalin’s legacy is just as poisonous. Smiley uses doubtful means, but he believes in the mission, and the end game.

Ambiguity perhaps defines le Carré. The Secret Pilgrim is one of his later titles. Too easy, of course, to try and pin a writer down through his admitted weaknesses. I think le Carré is more than the sum of his parts. Early on, in Call for the Dead, he says, “the warmth was contraband.” I can imagine he found warmth. His work is chilly enough. 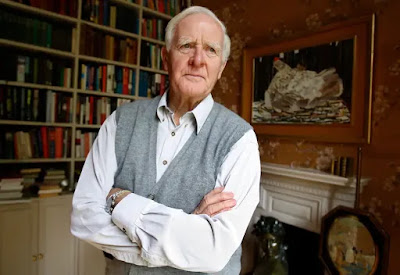