A Weird Christmas Tale for Writers


by R.T. Lawton
Terry Pratchett gave us the character of Hogfather to replace Santa Claus in his best-selling fantasy series. And, since it is only fair that Hogfather, like Santa, should have his own minions, I give you Blind Pig as a potential candidate for one of his elves.

Having worked the motorcycle gangs for several years, it did not take long to find a real-life representative for the character of Blind Pig, a hulk of a free-thinking biker who sees the world around him through a different filter. But, he does love his customized Harley.
So, here's your Christmas gift from me for this year.


A Weird Christmas Tale for Writers
Having been severely encouraged by his new old lady Patricia to acquire a modicum of culture and perhaps broaden his literary interests at the same time, the Pig made the momentous decision to write his memoirs and give them to Patricia as a Christmas present. He perceived himself as the only proper expert for this endeavor, seeing as how he was the sole person that truly understood himself.
Patricia for her part, was suitably impressed that the Pig was going to write anything, much less his autobiography. 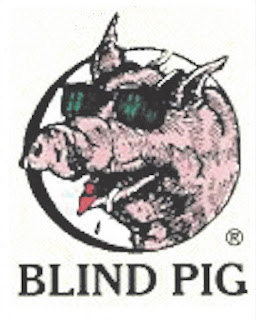 Having now heard the term autobiography banded about for the first time, the Pig was stymied for a minute or two. He had been so caught up in the idea of drafting his memoirs that he hadn't even considered the words auto and biography in the same sentence. Ambling off to the kitchen for another beer, he contemplated the two words and decided they wouldn't do at all for his project. In the first place, the Pig refused to ride in one of them steel cages known as an auto, that was for civilians in the straight life. And in the second place, he decided that most auto biographies must have been written by race car drivers, which obviously left him out. Therefore, being a motorcycle enthusiast, he decided to refer to his memoirs as a motor-cy-ography.
Thus having rendered that turning-point decision, he proceeded to gather up his writing materials. Lacking the immediate possession of either a computer or an old-fashioned typewriter, the Pig adjusted his mind to write in longhand. He promptly located the stub of a carpenter pencil and an almost dried-up ballpoint pen bearing the logo of his local bail bond agent. Finding no clean paper to write upon, Pig then moved on to cut up a stash of old brown-paper grocery bags that he'd forgotten to throw in the trash over the last several years. As he labored, Pig thought he had now acquired a glimpse into the demise of the modern writer, seeing as to how most grocery bags had gone from paper to plastic, thus depriving the writer of a convenient source of free paper material.
All set to begin with carpenter pencil in hand, the Pig suddenly found himself plagued by Writer's Block, which pleased him immensely because he now knew that he was on the road to being a real writer, otherwise he wouldn't be blocked. In order to break through this barrier, the Pig thought about what other writers talked of at times like these and knew immediately what he needed to do. Turning to the Z's in the Yellow Pages, he punched a phone number into his cell and waited for someone to answer.
"Hello. This is the zoo. How may I help you?"
"Do you have one of those Bullwinkle things?"
"Excuse me."
"You know, one of those big brown, grass eating things from the north woods."
"Oh, you mean a moose?"
"Yeah, can I borrow one for a while?"
"I'm sorry, sir. We only loan our animals out to other zoos, not private individuals."
"Just for a couple of weeks. I'll take good care of him."
The line went dead.
Incensed at his first rejection as an author, Pig retired to the bedroom and commenced rooting through the closet. In quick order, he extracted his black, ninja, steal-at-night clothes, a red Santa hat trimmed in white rabbit fur, several lengths of rope and two pair of old sweat socks from the laundry hamper. As the sun went down, he loaded all his gear into an old pickup he had borrowed from an unsuspecting neighbor. He also threw in a case of Jamaican Red Stripe beer, ten peanut and jelly sandwiches and three Moon Pies, just in case he got hungry during the coming escapade.
#
Early the next morning, as a heavy metal version of Jingle Bells played on the truck's radio, Pig returned to the house where his new old lady Patricia was waiting on the front porch. In the back of the pickup, Pig had one dazed, bound, gagged and blindfolded moose. With an apparent perception of the problem, Patricia then proceeded to explain to Blind Pig the difference between the large, antlered herbivore he had kidnapped from the zoo, ie. a moose, as opposed to the spiritual inspiration for a writer, ie. a muse.
Undaunted by this minor mistake, Pig asked if he could keep the moose in the backyard at least until after the Christmas holidays were over.
The moose, still gagged by the two pair of old sweat socks, had no say in the matter.
- not the end -

PS~ there is a Part Two, but we'll save it for maybe another time. In the meantime, keep on writin'.