Fritz Lang's movie Metropolis was released in 1927. Paranoid and hallucinatory, it's the first feature-length dystopian SF picture, but of course its spooky Teutonic future is at right angles to the spooky present of a doomed Weimar. 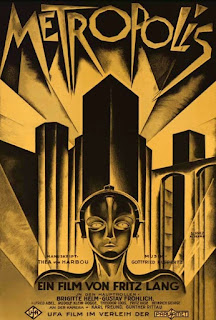 Philip Kerr's last Bernie Gunther novel, Metropolis, came out this year. It's set in 1928, and sure enough, Fritz Lang's chilly breath hovers over the story. (His wife, the screenwriter Thea von Harbou, steps into the book to pick Bernie's brain for cop shop detail - she's turning over some ideas in her head for a serial killer story.) Bernie remarks early on that for all its grime and despair, his home ground of Berlin mirrors both the human condition and the German national character, and you can say the same about a book or a movie, so is it true of this book or that movie?

Lang had a problematic relationship with the Nazis. He'd been raised Catholic, but his mother was originally Jewish. It was an obvious pressure point. And while we're on the subject, Thea, the wife, was a Nazi sympathizer from early days. Hitler and Goebbels were huge fans of Metropolis, as it happens. But after Lang made The Testament of Dr. Mabuse in late 1932, and Hitler came to power in January, 1933, the Nazis banned Mabuse, which was pretty clearly aimed at Hitler. Goebbels, on the other hand, offered Lang a job as head of UFA, the biggest German movie studio. It was bait-and-switch. Lang was being invited inside the tent, but the price of admission was spelled out: he was selling his soul. Lang said he'd think about it, and beat feet for France. Thea stayed behind and divorced him. UFA went to Leni Riefenstahl.

The question is often raised in the Bernie books - in fact, it's the central spine of the stories - What would you do as the world disintegrated around you, as it lost all moral force, what choices would or could you make? Metropolis goes back to the beginning, chronologically. It takes place before March Violets, the first of the novels. But it looks forward. The foreshadowing is all there, On the other hand, Bernie doesn't comment on what he sees and does from a future perspective. This dramatic irony, which is used in a number of the books, isn't present here. Bernie is blessed with ignorance of the future, even though the choices keep lining up. The answer to the questions is, You compromise just a little every day, and it gets easier.

How can we know, how could we possibly predict whether we'd rise to the occasion, show grace under pressure, or simply cave? It seems, generally speaking, as if even the major life-changing decisions we make are essentially taking the path of least resistance. If you've followed Bernie's history, as I have, over the thirteen books leading up to Metropolis, you respect him not just for his survival skills, but for his generosity, and his self-respect, even if he sometimes loses confidence. Seeing him here, right as his life is about to take a walk off a cliff, is enormously affecting, because you know what's coming, and he doesn't. The future of Fritz Lang's Metropolis, as frightening as it is, can't begin to conjure up the waiting chaos, and the terror. 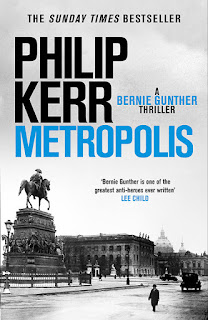 Metropolis, the novel, is a swan song. Phil Kerr died last year. This is one terrific run of books.
Posted by David Edgerley Gates at 00:00

I haven't read Kerr's books, David. But I have the Berlin Noir trilogy in my TBR pile. They sound fascinating. And the story about Fritz Lang and his wife is, too.

Philip Kerr was an excellent writer although his WW2 volumes are often hard to read, given that Bernie has a ringside seat on the Holocaust and the Nazi invasion of Russia.

I so love Philip Kerr's Bernie Gunther novels. I haven't read Metropolis yet, but I will. Soon.
"What would you do as the world disintegrated around you, as it lost all moral force, what choices would or could you make?" Whatever it is you're doing now. If you can. Most people's choices are not so much to compromise, just a little, but to deny anything's happening at all. Until it happens to them.

Terrific post, David. I've read the entire series, and agree with your assessment, with one single tweak: the compromises which get easier cut both ways. Gunther finds himself again and again doing terrible things in the name of righting monstrous wrongs in ways both large and small. Throughout he excoriates himself for his instinct for survival, right up to the final book (chronologically), GREEKS BEARING GIFTS.

Kerr had signed a three book in advance of his terminal diagnosis with cancer, and according to his widow, wrote METROPOLIS in a literal race against death. We will never know what he had in mind for the other two books, and what would have come of the set-up at the end of GREEKS BEARING GIFTS for Bernie to assist in his own "redemption."

Metropolis is one of those rare films I've watched more than once. What lessons for a modern America!

I've read some of Kerr's novels, but not all. The Shot came off a bit heavy-handed, and I never made it back into the reading light. Maybe yours and Brian's comments are the goose I need.

Metropolis the book sounds very relevant, just as the movie was in its day. Thanks David for the recommendation.

I like the movie but love every minute of M. It's great that Kerr made reference to the movie. I'll need to put the book on TBR pile.