I picked up a used book at a second-hand store not long ago. Boys of the Border, written by Mary P. Wells Smith, a 1954 reprint of a story originally published in 1907. It caught my eye because of the dust jacket art (see illustration below, no explanation needed), and because the inside cover had a hand-drawn map of the Mohawk Trail, in western Massachusetts, during the French-and-Indian War, when these frontier settlements were no more than scattered farmsteads, with the occasional fortified log palisade. Mary Prudence Wells Smith was well-respected in her lifetime, the author of several successful YA series, Boys of the Border the third in her Old Deerfield story cycle. I'm embarrassed to say I'd never heard of her, despite having a common curiosity about the history of that neck of the woods. 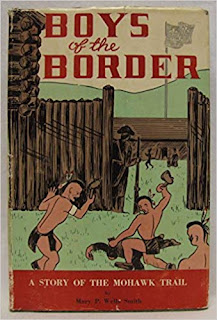 Drums Along the Mohawk it ain't, but it's pretty rousing all the same, and in both the Deerfield series and the companion Young Puritans historicals, she gives a convincing picture of daily hardships, forbidding piety, and an abiding mistrust of the Other, dark-hearted and pagan, stealers of children and sleep, the marauding Indian who came out of the deepest wilderness to prey on the luckless and unwary. This hidden terror was in fact the great unmapped continent of North America itself, too enormous to be contained or even imagined. An undiscovered country, whence no traveler returns.

It was a Leap Year. February 29th, 1704. In the early morning, a raiding party of French, Abenaki, and Iroquois attacked the small town of Deerfield, on the Connecticut River. They burned and looted houses, killed forty-seven people, and took 109 captives. They marched them 300 miles north to Quebec.

89 of the captives survived, and over the next two years, 60 of them were ransomed back. Others chose to stay in Canada, most famously the Rev. John Williams' daughter Eunice, who married a Mohawk. Rev. Williams wrote a hugely successful book, The Redeemed Captive Returning to Zion, framing the story as instructive of God's providence. In a larger context, it becomes the primal American fiction. 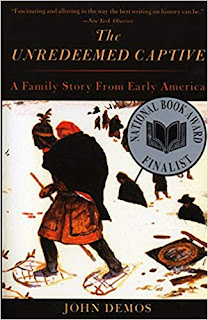 (John Demos published The Unredeemed Captive in 1994, the title a play on Rev. Williams' own. Demos explains the captivity narrative as a racial and cultural paradigm, and not least as gender politics. It could be the Red Man, it could be the Yellow Peril, it could be Mandingo. The story turns on rescue from defilement. It's also clearly, and unapologetically, about the triumph of an enlightened tribe or race over a primitive and degraded one.)

Leaving aside Mark Twain's hysterically irreverent essay about him, it has to be admitted that James Fenimore Cooper is the first American novelist, in that he tells American stories, liberated from a European sensibility. Twain himself is a legatee and beneficiary of Cooper's. Huck Finn is completely American, but his literary forebear is Natty Bumppo. Cooper's romances have all of the generic conventions of the period, nor does he have much fluency or stagecraft, and yet he's engaging. What he brings to the table is conviction. He's got authority. Cooper knows the architectural foundation of his books is Manifest Destiny. 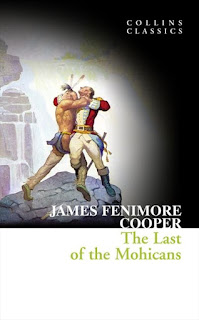 The captive narrative many of us are most familiar with is John Ford's 1956 movie The Searchers - and the novel by Alan Le May. The story is said to be based on the actual kidnapping of Cynthia Ann Parker by the Comanche. Nine when she was taken, she grew up Comanche, married, and had a family. Her eldest son, Quanah, became one of the last great war chiefs of the Comanche nation. She was recaptured by U.S. cavalry and Texas Rangers in a raid 24 years later, but never reintegrated into white culture. In truth, she wasn't in need of rescue.

The Searchers, for all its savagery, is about reconciliation, something both Eunice Williams and Cynthia Ann Parker stubbornly resisted. America, too, seems unreconciled, our vast interior a dark unknown, our captive imagination unredeemed, an unreliable narrative. 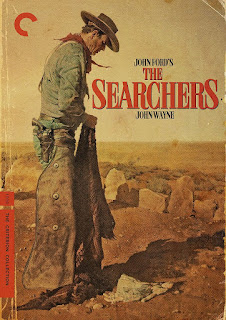 I am unfamiliar with the work of Mary P. Wells Smith. Thanks for the tip. Sound interesting.

Interesting. Interesting, too, how few mysteries are set in this period. I have the sneaking suspicion that we are not quite so comfortable with the narrative of heroic pilgrims and pioneers/ empty continent/ savage inhabitants as we pretend.

I've never read "Boys of the Border", but I have read "The Unredeemed Captive" - magnificent work of history - and "The Light in the Forest" (Conrad Richter), which is magnificent fiction. Speaking of Conrad Richter, he pursued the nuances of captive/redeemed in many of his short stories and other novels, including The Awakening Land trilogy. One of the main things that white Americans were never comfortable with - still aren't - is that not only were so many of the captives assimilated by the Native Americans, but that some people actually ran off to join the Native Americans. By all accounts, it was much easier to assimilate towards the indigenous way of life than the other way around.

You're right, Janice, very few mysteries are set in that milieu, and that's something to think about... Hmmm....

Really interesting. Certainly the woman captured by "savages" is an American ur-story, just as in Australia it is children who vanish.

Another mystery-connection to this sort of story: About 1640 Penelope Kent and her husband were attacked by natives near Sandy Hook, NJ, after surviving a shipwreck. She was left for dead and hid for several days in a hollow tree. Eventually she revealed herself to Lenni Lenape tribesmen who healed her and took (sold?) her to the Dutch in New Amsterdam. She married a man named Stout and Rex Stout was a direct descendant.

Have you read Leslie Fiedler's classic essay “Come Back to the Raft Ag’in, Huck Honey!” ? He was the first to point out (in 1948) that the classic American literary trope is a bro-mance so to speak between a white man and a "primitive" man. Bumppo/Chingachgook, Ishmael/Queequeg, Huck/Jim, etc. We see it in mystery fiction, too, in what Earl Emerson called the Sociopathic Sidekick. Robert B. Parker was certainly aware of that essay when he developed Spenser/Hawk. Harlan Coben turned it on its head by giving his Jewish hero a "savage" WASP sidekick.

Excellent post, David. Food for thought. CYNTHIA ANN PARKER starved herself to death, of course, rather than cease to be a Comanche. Occasionally books and movies touched on the captive who wouldn't be fully reconciled to 'civilization,' e.g. TWO RODE TOGETHER and HOMBRE.

Janice -
Good point. My own bounty hunter stories and Richard Boone's mystery/Western series HEC RAMSEY are both set later, in the early 1900's, which is of course a period of enormous change and cultural acceleration. Maybe the earlier frontier times seem too fixed - at least in historical memory - but I suspect you're onto something, that the heroic "winning" of the West is deeply ambiguous, and for the losing side, the Plains Indians, a genocide.
Andrew -
TWO RODE TOGETHER is one of my guilty secrets. Ford pretty much disowned it, but I have an abiding soft spot for it. For all the slapstick, it's actually much darker even than THE SEARCHERS. For a more recent captivity narrative story, my pal Chuck Greaves recommends the 2016 novel NEWS OF THE WORLD, by Paulette Jiles.

There was a good western captivity story in an issue of The Digest Enthusiast a year or two ago. Darned if I can recall the author or title though.

One subplot in Sean Haldane's THE DEVIL'S MAKING involves a captivity storyline. Historical mystery set in British Columbia soon after the U.S. Civil War where the primary population is native tribes with a few thousand British and American settlers.