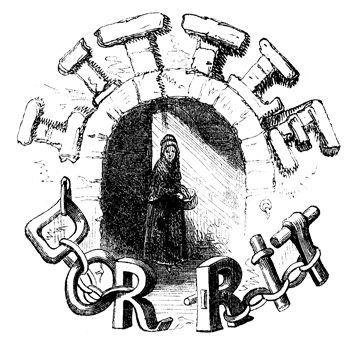 Ever read Charles Dickens’ Little Dorrit? It's not a light read but please do. Written from the heart, Dickens’ own father was incarcerated when he couldn’t pay his family’s debts. A century and a half after his novel revolutionized society’s notions about debtors’ prison, it’s become relevant again.

To refresh, imprisonment for debts is the novel’s central theme. Edward Dorrit had been a gentleman of means and manner before a business reversal sent him to the Marshalsea debtors’ prison. As his daughter Amy (Little Dorrit) works toward paying the two-decade-old debt, an investigation by Arthur Clennam brings to light that Dorrit is an heir to a sizable fortune. Against a background of banking and brokerage schemes and financial collapse, Clennam, through his own honesty, finds himself in prison after the loss of his own fortune.

The Magic of Economics and Politics

The rise of debtors’ prisons is again plaguing our society with ever new and clever machinations. Chances are your legislature, like mine, brags how much money it saves in taxes. Oddly, they haven't cut back spending, certainly not legislators’ salaries, but they claim to have cut taxes. Now closely watch the handkerchief in this hand…

Consider a typical example in Florida. Perhaps you get sick and you lose your job. You can’t pay your automobile insurance. Because you’re a good citizen but naïve about the statutes, you don’t drive your car but, hoping for a little money any day now, you don’t turn in your car’s license plate (called a ‘tag’ in Florida). Even if you never drive during that period, the state of Florida will charge you $150 up to $500 for ‘financial irresponsibility’ and revoke your driver’s license. That’s right: You couldn’t afford insurance but as you’re trying to recover financially, you’re forced to fork over as much as $500 in escalating fines plus fees. It’s difficult to argue this isn’t punishing the poor for being poor.

States constantly authorize new categories of fines and fees while criminalizing once civil violations to supplement their shrinking tax base. These are called LFOs, ‘legal financial obligations.’ For example, some states are shifting minor infractions such as parking violations to criminal jurisprudence. Truancy is now a crime but the opposite is also a crime– schooling your child in a district you don’t live in.

And guess who the fines are aimed at? Certainly not those wealthy enough to lobby against paying taxes. That’s not me saying that… it’s the conclusion of a fifteen-state study by my alma mater’s law school, New York University. It’s also the conclusion of an Ohio study that found up to 20% of county jail bookings were the results of inabilities to pay and, to the surprise of some, more women were jailed than men, mainly minority and especially Hispanic women.

Under Pennsylvania law, truancy is now a parental crime. A father or mother can be jailed five days for each truancy violation by their children and on top of that be charged for unpaid fines and fees. As Eve Fisher mentioned, Eileen DiNino, a mother in jail for truancy debts, died recently after being denied medical care after complaining about pain and inability to breathe. In a county where 1600 parents have been locked up, a mother needlessly died after being jailed for unpaid fines.

The Ohio Supreme Court has instructed judges to stop sending the indigent to jail, yet Ohio has authorized non-judicial ‘mayor’s courts’ that aren’t courts in any recognizable sense. Running a sort of collection agency, the magistrate doesn’t have to have a law degree and the so-called ‘courts’ have little or no public accountability or oversight.

At the same time government has cut back services for the poorest among us, a rash of laws have taken aim at the less fortunate. Thus we’ve defunded child care and cut back food programs. On the verge of the banking debacle, President Bush signed the Bankruptcy Reform Act of 2005, increasing bank profits while making bankruptcy more difficult and costly for consumers and impossible for student loans. The theory was that even if a citizen was dead broke, when sufficiently threatened, he or she could somehow come up with money to pay, even if they had to forego food and shelter.

The war against poverty has become a war against the poor. Among the services cut back has been mental health. Our prisons now hold ten times the number of mentally ill than do our state hospitals. If you’re homeless, some places make it illegal to sleep or even lie down to rest. Other places ban sleeping in cars. The city of Orlando will attempt to arrest you if you publicly feed the homeless– it’s not good for that touristy promotional image.

Since imprisoning the poor because of debts is technically illegal in most states, prosecutors and bond holders rely on legal subterfuges to jail the indigent, and often the accused are not apprised of their rights. For example, a respondent doesn’t have the money to pay a $10 debt that grows to $100 in interest, fees, and fines. A DA or bond-holder files a motion of contempt and argues failure to pay the fine is contempt of court. Judges don’t like contempt of court and may well agree. They can move a civil case into the criminal realm. Most states reserve the right to charge citizens for their own prosecution.

Thereafter, of course, the fees and interest continue to climb. A $30 or $40 debt can easily reach three figures or more made worse by state-authorized collection agencies. If you’re arrested, expect to pay double or more for commissary cigarettes and candy, and be charged ten times the going rate for phone calls. Don’t be surprised to be billed for the recording of visits with your family.

In part of Washington state where average felony fines and fees of $2500 increase at 12% interest, inmates can be charged for laboring on the county work crew. An Alabama private probation firm charged $2100 in fees and extra fines for a $200 misdemeanor. An Illinois woman was sent to jail for a $280 medical bill she didn't owe. An indigent Michigan father caught a bass out of season that started a cascade of fines, fees, jail, and a huge bill for room and board while incarcerated. Also in Michigan, a man forged a pain medication prescription and was billed a thousand dollars in court cost… part of which included the cost of the county employees' fitness center.

Complicit judges have contended that in American society, there’s no excuse for poverty, that the poor simply don’t want to work: “They’re poor because they want to be,” goes the thinking. And yet nearly two thirds of inmates in jail have never been charged with anything; they’re there because they can’t afford bail or even a bond.

Out-of-touch judiciary have expressed incredulity that the impoverished don’t have credit cards. According to one judge, the poor could pick up cans beside the road to pay fines and fees. This same judge went on to sentence a man who’d just started work and was due his first paycheck to three weeks in jail, knowing his employer might terminate him– and then made employment a condition for the man’s parole. A Colorado man lost his employment because of a work injury, then, the day before he was to start a new job, an indifferent judge jailed him for failure to pay a traffic ticket for an illegal turn.

Profit in the Poor

The situation has worsened with privatized prisons and private probation companies. These businesses argue they have a right to be paid for room, board, and supervision, even if the “guest’s” stay is involuntary and even if he’s innocent. It’s in the interest of these profit-driven companies to seek the most lucrative penalties possible and their contracts with states mandate quotas to keep for-profit prisons full. Corrections Corporation of America told its shareholders “The demand for our facilities and services could be adversely affected by … leniency in conviction or parole standards and sentencing practices.” Indeed, private companies have argued and won the right to extend the original sentence term if a parolee cannot complete his payments. You read that right: A non-judicial, for-profit business can supersede and extend a court’s sentencing.

But that’s not all. Say you’re tried for a crime you didn’t commit but you can’t afford to hire an attorney. The federal government says one must be provided for you. But counties in Florida (led by the head of a public defender’s office who campaigned on cutting services to those who needed legal representation) and 42 other states now bill the accused. In at least one state, a defendant can be billed for a jury trial.

What if you’re innocent? You can be adjudged not guilty and yet be sent to jail: Even though you are constitutionally entitled to an attorney, you face the possibility of imprisonment if you can’t afford to pay one.

One state thinks these harsh judges and judgments are wrong and counterproductive. New Jersey believes people want to do the right thing. Last year’s Safe Surrender brought more than 4500 financial fugitives in to settle fines and fees at a significant reduction.

NPR highlighted a war veteran living in his car who lost his driver’s license and was hit with vehicle fines, fees, and interest topping $10,000. Without a license he couldn’t take advantage of assistance programs or take a job that required driving. The Safe Surrender program reduced the $10k to a more reasonable $200… and in a bout of irony, the once homeless vet now works for the local government handing out parking tickets.

I haven’t seen the published results, but while other states find that jailing and billing the impoverished costs more than it brings in, New Jersey may be showing us that compassion can cost less.

The world is watching. These issues have arisen on NPR, in the New York Times, and even the pages of London’s highly regarded magazine, The Economist.

If counties and states are clearly violating the civil liberties of the poor, why hasn’t the Supreme Court weighed in? Issues take a while to make their way through the lower courts and fighting them takes money, which by definition the poor don’t have. It also takes awareness and the poor are often beneath the consciousness of the rest of us. But in fact, the Supreme Court ruled forty and again thirty years ago that it wasn’t lawful to jail those who can’t pay. But… the Supreme Court also hasn’t objected to counties forcing indigent defendants to pay for public defenders where application fees alone can amount to $400. States have exploded in arrests of the indigent.

Then there’s the flip side. Staying out of jail may depend upon the amount you owe. If it’s millions or billions, if you’re a major banker or Wall Street broker, a scheming insurer or flim-flam mortgagee, America forgives you. Officially, that is, our government. Me, not so much.
Posted by Leigh Lundin at 00:01