by John Floyd
I love movies. Always have and always will. Timewise and expensewise, I probably love them too much--but I console myself with the knowledge that I receive more from movies than mere entertainment. I often learn from them as well. The writer part of me tries to figure out why certain things in a story work and why certain things don't, and I consider that information helpful when I sit down to write my own fiction.

One of the things I enjoy most about films is that now and then they deliver something totally unexpected. A plot reversal, a fascinating location, a twist ending, a quirky theme, an outrageous character. I once heard someone say that anytime we watch a movie--or read a short story or novel--we make a silent deal with the creator of the piece: we agree to give him our attention and he agrees to give us surprise.

A guaranteed eye-opener happens when the producer/director/whoever chooses to cast someone who's usually a protagonist in the role of an antagonist. This kind of thing--angels playing devils--happens more often than you might suspect, presumably because many actors fear being stereotyped, but I figure it's always a bit tense and chancy for both the actors and the filmmakers. Sometimes straying from the norm pays off, and sometimes it doesn't.

I recently found an interview on YouTube in which the late Henry Fonda, who was always cast as the hero, talked about his one-and-only role as a bad guy. Italian director Sergio Leone had approached him about playing a villain in one of Leone's spaghetti Westerns, and after being advised by old friend Eli Wallach to accept the role, Fonda traveled to Rome to meet Leone for the first time. Before their meeting--and wanting to look more sinister and less recognizable--Fonda said he let his beard grow a bit and put in brown contact lenses to hide his famous blue eyes. But when Leone saw him, the director said, "No, no!"--he wanted those baby blues, and did not want any disguises. Fonda was later told that in the scene that introduced his villain to the audience, when he's about to murder a child in cold blood, and the camera swings slowly around to reveal his face for the first time, Leone wanted viewers to gasp and drop their popcorn and say, "Jesus Christ!--that's Henry Fonda!!" 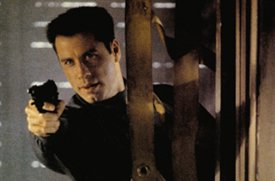 There are also many more roles in all the above categories that I've not mentioned. Help me out, here, if you can think of them. 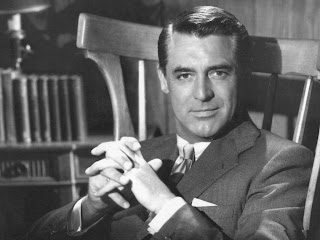 Not everyone, of course, is corruptible. To my knowledge, the following male actors have never played true villains: Tom Selleck, James Garner, John Wayne, Cary Grant, Paul Newman, Gary Cooper, Jackie Chan, Steve McQueen, Mel Gibson, Tom Hanks, Charlton Heston, and Clint Eastwood. (I started to put James Stewart in this squeaky-clean list until I remembered After the Thin Man. And here's my disclaimer: Wayne was pseudo-villainlike in the roles of Genghis Khan and the Ringo Kid, and Eastwood came close in both Tightrope and Beguiled.)
Even more fun than watching good guys go bad is watching conventional villains occasionally play decent, law-abiding folks: Jack Palance in Monte Walsh, Bruce Dern in Nebraska, Gary Busey in Silver Bullet, Michael Ironside in Top Gun, Robert J. Wilke in Stripes, Dennis Hopper in True Romance, Lee Van Cleef in For a Few Dollars More, L.Q. Jones in The Edge, Lee Marvin in The Dirty Dozen, Christopher Lee in The Devil Rides Out, Peter Cushing in The Horror of Dracula, Alan Rickman in Galaxy Quest, Steve Buscemi in The Abyss, Gary Oldman in Immortal Beloved, Christopher Walken in The Dead Zone, Donald Pleasance in The Great Escape, etc.
Okay, enough of this. That's my analysis and these are my opinions. By now you have probably diagnosed me as a certified, raving, dreamworld-addicted maniac. If so, you are incorrect. I am perfectly normal and sane.
In fact, I am Spartacus.