What I Learned While Synopsis Writing


by Dixon Hill
By Dixon A. Hill 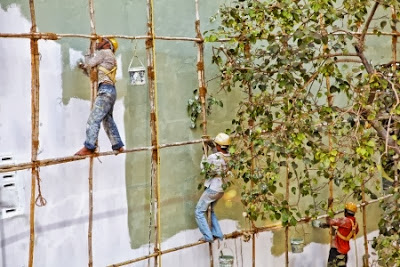 Well, I’m pleased to say I finally managed to complete the synopsis for my novel-length manuscript.

The experience certainly taught me to envy those who write with an outline. If I’d had one, up front, I suspect my synopsis would have been finished much quicker. But … that’s just not the way I do things, because—while I’m sure it would help in synopsis creation—it stymies my story-writing something awful.

I’m one of those idiots who practices what I call Modified Organic Writing: I write without an outline, waiting to see what transpires as my characters interact (the organic part)—though I usually do have a pretty good idea where things might be headed (the modified part). If that seems confusing, don’t sweat it, buddy—I really don’t quite grasp what I’m doing, myself. (I’m sure you’re shocked—SHOCKED!—to hear that.) 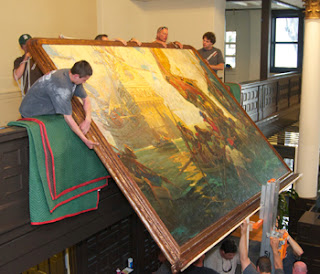 One problem this creates, is that I have a hard time wrapping my mind around the entire novel, once I've got it completed. I can grasp several parts of it, at the same time—but my mind can’t quite manage to encompass the entire work at once. I wind up looking like the guy in this photo: Not the guy in the foreground; that guy in the center, behind the painting. You can only see his hands and the top of his head. He’s behind and underneath the thing. If only he could stand out front, he might get a chance to see what the painting is really all about. Then, maybe he could come up, not only with a synopsis, but perhaps with a logline or something, such as John M. Floyd discussed earlier this week.

If that guy in back, could come out from under it and stand in front of the painting, he might be able to tell someone it’s: “An exciting depiction of pirates infiltrating a port town they’re about to raid!” As it is, however, he’s really not in a position to grasp what he’s talking about, if he tries to describe what he’s got his hands on.

Anyway, for the use of anyone searching for a method they can use, to find their way out from behind or beneath an organically created novel, to a workable (perhaps even winning??) synopsis, I offer the following lessons I learned during the process. Will any of this work for you? No idea, buddy. But, I’m tossing it out there just in case you can use something, here.

When I posted, last year, about my trouble writing a synopsis, one of the comments people made really stuck in my mind. It warned me to be careful not to create an outline instead. I didn’t really understand what that meant at the time, but have a much better—though probably still incomplete—feel for it now. In fact, I eventually discovered I was doing just that. Building an outline, instead of a synopsis.

Stymied because I couldn’t wrap my mind around the entire manuscript, I finally opted to work chapter-by-chapter, distilling each chapter to a paragraph or two—not worrying too much about length, because I knew I’d cut later. When I was finished, of course, I realized I’d created the outline I was trying to avoid. It was long, very informative—but utterly lifeless.

That outline wouldn’t sell a book; I knew that. But, the next morning, I began to realize that what I’d constructed might be a very valuable tool, if I could decide how to exploit it to advantage.

Most importantly, perhaps, I realized that I’d lucked-out by creating a chapter-by-chapter outline, as a first step, because this gave me a distillation of the work, which my mind could encompass. Then, as I worked on the synopsis, I felt my eyes opening to what had really been meant in that comment.

Along the way, I visited a website I found quite useful: LisaGardner.com There is a lot of information out there, about synopsis construction, but somehow I just couldn’t grock what it all shook-out to mean. At this website, however, the author offers tips for successful synopsis writing (under Writer's Toolbox) which I found I could understand. 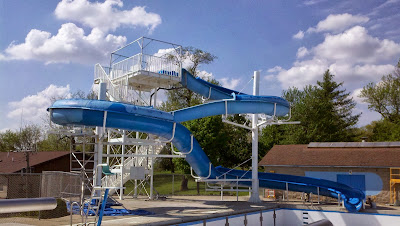 To me, the pool slide in this photo sort of demonstrates the use for the outline-tool I had created. In the photo, the rectilinear white structure supports a curved blue slide designed to facilitate rapid and exciting movement that concludes with a climactic splash (once the pool is filled, of course).

I see the chapter-by-chapter outline as serving the purposes of the white structure supporting the slide, which is the exciting path followed by our synopsis.  But, notice how little of the outline structure actually touches the slide story.  To streamline and curve the slide, increasing the ride’s excitement, I concentrated on telling only the central core of the story, deleting all mention of any events or characters that didn’t have to be there. Then, I went over that story again, polishing it to a high sheen, while ensuring I didn’t add something that wasn’t in the novel.

My hope is that the synopsis reader never even senses that the outline support structure is there.  And, that's okay, because whoever reads the synopsis isn't going to climb the stairs on that white tower..  Instead, s/he's going to step from ground-level straight onto the slide, and—WHOOSH!  Off we go to story splash-down.  Hopefully.

My story had to leap several gaps, of course, because so much supporting information was left out. Look at the slide picture again. See the distance between supports? The slide rides right through those gaps, but can’t sag, or the ride will be ruined. In a manner I find it difficult to explain, reinforcing to prevent sag made it possible for me to spot small places in my novel, where I needed to include a one or two sentence explanation, in order to close or tighten a loophole.

Thus, one of the most important discoveries I made was that constructing my synopsis not only created a tool for selling it, it also helped me correct problems within the story itself. I was so bowled over, in fact, that I’ve changed my attitude on story outlines to a degree.

I still don’t plan to outline prior to writing a story or novel, however, I now plan to create an outline, and generate a synopsis, prior to final editing. I’ll probably start by creating the outline and synopsis just after the first full edit, so that I can get a better handle on the entire work—as a whole—which I now believe will help me conduct better-targeted cutting and editing of the manuscript.

So, there you have it. What I learned from writing a synopsis, in a nutshell.

A good exposition of a difficult subject. I taught a novel writing workshop once for Midwest Writers for which students were required to submit a one-page synopsis. They often made a hash of this by trying to edit down a multiple-page synopsis or even longer outline. I asked them, as an exercise, to start from the other extreme: a one-sentence synopsis. Then give themselves five sentences, then ten, and so on until they'd filled their page. It got them focusing on the part of the story you illustrated with the blue slide.

Dixon, as you know, I also do not write with an outline. When the rough draft is complete or nearly there, I "outline" by writing a one or two-line summary of each chapter. That's used to examine sequence, pace, and plot sense. It helps when editing and is a big aid in spotting problems as well as writing a synopsis.
Good luck with the novel!

Excellent post, Dix. I learned what I know about synopsis writing from a piece by Beth Anderson years ago. She recommends what Terence said: start with the one-sentence logline or elevator pitch, build the paragraph for the query from that (or maybe she didn't mention that step, but I do), then the one-page synopsis, then the longer synopses you might need: 500 words, three pages, six pages. You can't go too far wrong if you keep answering "What's it about?" at every level. And as you say, if you remember you're a storyteller at every level (ie keep sliding!), it will engage the reader.

I loved two parts of this to especially absolute wonderfulness! OK, that sentence makes no sense so consider it poetry. The first is the idea that we are the guy behind that picture when we write, having our hands on something we can't even see. That's true for so many creative things! And it's true that no matter what we create, to fund it or sell it we have to tell people what it is -- even though we have the least clear view of that then does anyone else walking by! Yet WE are the ones who have our hands on it! And I loved, second, the slide and its supporting structures and the ride down it being the story. I have never had such a clear grasp of the relationship between story and structure in my mind before now. THANK YOU for this piece!!!

Good piece - I'm going to try this with a story that currently has me stuck. I know who/what/how, and I even have huge chunks of it written, but something is missing...
Off to explore through the great jungles of prose with a machete!

Terence and Elizabeth, I think you're right—that's a great idea. In fact, the method I finally settled on -- in order to cut myself off from the outline, and shift into “story” mode—was to create a one-page synopsis first. Then, I created longer versions, and polished until I got the product I'd been aiming for. I should have mentioned this step in my post, but I was running up against a shortened deadline. And, I didn’t read John’s post about loglines until I’d completed the work, or I think I would have followed your advice more closely. I think you’re right: drilling down to the logline would have been a great way to focus on the central core of the story.

Anon, I’m glad you found it useful, but read the paragraph above. If you already read it, I suggest you read it again, and take it to heart. Concentrating on that logline is probably the best way to get started on the right track.

Good luck with the story, Eve. And, I love that line: Off to explore through the great jungles of prose with a machete!

Thank you, Fran, for the best wishes, etc.

Dix, keep us advised on the progress of selling your novel. I've really enjoyed your short stories and therefore look forward to reading the novel.

this is a matter of import to me because I wrote a synopsis (or possibly an outline. or an ad for tea kettles. it's all a blur now) for my novel. I loved Terence's suggestion. The elevator speech is related to what Hollywood calls high concept: sell it in a sentence. I think my piece does that, but so far nobody is knocking on my virtual door.

One thing that drives me nuts is that no two publishers/agents ask for the same thing. One page synopsis. Three page symopsis. Ten pages. Three chapters. Six bits, a dollar.

As a friend of mine who makes a living keeps asking me "Are you SURE you want to be in this business?"

Rob, I'm still chuckling. I know what you mean. That's why I took the advice of somebody who told me to write a 1-page synopsis first, then create synopses of additional length, so I'd have whatever the agents I targeted wanted. Seems like the only solution. lol