You are probably related to a military veteran, or at least know one. With today being designated as our national Veteran's Day (Canada refers to it as Rememberance Day), please take time to support your troops in whatever manner you see fit, and to also honor the memory of those gone past. These people have protected your freedom over the centuries and stood sentry on your walls, wherever those walls may have been. Regardless of how you personally feel about any given war, know that it is not the soldier who makes the decision to go off to battle, it is the politicians that send him. The soldier merely does his duty and goes as our leaders have ordered.

For me, it's been a little over 44 years since I went in-country at Pleiku up in the Central Highlands, then caught a two-engine, tail-ramp aircraft to fly about 80 kilometers east to Camp Radcliffe at a place called Ankhe. My duffel bag was my seat (they didn't worry about seat belts) and my orders in hand were my ticket to fly.

There in the camp, I'd wake up in morning, crawl out of my sleeping bag, wander bleary-eyed from my three-man, wood-constructed hooch, with an aluminum basin in hand and head for the overhead 55 gallon drums that supplied water for our showers, hoping I didn't have to shave in cold water again. 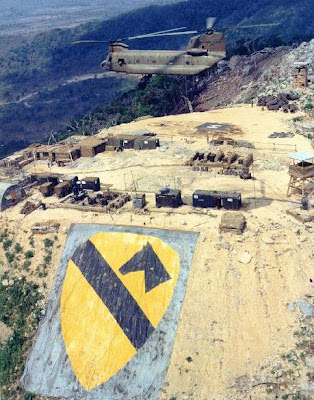 (Photgraph used by permission of Ray Smith at Ray's Map Room. http://rjsmith.com/Images/cav_patch.jpg Visit it some time and click on designated spots to get a photo or short history for that location.

Engineers had gone up on Hon Cong Mountain where we had a ground surveillance radar site and poured a slab of concrete. They then proceeded to paint the 1st Air Mobile Cavalry patch in black and yellow on that cement slab. I suspect the theory behind putting it high up on the mountain was that the Cav wanted to mark its territory, much the same as men have done for centuries.

Most of us camped down below had the same black and yellow patch sewn on the left shoulder of our jungle fatigues. Camouflage insignia had not yet come into fashionable army wear, but being as we had no wish to come to the attention of enemy snipers by wearing bright colors, most of us soon used a ball point pen to darken the cavalry yellow.

We weren't the first ones to this party

In the Spring of 1954, the French were heavily engaged in the struggle for Dien Bien Phu, a French fort also built in a valley surrounded by mountains. Their theory was to lure the Viet Minh into a fixed battle rather than hit and run guerrilla tactics. Unfortunately, there was a flaw in the plan and it did not go well. Seems the Viet Minh had found a way to put artillery on the surrounding mountains in order to bombard the French at will. Their fort was soon isolated from the outside world and collapsed.

Days afterward, Groupment Mobile 100, which had been stationed in the Pleiku-Ankhe area to guard the Central Highlands, was ordered to withdraw from their positions in Ankhe as being indefensible. Fifteen kilometers west of the Ankhe airfield, the Viet Minh 803rd Regiment ambushed the French Task Force in a series of running fights along Highway 19. Later, the VM 108th Regiment joined in to spring its own ambush on the French column. Survivors of the Group managed to withdraw to fortifications at Pleiku, but their unit ceased to exist as a fighting formation. 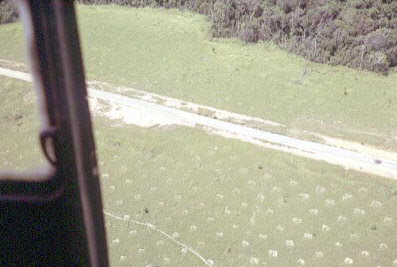 Those members killed in the ambush were later buried in the French Military Cemetery not far away on the crest of Mang Yang Pass. Legend has it they were buried upright with their faces to the west, toward France.

After the fall of Saigon in 1975, the Vietnamese Communists allegedly removed all the white headstones in order to erase reminders of French and American presence in the south.

In the old days, a fallen soldier was usually buried in the area close to where he died. No doubt the French still honor those fallen soldiers laid to rest at Mang Yang Pass, they just no longer have a monument in that location. In more modern times, under the concept of Leave No Man Behind, our fallen servicemen and women are brought back to the States, rather than buried in military cemeteries on foreign soil, such as ours were in France, where many WWII veterans were laid to rest during those war years.

Of Love and Death

My opening salvo in the courtship of my wife, Kiti, was my Take-A-Veteran-To-Lunch Scam. Eventually, it worked.

In more recent years, I informed Kiti that I would like to buried in the veteran's cemetery up in the Black Hills of South Dakota where we used to live. Seems the VA has a policy where the first to go spouse can be placed at the seven foot level and the last to go can be placed just above the other. One name goes on one side of the headstone and the other name goes on the other side. That's our government in its efficiency towards space allocation.

In any case, I happened to mention in passing that whether I go first or last, I'd still like to be on top. Don't know if that's a guy thing or a matter of competiveness.

Kiti has an independent spirit. I can live with that and rather enjoy it. But, the rank she held in her Army Reserve Unit is one pay grade higher than my active duty one. With the life I've lived, I really didn't think I'd last this long, but if I want to be the one on top, I believe I'd best try to last a whole lot longer than originally anticipated. Otherwise, she just may pull rank on me. Son of a gun.

Hey, time to go put the flag out on the front of the house before my morning coffee.

And for those of you who've been, "WELCOME HOME."

This is great stuff, R.T. Makes me proud to e-know ya'!

RT. Thanks for sharing your memories. I'm glad, with everything you've taken on in your life, you managed to make it to be with us today. Thank you and Kiti both for your service. I'm raising my flag and my coffee cup to you.

I'm grateful you and Kiti and everyone else is safe and sound.

Good piece. You might be interested in the new book, reviewed today in the Times, The Beauty and the Sorrow about what my folks always referred to as the Great War and the subject of the original 11/11/11 memorial.

Wonderful piece, R.T. and my thanks for your (and Kiti's) service. Our soldiers, marines, airmen, and sailors make me proud and grateful; no matter the war or conflict. We have the best in the world.

I spent 8 years active duty in the USN and 13 as a Naval Reservist, and never once had a shot fired at me in anger. I was very lucky.

So here's a tip o’ the hat and a glass lifted to my brothers (not to mention sisters—my wife, like yours, is also a veteran) in arms who put their lives on the line for the things we all believe in. I am honored to be your friend and colleague.


"We sleep soundly in our beds b
ecause rough men stand ready in the night to visit violence on those who would do us harm."

Whether it's a soldier overseas or a cop on the beat, "rough men" (and women) are those who stand guard protecting us. The ones who are called upon to be their best under the worst circumstances.

RT thank you for your service both as a soldier and back at home in law enforcement.

Good piece, R.T. and thank you for your service. I didn't write yesterday because I wanted to check this out before I mentioned it. Some independent authors have a special deal going on for Veteran's Day: leave a comment on their site and you get a free e-book and they send one to a soldier. http://indiebookcollective.wordpress.com/2011/11/11/blog-tour-de-troops-veterans-day-day-1/

Well said buddy. It has been quite a journey. Here's a toast to our service And a heartfelt salute to Tom and David. It has been 40 some years but I still miss them. Guess it is up to us to keep their memory alive.
Deacon