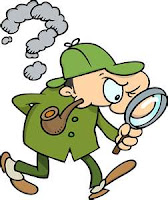 
Attempting to combine the subject of this column with a Thanksgiving theme, I tried to find a metaphorical image of a turkey’s thoughts about Thanksgiving but I couldn’t find exactly what I had in mind. The image I had in mind shows a large tom turkey in the foreground holding a rifle across his chest. In the background are several turkeys gobbling in an angry mood. The caption reads: “No More Turkey Funerals.” 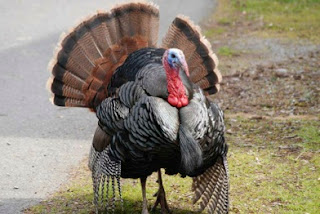 (Image courtesy of  Steve Voght )
Like the symbol hunter, I’ve been hunting metaphors. The idea of writing about metaphors has been circulating in my mind since I read Dixon’s column on props. Metaphors are props that ignite the senses which, combined with the imagination, enables the reader to experience viscerally the sensation the writer is trying to convey.

Although we often apply the term metaphor to all figures of speech, the figure writers use most often is In fact that workhorse of the figures of speech, the simile. For my own clarification of the difference between metaphor and simile I consulted a source I have been reluctant to use: the WIKIPEDIA FREE ENCYCLOPEDIA (why my reluctance to use it might be subject of another column).
From the Wikipedia: “A metaphor is a literary figure of speech that uses an image, story or tangible thing to represent a less tangible thing or some intangible quality or idea; e.g., ‘Her eyes were glistening jewels.’ Metaphor may also be used for any rhetorical figures of speech that achieve their effects via association, comparison or resemblance. In this broader sense, antithesis, hyperbole, metonymy and simile would all be considered types of metaphor.”

“A simile is a figure of speech that directly compares two different things, usually by employing the words ‘like’, ‘as’. Even though both similes and metaphors are forms of comparison, similes indirectly compare the two ideas and allow them to remain distinct in spite of their similarities, whereas metaphors compare two things directly.“

A good simile forces me to suspend my right brain and allow my left brain to take over (I think I got correct which side of the brain controls imagination and which rationality).

Erick G. Benson in his novel Framed Justice describes how rapidly Monday morning greets his detective Tiger Price“: …as swiftly as a bullet exiting the barrel of a rifle.” I imagine Tiger waking suddenly with the morning sun in his eyes, expecting to have a productive day, which he does.
Austin S. Camacho uses a sun smilie in his debut novel Collateral Damage to describe the look the private detective sees on his girlfriend’s face: “When she opened the door he saw the expectant look lift from her face like a mist when the sun hits the land.” The disappearing mist reveals the smiling face of happiness.

Leigh in his short story “Untenable” in Pages of Stories suggests that the Nina character may be a dangerous person when he describes her look “as cold, dark, and tart as the witches brew” and continues the simile with “Her glare turned icier.”

In his short story “Detour” (EQMM July 2011), Neil Schofield made me think of why I hated the 30 plus pigeons that at one time occupied the roof of my house. Questioning by the police makes his unnamed protagonist feel “like being pecked to death by a thousand pigeons.

In David Dean’s short story “Tap-Tap” (EQMM  March/April 2011), the protagonist, sitting at his computer staring out the office window into the street through the cold, steady rain, sees “cars planing past like water-skiers”, and I see my car fishtailing into a ditch on black ice.

The narrator in the early Edward D. Hoch horrifying story “What’s It All About?” (EQMM December 2011) describes Friday night in a Florida city as “alive, with blood of the city throbbing in its veins…” . The description reminded me of Friday nights in downtown Las Vegas when I lived there in the late 1960s.