Being a bestseller is *sick*

The good news: Stockholm Syndrome hit the bestseller list on Kobo less than two weeks after its debut. 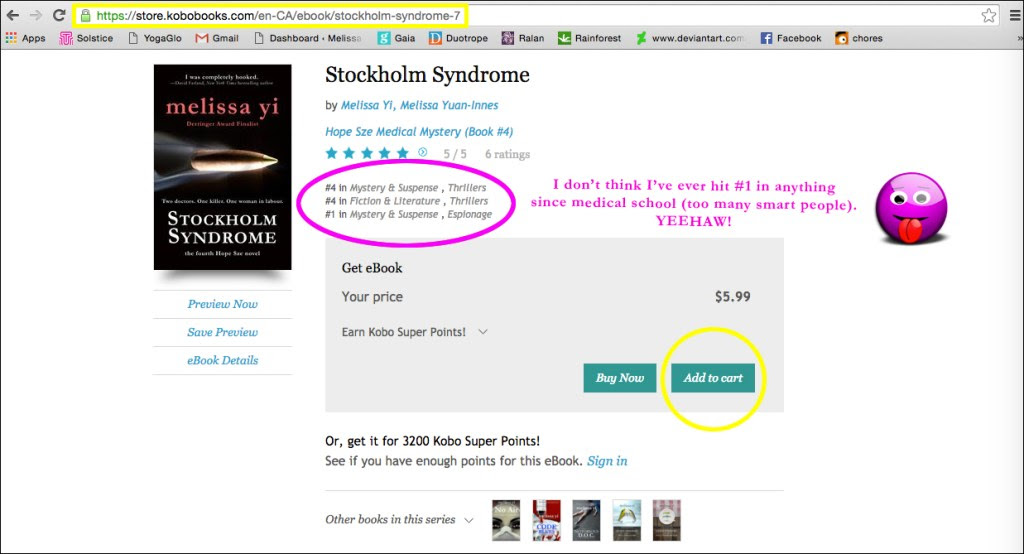 The bad news: I was willing to grind myself to powder to get there.
Most people hit the brakes before they get to either point. They’re smarter than me.
Me? TL; DR: I got the flu, then pneumonia, then side effects from medications that landed me in the ER as a patient for two nights with palpitations while raving on dexamethasone. My colleagues were worried about me. And I’m still heading back to the hospital for another work-up today.
Meanwhile, I was still trying to do it all. So far this year, I hit Utah, Oregon, New York (twice), Los Angeles, Boston, Kingston, Ottawa, and Montreal. Drive to Boston solo with my kids? Sure. Make a two-layer homemade birthday cake for my daughter’s fifth birthday party? Of course. Stay at an acting class in Montreal despite getting assaulted with the flu? No problem. 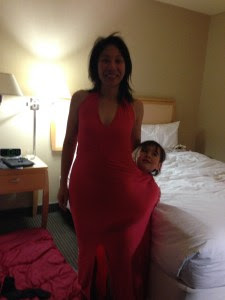 Us wrapped in Rush Couture 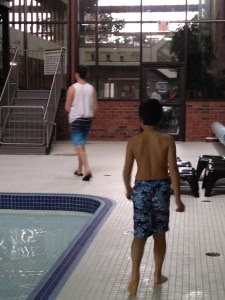 Max in Kingston
<–I bought this dress when I was pregnant with Anastasia, and now she can get inside it with me because it has peek-a-book cutouts on the sides. It’s from Rush Couture. This dress is popular on Facebook.
It looked weird on me when I was pregnant. Here it looks normal.

BTW, at one of my Stockholm Syndrome book launches, one woman told me I had love handles. “Or maybe it’s your shirt.” As an author, I tell you, NEVER say mean things to a writer at a book launch.
Natalie Goldberg always brings someone who tells her she’s beautiful. Doesn’t matter if she messed up. Tell her she rocked it hard. As a fashionista and a physician, I present this dress as evidence that I did not detect love handles. If I had love handles, I would not choose to wear a peek-a-boo dress. QED.
I was doing it “all.” Except I ended up so sick, I couldn’t work the ER any more. I had to ask for help. And one of my colleagues started lecturing me how much I was burdening the group, and I’d better not take more than a week off.
I started yelling at that doctor. Which made him worry about my mental health. Which is a whole other worm-can.
In truth, I am not the best doctor right now. Not only on December 7-8th, when I was high on dexamethasone and short of breath with palpitations of up to 200 (my husband was upset that I couldn’t figure out how to dial the phone. In my defence, it was a new phone, and I was more interested in getting my clothes together for my scheduled appearance on Rogers TV the next morning). That night, the doctor kept telling me I shouldn’t go on TV. I was like, “I’m supposed to be on TV! That’s why I took the dex at night, to heal my vocal cords enough to sing! I’ll take the train if you really want, but geez. I also have a recording for CBC’s White Coat Black Art scheduled for the afternoon.” I was all set, even though I couldn’t find the Imovane they’d just given me to sleep, but RN Rebecca stopped me. She said, “You look pale. And sick.”
Suddenly, I was shocked into cancelling. I can’t be ugly on TV. That would be bad. It was like, if you want to get young women to quit smoking, you can try and reason with them about how it’s expensive, and selling out to the man, and giving you lung cancer and emphysema, but the real money is in telling them they’ll get wrinkles. No way!
I knew I needed to sleep. My husband was mad at me for getting up in the middle of the night and working. I knew, logically, I’d never get better that way. And yet I couldn’t stop.
I tried to work with the flu until I was seeing double and forgetting to order chest X-rays, and the other doctor sent me home. Then I made myself pick up my Stockholm Syndrome books and ended up dehydrated and nearly delirious when they detained me at the border for 1.5 hours (hint: if the government sends you the wrong business number, you’re screwed. If the border guards are chasing after illegal cigarettes and the remaining guard has no clue what to do with you, you’re screwed). Even yesterday, when my friends and colleagues are like, “Are you much better now?”, I’d have to say that not only did it seem like my pneumonia came back with a vengeance after we stopped all antibiotics for a few days, but I’m not completely compos mentis–at the children’s Christmas party, I answered a page from the neurologist and forgot my purse on a bench in the hallway. RN Annie was too tactful to say anything, but I knew she’d noticed I wasn’t right.
The good news is, I managed to get to Ottawa to record an interview with Fresh Air’s Mary Ito, and it was pretty cool. You can listen to it here: https://soundcloud.com/cbc-fresh-air/final-melissa-yuan-innes-6287325-2015-12-12t04-21-11000. They’ll keep it up for two weeks. 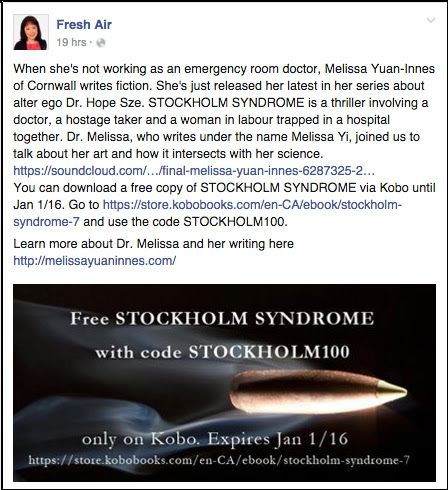 I was able to put a good game face on for the 3 h drive and the recording, although I did lose my parking pass immediately. 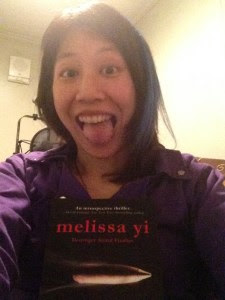 I was taking selfies in the booth. Scared the heck out of the next group coming in to record.

I hadn’t checked Kobo recently–too nervous that I sucked, especially since they hadn’t mentioned the free code during the interview–but I nerved up and did it. And guess what I saw? 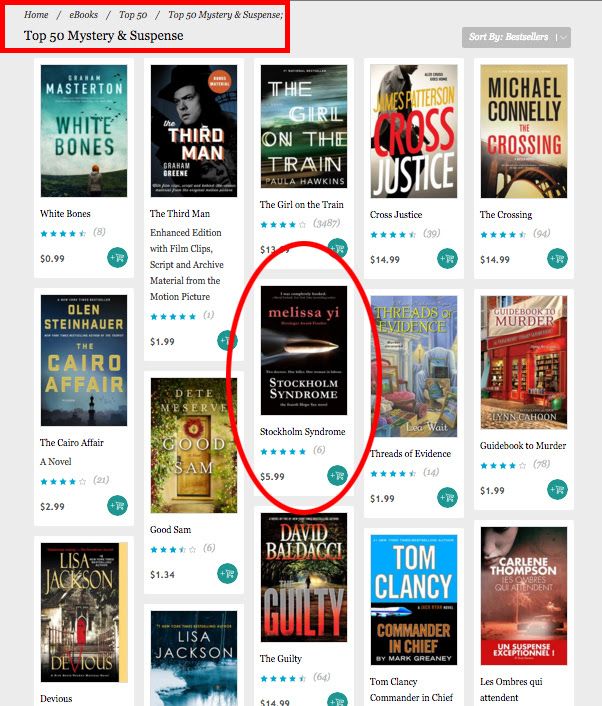 #8 in mystery overall. Not just #4 in thrillers. All of mystery and suspense, people. Maybe you’ve heard of Tom Clancy or Lisa Jackson? Or James Patterson?
But, greedy Gus that I am, I wondered how I was doing overall. I was euphoric when Mark Leslie Lefebvre told me Terminally Ill (Hope Sze #3) had broken Kobos’ Top 50 after my interview with Wei Chen on CBC’s Ontario Morning. Terminally Ill ended up hitting as high as #27 for all of Kobo’s books. Not segmented by genre. Every. Single. Book. On. Kobo.
Could Stockholm Syndrome repeat the magic? Even if Fresh Air hadn’t given out the time-limited magic Kobo code of STOCKHOLM100 during the interview, only on Facebook and Twitter? 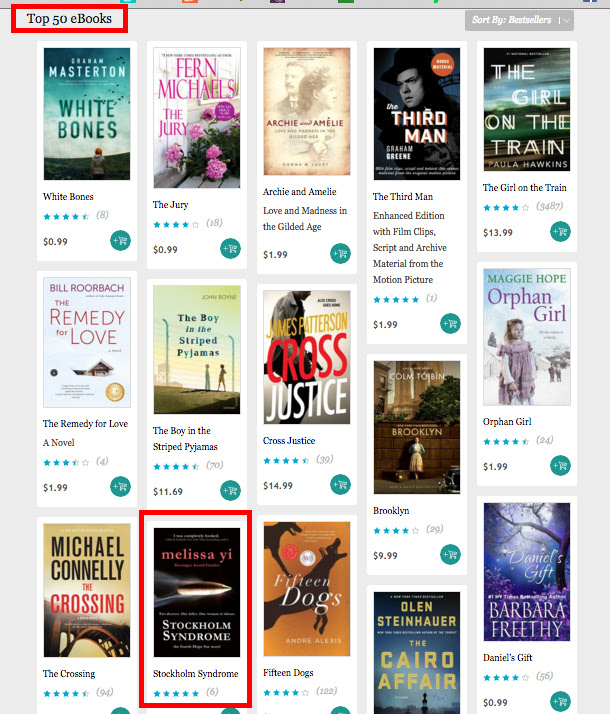 NUMBER TWELVE, PEOPLE. That’s better than Terminally Ill.
I was freaking out, didn’t sleep (again), high-fiving Max.
OMG. Look at it. Fifteen Dogs just won the Giller Prize. Mary Ito interviewed Andre Alexis, too. NFW.
Should I not tell you about the bad stuff? Probably. But for those of you who already know my protagonist, Dr. Hope Sze, we’re pathologically honest. I could pretend to be perfect, but I’m no good at lying. So here you go.
In other words, it’s the best of times, it’s the worst of times. And I’m my own worst enemy. But mostly the best, because my husband, my friends, and my colleagues are rallying around me. And because I feel like telling near-strangers, I love you.
Because I do. Because we’re alive. Including me, despite myself.
Take care of yourselves. I care about you.
Love,
Melissa
“Each patient carries his own doctor inside him.”
― Norman Cousins, Anatomy of an Illness
“A person is, among all else, a material thing, easily torn and not easily mended.”
― Ian McEwan, Atonement
“The loner who looks fabulous is one of the most vulnerable loners of all.”
― Anneli Rufus, Party of One: The Loners’ Manifesto
“The need for change bulldozed a road down the centre of my mind.” —Maya Angelou
“I can paint a barn with someone else’s blood. I just can’t stand to see my own.”―Colonel Henry Blake, a surgeon on M*A*S*H Episode Guide Team, M*A*S*H EPISODE GUIDE: Details All 251 Episodes with Plot Summaries. Searchable. Companion to DVDs Blu Ray and Box Set.
“Some people should not be allowed to see beyond your surface. Seeing your vulnerability is a privilege, not meant for everyone.” ― Yasmin Mogahed
“Being an open and vulnerable doesn’t mean you are weak..” ― Jayesh Varma
“A heart that can break is better than no heart at all.” ―Marty Rubin
“There is more hope in honest brokenness than in the pretense of false wholeness.”
― Jamie Arpin-Ricci, Vulnerable Faith: Missional Living in the Radical Way of St. Patrick
People who cannot find time for recreation are obliged sooner or later to find time for illness.
People that go through serious illness – you can either go one way or the other. You can either become despondent about it all. Or it kind of rejuvenates you, makes you focus on what’s important.~Jack Layton
Posted by Melissa Yi at 00:00 3 comments