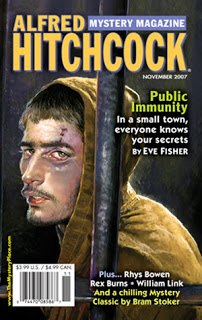 On September 10th, Sleuthsayer Eve Fisher described her story “Presumed Guilty,” published in Alfred Hitchcock’s Mystery Magazine. Detective that I am, I deduced that it was the cover story.

I thought, Hmm. Not only have I never cracked the pages of AHMM, I’ve only received one slightly personalized rejection to date. Usually it’s just a straight bounce.

I could’ve gotten envious of Eve. Seethed about Eve. In fact, years ago, I might have done exactly that.

At my book club last month, we did a round table and each picked which deadly sin personified us. I chose both anger and envy. I’m also an enormous glutton—people are always astonished how much I eat and ask where I pack it away—but I don’t feel guilty about loving food. I have, however, blown up at people and swallowed a lot of bile and worked hard to change both these traits.

I bring this up for two reasons. I think writers are particularly susceptible to envy because there’s no clear path, so it feels like everyone else is always getting ahead.

“[A] woman with three poems in [Poetry Magazine] had been born two years after me, which was enough to ruin my day—and I didn’t even desire to write poetry. The notion of people my age or younger having written books, some of them quite good books, was more than upsetting. I did not precisely want them to die, but, wondering why they hadn’t the simple courtesy to allow my achievements to be recognized first, I wanted them, somehow, stopped. The moral of this little story, I believe, is that it is difficult to be ambitious without also being envious.”—Joseph Epstin, Envy

Edgar-nominated writer Kris Rusch/Nelscott told me, "In writing, there is no hierarchy, which is really strange.  It's the only profession I know where we don't compete against each other. We compete against ourselves--trying to outdo ourselves.  That's because each writers' career is different.  No one career is the same as another.  So we're always comparing apples and broccoli."

Still, when Kris asked for suggestions about topics for her Freelancer’s Survival Guide, I asked her to write about jealousy. She initially said no. But eventually she did write about it, and it was so popular that it became a two-part article.

“First, let me be clear about the reasons I initially declined to cover this topic.  I think jealousy is one of the most destructive emotions in the world.  I think you can attribute more horrible things to jealousy than you can to most other emotions, including anger. I see nothing positive about jealousy. I’ve watched it ruin friendships, marriages, and professional relationships. I’ve watched it destroy careers.  I know of cases where jealousy has led to actual physical harm, including murder.” http://kriswrites.com/2010/01/14/freelancers-survival-guide-professional-jealousy/

To my surprise, the follow-up article was called “Surviving Other People’s Jealousy.”
I don’t think I ever harmed anyone, just gnashed my teeth a bit. And no one had envied me, as far as I knew, since I was such a newbie.

I needed more advice. Luckily, bestselling author Jennifer Crusie had me in mind for this: http://jennycrusie.com/for-writers/essays/green-is-not-your-color-professional-jealousy-and-the-professional-writer/

You’re human…Wallow in it...For five minutes. That’s all you get, five minutes to be seethingly, teeth-achingly bitter.
Then think about what the person did to get what she got….
Then take that analysis of what she did and see if you can apply it to your career. Whatever it was that she did, it obviously worked.

I noticed a common recipe for success: hard work. I could do that.

Jennifer Crusie again:
Bette Midler said, “The hardest thing about being successful is finding somebody to be happy for you.” The one thing that I have noticed about all the successful people I know is that their circle of friends gets smaller and smaller…..

Well, that’s no good.
While I threw myself into writing, mostly toiling in isolation but occasionally selling a story, I slowly, slowly relinquished my grip on envy and admired my writing friends.

That was a relief. I even wrote a book about it, Apples, Broccoli & Rats with Islands: Short thoughts on envy and positivity for writers (and human beings in general).

Here’s one Cinderella ending. My name appears in the latest AHMM. No, I didn’t get to write the cover story. But Ken Wishnia’s Trace Evidence guest editorial appears on the cover, and the entire third paragraph describes my appearance in Jewish Noir:

And thanks to our generous “You don’t have to be Jewish to write Jewish Noir” policy, I also got to collaborate with writers like Canadian author Melissa Yi, who was a joy to work with. She sent me two stories for consideration, and I ended up replying with a carefully worded email explaining that I liked the first half of the first story and the second half of the second story, and asked if she would be willing to combine the two stories along these lines to create a totally new story. That’s asking a lot, but not only was she willing to do it, after revising the two stories into one, she ended up adding a new section that gave her story “Blood Diamonds” a crack-of-the-whip sting of an ending that will linger in your mind for long after you’ve read it.

May we all live and write happily ever after.