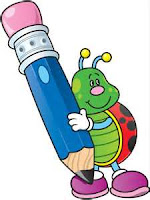 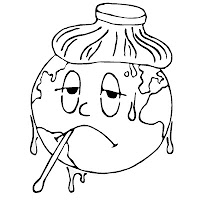 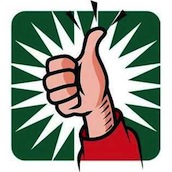 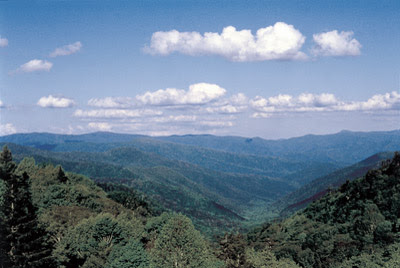 A few weeks ago our family--my wife and I, our three children, and their spouses and children--spent a week in the mountains of east Tennessee.  Thirteen of us, five of whom are under the age of seven, lived together for six days in a four-story, six-bedroom cabin, and somehow managed to do it without any major arguments or threats to life and limb.  I can't say we were roughing it, because the place included a pool table, hot tub, Wi-Fi, and seven TV sets--but, to our credit, none of the TVs even got switched on, except for the night our oldest son plugged his camera into one of them to show us a movie he'd made of a kindergarten music-program featuring one of his kids.

Anyhow, we had a great time; the weather was cool and clear and totally unsummerlike for the whole trip.  Every day after breakfast, the Floyd clan hiked up and down mountains until two of us (guess who) were wheezing and had our tongues hanging out.  Lunch was always a picnic somewhere along the trail, and by five o'clock or so we were usually back at the cabin, where we had a group supper and got all the kiddos calmed down and in bed.  The eight grownups then sat around on the deck and snacked and propped up our sore feet and visited until the wee hours.

But my column today, believe it or not, isn't about road trips or backpacking or family reunions.  It's about writing.  Because on the first of those six days in the wild, I was recovering but still suffering from a head cold and chose to stay behind while the rest of the family packed up and trudged off into the black forest.  From eight o'clock until around four-thirty that day, I sat around by myself, taking it easy and occasionally taking in the view.  And writing.

I wrote for most of the day, and while I wish I could tell you I was writing a SleuthSayer column, I wasn't.  I was writing a short story--what used to be called a mini-mystery and is now called a "solve-it-yourself" mystery--for a magazine called Woman's World.

I was surprised at how smoothly it went.  Part of it was the quiet and the solitude, I guess, and the knowledge that there really wasn't anything else to do while the rest of my crew were off someplace having a good time.  Whatever the reason, the ideas and the words seemed to appear in my stuffy head without much effort at all.  It did, however, take some effort to make them appear in tangible form, since I was using an ink pen and a yellow legal pad I had thrown into my briefcase for the trip.  (My iPad worked well for e-mail and websurfing but I had not yet--and still have not--installed a word-processing program on it.)  I do actually remember how to write words by hand, though, and within half an hour I had jotted down a rough draft on the first four sheets of my lined pad.

The rewriting was the only thing that was hard.  I do a lot of rewriting, and always have, but I'm a bit spoiled; after all, editing my own work on a computer screen is easy.  On paper it's not.  I did a few markouts and additions and other corrections on the sheets I'd already written, but most of my revisions were accomplished by starting over and writing a complete second draft, and then a third.  And since these WW submissions must have a short and very specific wordcount, I even wound up (don't laugh) counting the words each time, right down to every "a" and "the."  Which can be a tiresome job, and a reminder of how things "used to be."

When I was done I had filled a dozen pages, the first eight of which, of course, were now worthless.  The last four pages contained the almost-final draft of my handwritten story.

By then it was past lunchtime, so I gobbled down whatever food I could find in our Ponderosa-sized kitchen, caught a nap, and then took my better-(I hoped)-but-not-yet-completed story out onto the third-floor deck to read it over. I have always--even during my college and Air Force days--been able to do some of my best thinking when my feet are elevated to at least the level of my head, and one of the adjustable lounge chairs was just right for this phase of my creative process.  By the time my weary and sweaty kinfolks had returned from their day's adventures, I had made all my final edits and had a story in hand that now was . . . well, I won't say perfect--but was as perfect as I thought that particular story could be.  I had a product that was ready to be taken home, typed, and submitted to the WW fiction editor.

Every day after that, I hiked through hill and dale with the rest of the family; my cold was better and my story was finished and safely packed away.  When we wrapped up the week and had driven the five hundred miles back to our house in Mississippi I did indeed send that story off into the world to try to make something of itself.  I haven't yet heard anything back about it, so I don't know if it'll prove to be a winner or a loser, but at least I'm satisfied with it.

I've completed several more stories since then, but all of those have been written right here in this chair in my home office, using my trusty iMac.  My future plans include installing the Apple version of MS Word on my iPad, but until then, on any trip I take, I plan to again pack plenty of paper and a few Foray rollerball pens.  Just in case I find myself grounded for a while.

Call it a wilderness survival kit.