Working for The Woman

A few weeks back, I went to the mailbox with my usual expectations of both hope and dread. The writer's hope of good news, such as a contract or something of interest from the world of writing. But then, there's also the dread of receiving a very unnecessary rejection of one's most excellent creation. Of course, the box could contain nothing more than junk mail and bills. Those, I give to my wife, Kiti.

On this day, nestled in with the utilities bill, an offer of a free steak dinner if we listened to a lecture on how to invest our money in a retirement fund, two health insurance companies who desperately wanted my future business, plus several discount coupons from various stores offering to save me some money, was a single, plain white, #10 business envelope with one of my address labels on it. No return address. The postmark was Seattle.

I quickly recognized this envelope as the SASE I had enclosed with a mini-mystery manuscript submitted to Woman's World Magazine. In the more distant past, such an envelope would contain two pieces of paper. They would either be a form rejection letter and the first page of the rejected manuscript, OR they would be a very nice congratulatory letter of acceptance and a one-page contract stating when this story was to be published and the $500 fee the author was to receive in a few weeks.
HOWEVER, last year in reply to my 24th submission, I had received an e-mail from Johnene Granger, the column editor, stating that she needed an electronic copy of my manuscript because the head editor wanted to be able to look at a mock-up of the proposed magazine issue on screen before he made his final decisions. Thus, an e-mail request meant the column editor liked the story and there was only one more hurdle to pass. A follow-up e-mail would then provide info on acceptance or rejection, and the contract still came in one's SASE.

Advance notice on what to expect in the snail mail. I could live with that, after all that's how they bought my 24th submission in 2011. Problem now was here I stood holding the return envelope on my 25th submission and there had been no advance e-mail from Seattle. CRAP!

My questioning fingertips felt the envelope. Yep, it was the usual two pages thick. Same as always. And, you can't tell a one-page contract from the first page of a rejected manuscript.

Should I pour a Jack and Coke before opening, or just tear into the envelope and pour the drink later? Maybe pry up one corner of the seal and sneak a peek? Nah, be a man and take it on the chin. All or nothing. It's not the end of the world.

Sonofagun, it's a contract and a congratulatory letter of acceptance. A hand-written personal note at the bottom of the letter says, "Thanks for another good one, Johnene Granger." 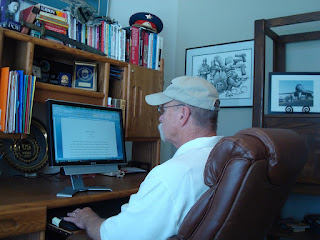 Whatever happened to the advance e-mail notice program and the mock-up on screen for the head editor before accetance? At this point I don't really care. The Woman has just accepted my 25th submission. Let's see, that makes 10 acceptances and 15 rejections. A whopping 40% goes to the plus side for that market. My average is improving. It's another writing credit, which you the reading public can run right out to your local grocery store and find "Officer, It Was Self-Defense" in Woman's World Magazine, issue #31 with an on-sale date of July 19th. Hey, that was yesterday. Better hurry, that issue is only on the racks for one week. (Actually, Dix had a last minute uploading problem, plus his Dad was having eye surgery, and he flat ran out of time. Therefore, we swapped weeks and  this is early, so don't look for that magazine until next week.)

Moving on. Tune in next time when I go over some personal notes about writing those 700 words or less, $500 mini-mysteries. But right now, you'll have to excuse me, I have to go back to working for The Woman.
Posted by R.T. Lawton at 00:01 8 comments

Email ThisBlogThis!Share to TwitterShare to FacebookShare to Pinterest
Links to this post
Labels: R.T. Lawton, Working for The Woman
Older Posts Home
Subscribe to: Posts (Atom)