“The sharp edge of a razor is difficult to pass over; thus the wise say the path to Salvation is hard."
–The Katha-Upanishad and from The Razor’s Edge by Somerset Maugham

On the 11th Hour of the 11th Day of the 11th Month, the Guns of August Fell Silent. November 11th was originally Armistice Day, the day World War I ended. It became Veterans Day in 1954.

Several weeks ago, on September 8th, I did a piece on this blog called Noir and the Returning War Vet Sub-Genre (http://www.sleuthsayers.org/2015/09/noir-and-returning-war-vet-sub-genre.html ). At the time I didn’t know my November post would fall on the day before Veteran’s Day. It would have been a good post for today, but since it’s a done deal, I’ll take a different tack this time.

And on October 29th, Brian Thornton did a post on what it means to be a veteran. I don’t think I could say it any better—I don’t think anyone has. You can find it here: http://www.sleuthsayers.org/2015/10/being-veteran.html . 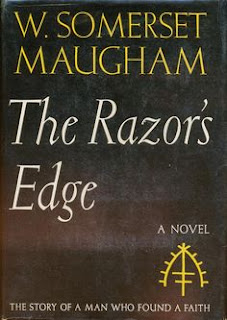 I thought about making a list of books and movies that deal with veterans and there is a brief list at the end of this piece. But instead, I think I’ll talk a bit about one book that deals with a veteran that’s also been made into a movie twice over: The Razor’s Edge, by Somerset Maugham.

This book is tied for my favorite book of all time with The Count of Monte Cristo. Monte Cristo strikes a chord with me because it’s the ultimate revenge story and revenge is a form of justice (at least in some cases) and I like justice. But we’ll leave the Count aside for now.

The Razor’s Edge is the story of Larry Darrell, a World War I veteran who returns from the war a changed man, as most people do. He no longer accepts the shallow and superficial values of his friends. Instead, he goes on a search for a deeper and more transcendent meaning in life. To that end, he gives up the love of his life when she refuses to change or accept him as he’s become after the war.

I related to this book on many levels and in some senses it changed my life, making me see things differently, though I won’t go into all of that here.

The first film version, from 1945, starred Tyrone Power as Larry Darrell, Gene Tierney as Isabel Bradley and the terrific Clifton Webb as Elliot Templeton. The other version, from 1984, starred Bill Murray. Of the two I’d have to say I like the earlier version better. It’s my understanding that Murray wanted to do the part and wouldn’t do Ghostbusters II unless the studio let him do The Razor’s Edge, though I’m not sure if the story is true. But either way, I just don’t think I see Murray in the part, he didn’t have the right demeanor, for me anyway.

And just in writing this article, I realized something I hadn’t realized before. The character of Zach Tanner in my new novella Vortex has a lot in common with Larry Darrell, though Zach doesn’t go on a mission to find transcendent meaning in the world, he does come back from the war in Afghanistan a changed man and this creates the conflict in the book. And the character of Jessie, his girlfriend, has much in common with Isabel; they’re both looking for superficial material happiness. I didn’t do this on purpose, but it shows how much The Razor’s Edge is with me on a subconscious level and how much a book or movie can affect someone, even years and decades after we’ve read or seen it.

And now back to the main issue of this blog post, Veteran’s Day. Here are a handful of movies about veterans that I like. There are others, of course, but here are a few that come to mind:

***
And here is a salute to the men and women of the armed forces:


And the Marine Corps Silent Drill Team, which always fascinates me:


And one more thing, a couple of lists of places where Veterans can get discounts on Veterans Day: 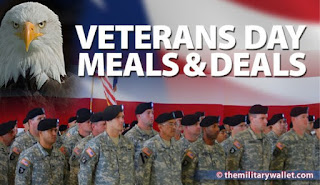 Vortex is on sale in e-form at all the usual places.

And there’s Goodreads Giveaway for Coast to Coast: Murder from Sea to Shining Sea running for a few more days. Maybe win a FREE copy. https://www.goodreads.com/giveaway/show/161413-coast-to-coast-murder-from-sea-to-shining-sea 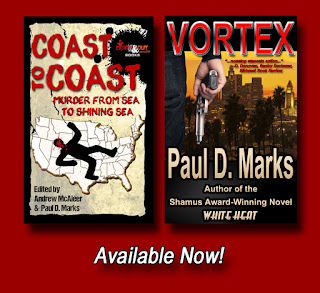