I've Got the Rhythm In Me

Hell is freezing over. Anyone who knows me even slightly well will certainly think so when they realize that this week I am writing about .... yes, it's true ... sports.

I've never been into most sports. I don't like playing them. Or watching them. I've never had good hand-eye coordination, and every time a game comes on, I'm always itching to open a book.

But there are some exceptions. I like watching figure skating. (The beauty of the skaters gliding on the ice, combined with making flips and jumps and landing them with lightning precision--wow.) 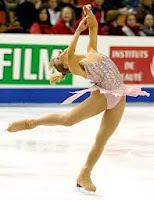 And I'm a big fan of gymnastics too. Who doesn't remember Kerri Strug during the 1996 summer games, running on an injured ankle and vaulting herself and her USA teammates into Olympic gold?

There's one sport that mixes the beauty and athleticism of both skating and tumbling, and it has become a favorite of mine. Rhythmic gymnastics. And it's coming to a TV (or computer or other high-tech device) near you in just a few weeks, courtesy of the summer Olympics.

Never heard of rhythmic gymnastics? Maybe you've heard of it by its alternate name, something I've heard people sneer at: ribbon dancing. The entire sport was trolled during the last summer Olympics, with people declaring it's not a sport, that it's just dancing on a carpet with ribbons. The sport has been trolled so much that if you go to Team USA's website, they have a whole page explaining the athleticism involved in this sport. And yes, it is a sport. A beautiful one.


So what is it, for those who don't know? Picture a gymnast doing a tumbling routine, but at the same time, she has to keep a ribbon, hoop, ball, club, or rope constantly moving. The athletes perhaps are too good, making their routines look easy, which has encouraged

some people to declare rhythmic gymnastics to not be a sport. But these routines require skill and endurance, beauty and passion--sure sounds like a sport to me.

Not convinced? Check out Team USA's Laura Zeng compete with a ball during the 2015 World Rhythmic Gymnastics championships.

So I'm excited for the rhythmic gymnastics portion of this summer's Olympics. The competition is scheduled near the end of the games, August 19 - 21st. Want to learn more in advance? NBC has some information about this year's USA team on their website. Click here to check it out.

If you've ever participated in rhythmic gymnastics, I'd love to hear from you in the comments. What's it really like? How hard it is to learn to do? Please share for those of us who love this sport. And for everyone else, what's your favorite part of the Olympics?