Noir at the Opportunity Bar


by Michael Bracken
In late March 2003 I lost my job. Well, I didn’t actually lose it, to steal a Bobcat Goldthwait joke, I knew exactly where it was, but when I went back there, someone else was doing it. Within a week, I was offered, and I accepted, a freelance editing gig that provided me with an income foundation sufficient to jumpstart my third attempt at full-time freelancing.

In January 2018, a few months shy of 15 years together, that client and I parted ways. Our parting was amicable, leaving open the possibility of working together again in the future, but the immediate impact was an income loss exceeding $13,000/year.

Losing that client also freed up 10-plus work hours each week, and I’ve been surprised at how many opportunities have arisen since January, most of them related to writing crime fiction, and many of them opportunities I might have turned down for lack of time had they come only a few months earlier.

One of them was an invitation to participate in Noir at the Bar Dallas on April 18.

Michael Pool—novelist, short story writer, and editor/publisher of the recently deceased Crime Syndicate Magazine—extended the invitation, and accepting meant nearly 10 hours away from home and an unknown amount of time prepping for the event.

Of course, I accepted.

The other readings—all half-hour solo acts—drew audiences of one, two, and half-a-dozen.

I chose to read “Texas Sundown” from Down & Out: The Magazine #3, an 1,800-word noir story written in first person. The first time I read the story aloud it fit within the seven-to-nine minutes authors were expected to fill. During each subsequent read-through, though, the story grew longer and longer, until I realized I had stopped rushing through it and was adding dramatic pauses.

To wrangle the story back into my allotted time, Temple helped me excise words, phrases, and entire sentences that read well on the page but which were unnecessary when the story was read aloud.

Temple and I left home early, knowing a less-than-two-hour trip would likely take far longer given traffic on IH35. Sure enough, we encountered near standstill traffic as we neared Dallas. We exited the highway, navigated side streets, and arrived a few minutes early for our 5:30 dinner reservation at Smoke. 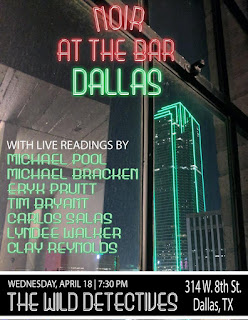 After a leisurely dinner, we made our way to The Wild Detectives, where Noir at the Bar Dallas was scheduled to begin at 7:30 p.m. The Wild Detectives is an older home in the Oak Cliff neighborhood converted into a bookstore/bar, with an eclectic selection of reading material and seating both inside and outside.

Temple and I arrived early. We claimed one end of a picnic table near the outside stage in what had been the home’s backyard, and I goofed around onstage before any other presenters arrived. Soon, Temple’s daughter Emily, who knows I’m a writer but who had never read any of my work, joined us, as did the other presenters, their families, their friends, and audience members attracted to the event.

Texas weather is quite fickle, often inappropriate for outside events where sweating is discouraged. That evening, it was perfect: dry, cool, and comfortable, an uncommon combination. The backyard was packed, the audience was appreciative, and all of the authors brought their A game.

Michael Pool was both the host and a presenter for the evening. Tim Bryant, Eryk Pruitt, Clay Reynolds, Carlos Salas, LynDee Walker, and I were presenters. The first three authors read their work while the sun was dipping low in the sky. After a break, and after the sun had set, the last four authors read. Background sounds throughout the evening included sirens of all kinds—appropriate for a reading by crime fiction writers—and in the alley behind the fence blue lights flashed as if a patrol car or emergency vehicle had parked back there. Afterward, we talked with each other and with audience members.

Unlike some of the authors, I brought nothing with me to sell because I don’t usually tote books around. I did have and did distribute a flyer prepared by Lance Wright at Down & Out Books that promoted, on the top half, Coast to Coast: Private Eyes From Sea to Shining Sea, Passport to Murder, and Down & Out: The Magazine #3, all of which contain my short stories. The bottom half of the flyer was devoted to Michael Pool’s first novel, Texas Two-Step.

Will I participate in another Noir at the Bar if invited? Absolutely!

I met several writers new to me, heard great stories and poetry presented in an entertaining fashion, and learned that I can—with appropriate practice—read in public without embarrassing myself.

Did I have to lose a major client in order to participate? Probably not, but it would have been much more difficult to take advantage of this opportunity—and the many others that have recently come my way—if I had to shoehorn it into an already packed schedule.

Being a freelancer means learning to balance opportunity and revenue in a meaningful way. Sometimes the work we most enjoy is the least remunerative.

Seeking nothing but dollar signs can have us no better off than we were as wage slaves, doing work we don’t enjoy just to put bread on the table. Doing only the things we enjoy, however, can mean having no bread on the table at all.

I’ve been lucky. I like my clients and I enjoy most of what I do, but I’m even more enjoying some things—such as Noir at the Bar Dallas—I’ve been able to do with the extra 10 hours I have each week.

(And don’t cry for me. Nearly half the lost income has already been replaced thanks to existing clients.)

Richard Krauss interviewed me for the June 2018 issue of The Digest Enthusiast. The wide-ranging interview fills 17 pages, reveals my pseudonyms, and touches on work written in a variety of genres. And, yes, that's me on the cover.