by David Dean
Flannery O'Connor once wrote a story titled, "Everything That Rises Must Converge".  Like most of her work it's brilliant.  The title alone I found remarkable and has always stuck in my mind.  There was something about those words.  The truth be told, even after reading the story, I still didn't understand the phrase; the choice of the title.  Generally happy in my ignorance, I was content to coast along for many, many years with only the occasional thought about it.  But still it bothered me--those words kept returning.
Georgia has been fortunate to have produced a number of notable writers, many of whom, most I would say, having been female.  First there's Margaret Mitchell of course, there's no getting around her.  You are not allowed to graduate high school in Georgia without at least knowing who wrote "Gone With The Wind".  That question is also included in college entry exams as per state law.  Carson McCullers, the most notable writer my hometown ever produced wrote "The Heart Is A Lonely Hunter", "Ballad Of The Sad Café", "Member Of The Wedding", and a number of other great novels.  Of the male persuasion there is Erskine Caldwell, who penned "Tobacco Road" and "God's Little Acre" amongst others.  And of more recent note, James Dickey, of "Deliverance" fame.  All of them formidable talents. 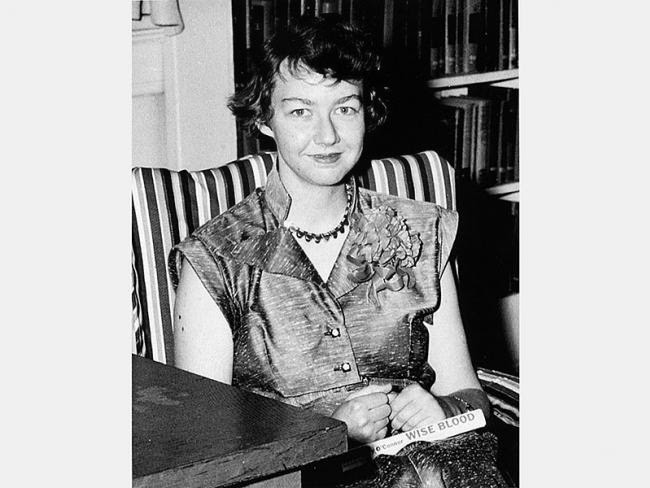 Flannery made her reputation during the 1950's and 60's predominantly with short stories.  She is one of the reasons that I learned to love them.  Afflicted by lupus, she lived a brief life, succumbing to the disease at 39 and after spending many of those years on a small farm near Milledgeville--notable for being the home of the state's largest psychiatric institution.  She never married, and beyond the occasional lecture at a nearby women's college, lived quietly and obscurely.  Though she certainly achieved a great deal of critical recognition during her lifetime, neither of her two novels became best-sellers.  I like to think she wouldn't have cared.

Like Margaret Mitchell's fictional heroine, Scarlett O'Hara, Ms. O'Connor was a Catholic and of Irish descent.  The more astute of you may have intuited this last from her name.  Also like Scarlett, she was born in the beautiful city of Savannah.  I have stood outside her family's townhouse, but was unable to go inside as it was not open to the public.  Which was a shame.  Beyond these things, Scarlett and Flannery could hardly have been more different.  I doubt Flannery would ever have said, "Fiddle-de-dee!"  I could be wrong.

If you've never read Ms. O'Connor's works, you may be in for a surprise.  This quiet, unpretentious, and devout woman will shock you with the violence, both interiorly, and often, exteriorly, of her characters.  Her stories are often driven by grotesque people, and seemingly depraved behavior.  No one is immune from the mortal upheaval of life, no matter their station, their opinion of themselves, their personal ambitions; their gifts, or their handicaps.  In "Revelation" a woman is devastated by a vision that reveals she may have to share paradise with those she considers undeserving.  A grandmother learns she is willing to trade the lives of her family in order to continue living in "A Good Man Is Hard To Find".  Then there's "Everything That Rises Must Converge", the tale of a mother/son bus ride to the YMCA that ends badly, but may result in wisdom, however unwelcome.  If a single theme could be said to run throughout her writings, it is that all are eligible for redemption: black and white, male and female, saint and criminal, and that everyone, however imperfectly, and sometimes violently, is searching desperately for it.

Which brings me back to the beginning--what about that title?  Well, when you consider the body of O'Connor's work as the sum total of who she was, the answer may not be so surprising.  It refers to a work by the French priest, philosopher, and scientist, Pierre Teilhard de Chardin titled "Omega Point".  Here is the pertinent quote: "Remain true to yourself, but move ever upward toward greater consciousness and greater love!  At the summit you will find yourselves united with all those who, from every direction, have made the same ascent.  For everything that rises must converge."  Remarkable words from a remarkable (and controversial) man, and embodied in a truly gifted writer. Father de Chardin (1881-1955) probably did not know that his theological and philosophical works were influencing a writer in rural Georgia.  On the other hand, most people at that time could not have told you who Fr. de Chardin was (As a side note: Fr. de Chardin was the model for Wm. Peter Blatty's Fr. Merrin in "The Exorcist").   Yet, he was one of those rare and luminous souls whose insight and brilliance have influenced millions of people, while the man himself has largely been forgotten.  Though a priest, he was also a scientist, and participated in the discovery and study of Peking Man.  And it was through his study of science, that he offered an alternative theory to the biblical origins of man--a theory that was controversial at the time and remains so.  *He posited that the  theory of evolution was entirely compatible with the Church's long-held belief that God created man; that, in fact, there was no conflict when one considered that God provided the essential spark to creation itself.  The actual mechanics leading to man's advent should not trouble us, as they were guided by our Creator.  Though many of Fr. de Chardin's teachings do remain unendorsed by the Church, and are suspect in many ways, it is worth noting that Pope Pius XII agreed that the theory of evolution was not incompatible with the Church's teachings, so long as it encompassed man as possessing a soul granted by God Himself, a view  repeated recently by Pope Francis.

Less known, perhaps, was Fr. de Chardin's more subtle contribution in his capacity as theologian.  **Taking on a long-held belief that only the work of the religious (read priest, nuns, monks, etc...) contributed to the glorification of God, he held that all peoples, in their everyday endeavors, had it within their power to contribute to the sanctification of the world (Opus Dei--the boogeyman of "The Da Vinci Code" holds to this belief, as well--after all, Jesus was a carpenter).  In other words, he contended that by offering up their labors to God, anyone could serve in His glorification. In essence, that we should all be striving to move up, to rise up together..."For everything that rises must converge."

It seems that Flannery O'Connor and Fr. de Chardin, each in their own way, did exactly that.

*Please note that this interpretation of Fr. de Chardin's theory is my own, and probably poorly represents his intentions.

**Again, I take full responsibility for whatever damage I do here.