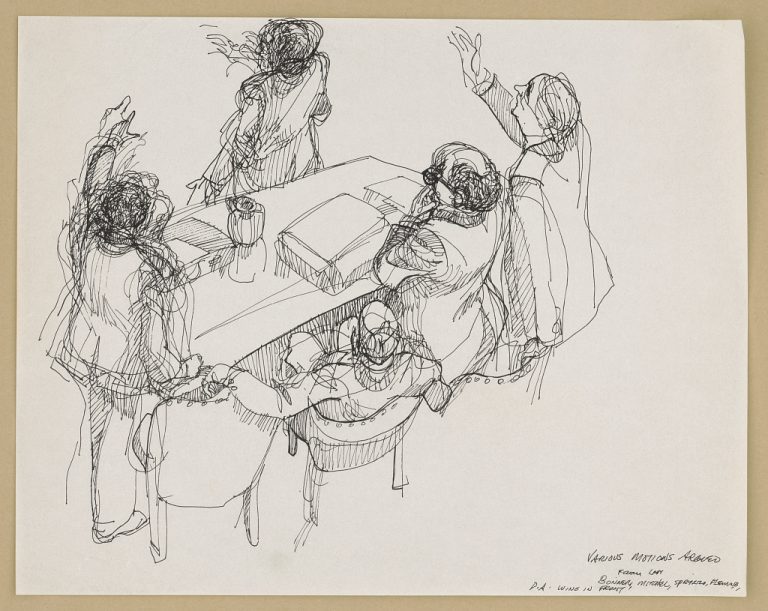 1. Pictures from a Prosecution. Back in 2017 the Library of Congress held an exhibit of unusual art: drawings by courtroom illustrators. Fascinating stuff including such sinister types as Charles Manson, Bernie Madoff, and (?) J.K. Rowling.

2. Man, that's succubustic. I have mentioned Lowering the Bar before. A wonderful website about all that is ridiculous in the world of law. This entry concerns a California attorney who used (invented, really) the word "succubustic' to describe the behavior of a female judge who refused to grant him the attorney's fees he wanted. (Apparently the lawyer worked very hard on the case, clocking 25 hours in a single day, for instance.) He also referred to the "defendant's pseudohermaphroditic misconduct." Stylish.

3. Write like a girl. Useful for all of us boy author types: Women Share the Biggest Mistakes Male Authors Make with Female Characters. Here's one from jennytrout: "We have never, ever looked in a mirror and silently described our nude bodies to ourselves, especially the size/shape/weight/resemblance to fruit, etc. of our breasts."

4. Write like a cop. From Robin Burcell, Top Ten Stupid Cop Mistakes (in Fiction). "Only some of the bosses are evil or stupid..."

5. "Dieoramas." Article from Topic Magazine about Abigail Goldman, who  is an investigator for the Public Defender's office in my county. Her hobby is making tiny 3-D "reproductions" of entirely fictional murder scenes. Creepy...
Posted by Robert Lopresti at 00:00 9 comments