I was first introduced to Raymond Briggs with Fungus the Bogeyman, and then his dystopian heartbreaker When the Wind Blows. I hadn't realized he was already famous in the UK for his holiday stories, The Snowman, and the two Father Christmas books. Briggs himself claims to have no real attachment to Christmas, but for all that, here's some cheer. You'll probably recognize the line in his drawings, which feels altogether specific and familiar.

Bless us each and every one, in this season of both want and plenty. 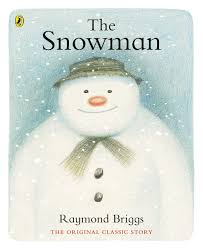 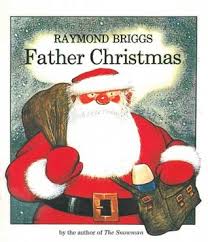 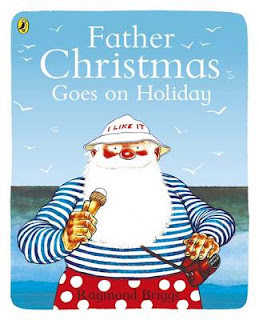 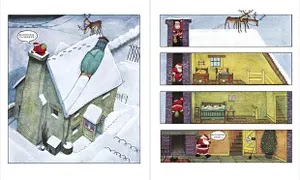 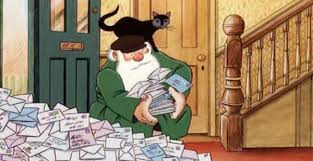 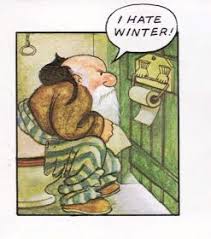 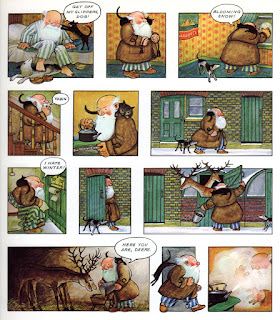 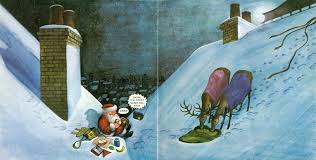 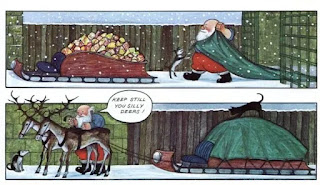 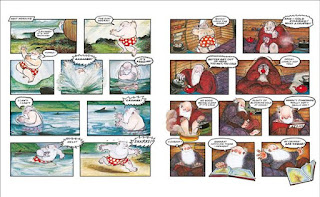 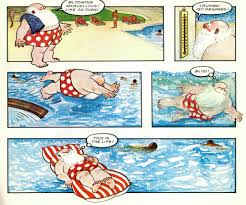 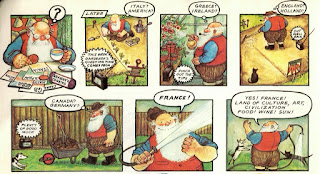 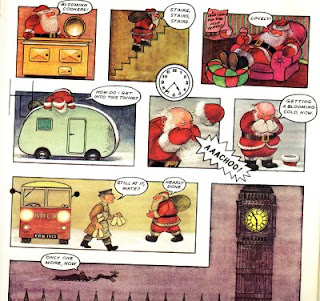 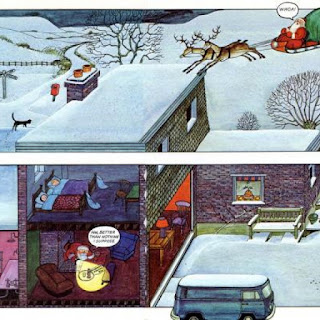 Email ThisBlogThis!Share to TwitterShare to FacebookShare to Pinterest
Links to this post
Labels: Father Christmas, Father Christmas Goes on Holiday, Raymond Briggs, the Blessings of the Season, The Snowman

My Thoughts On The Big Lie— Santa Claus

Santa is crying because he thinks I missed out on the joy of believing in Santa Claus. He is mistaken. Although I knew from the first day I heard somebody mention Santa Claus didn’t exist, I still enjoyed Christmas. My mother told– no, warned– my father, grandmothers, grandfathers, uncles, aunts, and anybody else who dared to mention Santa Claus to me, not to be telling her son that Santa Claus lie.

You’re thinking I must’ve grown up really disappointed during Christmas when all the kids wrote letters to Santa Claus. Nope. I never told my friends he didn’t exist, either because my mother told me not to or I instinctively knew not to. I prefer to believe the instinctive thing. I didn’t write letters to Santa Claus because my mother said she was Santa Claus, and so, I told her what I wanted. Although we weren’t poor, still I wasn’t always sure she would have the money to get what I asked for, so you see, I was as surprised on Christmas morning as the kids who believed Santa Claus, with his fat belly and bag full of toys, came down the chimney.

I liked the idea of Santa Claus. I liked it so much that I didn’t tell my two cousins, the daughters of my uncle the bootlegger, that Santa Claus wasn’t real. I became Santa Claus to them, helping my aunt or grandmother shop for toys, hiding them, and placing them under the tree on Christmas Eve after they had gone to sleep. Santa Claus may not have been real to me but he was to them. I always wondered, however, why they never asked how he could come down our chimney. He certainly was too fat to squeeze through the stove pipe after he got down the chimney and then into the stove, which had hot coals burning all night.

Christmas is the holiday I enjoy most. I try to forget the fact that the criminals, pickpockets, shoplifters, purse snatchers, carjackers, etc., are out in force during the holidays. What I enjoy most on Christmas morning is seeing the faces of my grandkids, as they open their presents.

But a TV commercial has me worried about the life of Santa Claus. The women in the commercial buy gifts at a store, and when Santa enters their homes, they confront him with smirks on their faces that say they don’t need him anymore. I’m not a conspiracy theorist, you understand, but I can’t help but think that, as Christmas has become more and more commercialized, some merchants may be trying to get rid of Santa Claus. Okay, I’ve seen some positive commercials showing Santa using a smartphone, so all is not lost. He’s fighting back with the help of digital technology.

To keep negative feelings from messing with my mind during the holidays, I listen to soulful Christmas music: Nat King Cole singing the traditional Christmas songs, The Temptations’s interpretation of “Silent Night”; my oldest grandson’s favorite,  gravelly voiced Louis Armstrong singing “’Zat You Santa Claus”; Booker T and The Mg’s instrumental “Jingle Bells”; and Otis Redding singing the all time favorite “White Christmas.” On Christmas morning when my grandkids come for their presents, they hear Nat’s melodious voice coming from the CD player, and I watch with a smile as they open their presents.