The Revolt of The Oyster 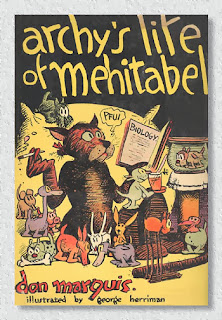 Don Marquis, who died seventy years ago, is probably best known for ARCHY AND MEHITABEL, but he published some thirty-five books, and his daily newspaper columns were widely read. THE REVOLT OF THE OYSTER came out in 1922, a collection of what are best described as Shaggy Dog stories (some of them in fact told from the dog's POV). 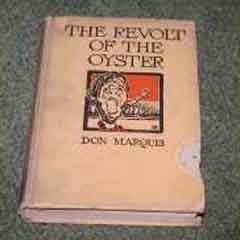 This post, though, isn't really about Don Marquis, that's just a loose hook. I first ran across THE REVOLT OF THE OYSTER in my grandmother Ada's summer house on Salters Point, near New Bedford, on Buzzards Bay. Anybody who's ever rented a vacation cottage remembers that they're often furnished with old Agatha Christie paperbacks, say, or Louis L'Amours, or the Hardy Boys, and I remember going down every year to Ada's house, until I was maybe fourteen or fifteen, and every year I'd go straight to the bookshelf and take out the Don Marquis again. I never took it home with me. I always left it there for the next summer, a talisman, or a touchstone, if you will. I associated the book with that particular place, the smell of the ocean, the light on the water, the house itself, with its porches overlooking the seawall, my grandmother's sister, my Aunt Al, sitting in her room by the windows, playing her endless games of solitaire.

My other grandmother, my mother's mom, had a cottage up in Maine, at a place called Hancock Point, across from Mt. Desert Island. The way it seems to me now, although I may be misremembering those long-ago summers, is that we'd spend July at Salters, and August in Hancock. Hancock had a little seasonal library, most of the books out-of-date, on loan or donated, and there was a children's wing on one side, a great place to spend a rainy day. The book I checked out every year was THE BEARS' FAMOUS INVASION OF SICILY, and again, I connected it particularly to Hancock Point. I never thought to read it, or even try to find it, anywhere else. It was that physically specific.

Memory is of course inexact, and it shifts under our 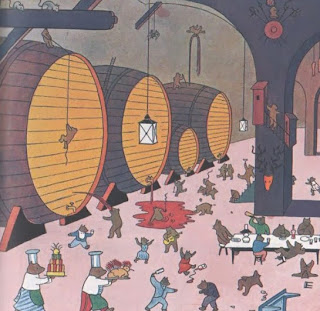 feet. Also, we invest old favorites with our own imagination. Was the BEARS book really any good? I really only remember the drawings, which were wonderfully evocative. You could probably say the same thing about the Babar stories---if you look at them from a grown-up perspective, are they an apology for French colonialism? I'd rather no project this kind of moral re-reading into them. It stifles delight. And we were innocent of politics, then. We were kids, after all, and maybe less demanding. We satisfied ourselves by entering an unfamiliar world, one that we inhabited, and populated, that became more familiar over time. If, in fact, not the books, per se, that sense of wonder we recall, that first encounter. It brings back to me the smell of the piney woods, or the salty rocks, or a fire in the fireplace, on a stormy night. My childhood, in a word, a time and a place that no longer exists.

This isn't loss, or regret. It's more a kind of conjuring trick, an act of reimagination. We're never going to be nine years old again, but we can visit, and when I read THE REVOLT OF THE OYSTER, it becomes, for me, a trip to Ada's house by the shore and the world of summers gone, a game of solitaire, shuffling the cards.
Posted by David Edgerley Gates at 00:00 10 comments