A Quick Visit to the Renaissance

One of the many advantages of living in the Big Apple is access to some of the great museums, and thus some of the great art, of the world. One exhibition I’m glad I didn’t miss was the giant show of Renaissance portraits that I saw back in early 2012.

The Met is a ten or fifteen minute jog across the park for me, though I don’t get there as often as I would like. I particularly like portraits, which feed the fascination with people, the curiosity about what they’re really like inside, that led me to my two careers of writer and therapist.

Getting your portrait painted was serious business back in the quattrocento, much like Victorian portrait photography, though more expensive, I imagine. No spontaneous poses, no “Say formaggio!”

In the early portraits, both men and women were invariably shown in profile (“Do you think they were familiar with Egyptian art?” my companion asked), unflattering as that view was to some of the sitters’ aquiline or otherwise generous noses.

Instead of wedding photos, couples of means had their portraits painted together to commemorate a marriage. I can imagine all sorts of stories about them, especially the gentleman in red and what must have been his much younger wife. 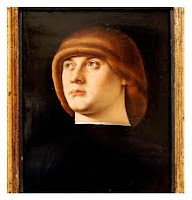 If you think 21st century hairstyles are weird, look at what the Florentine gentlemen were doing with their hair. The blurbs at the museum said this fetching style was called a zazzera. The glossary of the website florentine-persona.com defines zazzera as “a tuft or lock of hair on a man's head, especially in front.” In this case, I think a couple of pictures are worth a lot more than thirteen words of definition. The glossary makes up for its understatement by informing us that “a man with such a notable tuft or front lock” was called a zazzeruto. Notable, yes, that’s more like it. And “a very vain person, especially of his hair,” was called a zazzeatore. The older gentleman’s more conservative haircut makes him look, to my eyes, Roman—or almost modern.

Portraits have survived of some of the celebrities of the day. Here’s Giuliano de’ Medici, one of the family of merchant bankers who ruled Florence for three generations, painted by Botticelli. Considered a playboy compared to his brother Lorenzo, civic leader and patron of the arts, Giuliano was assassinated in the Cathedral (the Duomo) at the age of 25. 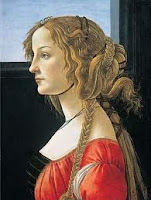 And here is Simonetta Vespucci, considered the most beautiful woman of her day and believed to be the model for Botticelli’s Venus on the Half Shell (no, that’s not what they really called it). Or perhaps it’s Simonetta, but not what she really looked like— the museum’s curators hedge their bets.

One of the most remarkable paintings in the exhibit was this one of an old man and his grandson, almost modern in the way it conveys their affection. While the expression “warts and all” would not be applied to portraiture for another three hundred years or so (it’s attributed to Oliver Cromwell in the seventeenth century), they’re such a prominent feature that if the artist had left them out, the painting would not have resembled the old man at all. The Met’s blurb kindly explained that he suffered from the disease of rhinophyma.

Wonderful as the paintings are, the portrait that fascinated me most, in a creepy kind of way, was a cast of the death mask of Lorenzo de’ Medici.

Known as Lorenzo the Magnificent, he was the most brilliant and celebrated member of a family that had it all: wealth, power, patronage of the arts. To whom can we compare them? The Kennedys? The Rockefellers? No, there’s no comparison, because the Medici weren’t hampered by electoral politics or income tax or the media. So here’s a man whose name and achievements are still remembered five hundred years after his death, and this is not a painting. It’s Lorenzo himself. It’s what the guy really looked like, stubble on chin and all.

Not only did I find this intimate glimpse of Lorenzo mesmerizing, but it also raised a lot of questions. Have we killed celebrity by glutting the market? Has the flood of new information and constantly emerging personalities made it a lot less likely for people’s reputations to live on? Would you want the world to be interested in what you look like five hundred years after you die? Would you want them to see you dead? How long a shelf life do you think today’s photographs will have? You post them on Facebook as soon as you take them, and then they're gone. For that matter, how long a shelf life does the planet have these days?
Posted by Elizabeth Zelvin at 00:00