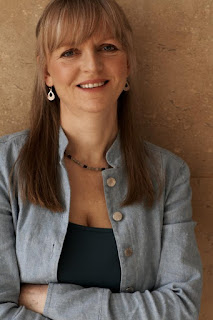 Ruth Downie is the author of five historical mysteries set in ancient Roman-occupied Britain. Her protagonist Gaius Petreius Ruso is a Gaul-born Roman citizen serving in Britain as an army doctor. In the first book he saves the life of a dying slave- a strong-willed Briton named Tilla, who becomes Ruso's "housekeeper," and eventually his wife. Together the pair find themselves plunged into a series of awkward situations (with Tilla usually doing the plunging!) invariably resulting in Ruso's reluctant investigation of some sort of ill-concealed malfeasance.

Ruth, thanks very much for taking the time to answer some questions about yourself and your work. First: please tell us a little bit about yourself.
I worked as a secretary/administrator after University, and made a mental escape into creative writing as an adult. This started with short stories, and I was hugely encouraged by being runner-up in a “Start a Novel” competition for a national newspaper (The Daily Mail) and by winning the Fay Weldon section of the BBC’s “End of Story” competition. ‘Medicus’ started as three chapters for another “start a novel” competition run by the Historical Novel Society, (to whom I’m hugely grateful). There are now five novels in the series, and a sixth should be published in the summer of 2014. Who’d have thought it?! 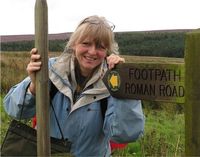 Meanwhile I’m delighted to have returned to live in the West Country after many years’ absence. I have a husband, two grown-up sons and a cat, and am never happier than when on an archaeological dig in the sunshine.
How did you come to being a writer?
My degree was in English literature, but frankly that put me off - when you spend three years reading literary masters, anything you might produce yourself looks feeble in comparison. It was only years later when I had small children at home and was studying for an accountancy exam in the evenings that I decided I needed to loosen my brain up, and tentatively ventured into a Creative Writing class.

So why write historical mystery? And why a character from Britain's distant past? Especially someone so "non-Briton" as Gaius Petreius Ruso? 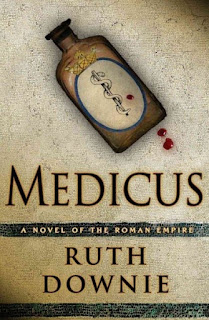 I never realised how interesting ancient history was until we went on a family visit to Hadrian’s Wall. Rather late, it dawned on me that the past was populated by real people, and that they had been here. When we learned in a museum that, “Roman soldiers were not allowed to marry, but were allowed to have relationships with local women”, I began to wonder what must have happened to those women. So initially I was fascinated by the mystery of all those lost stories: the murders came later.
As for Ruso: I wanted a foreigner’s take on the Britons, and I liked the tension of that foreigner being part of a long-term occupying force. It was interesting to have Britannia as what we’d now think of as a “developing country” – especially as plenty of the Britons were not at all interested in development, and would rather have been left alone.
The character of Tilla is dynamically drawn, possessed of a unique voice, and plays an important role in each of the books in this series. Did you envision writing something wherein a "female counterpart" would play such a large role when you first started writing about Ruso and his world, or did Tilla "intrude" on your original plans?
Tilla was definitely there from the start: she’s the “local woman” who has a thing or two to teach the know-it-all Romans.
In my limited experience with writing and publishing mystery-themed historical fiction I've found the research itself to be something of a necessary quagmire. On the one hand it's a requirement (albeit an enjoyable one) if you wish to have the ring of authenticity to your work. On the other hand, it's possible to go too far, to place too much emphasis on it, to include so much historical description that it bogs down the narrative. You seem to have a terrific handle on this, including enough historical detail to give your narrative the proper "feel" for the period involved, without overdoing it. How do you tackle the question of research: how much to do, how much to include? And do you continue to research once you've begun your actual drafting of the novel?
To be honest I’ve never really got the research under control. I’d happily read books, wander round 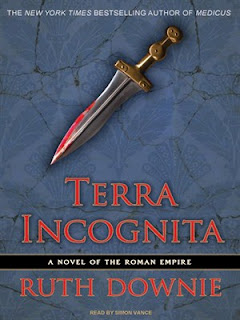 sites and museums, and trawl around the Internet all day every day. (Who wouldn’t?) I’ve also done a lot of archaeological digging on a Roman villa site and a certain amount of hanging around re-enactors and wearing mock Roman clothes, which is great for getting the ‘feel’ of the past.  It’s quite a struggle to set all this aside and get on with putting the words in order, and I’m very easily distracted back into research if something crops up that I’m not sure about.


As a reader, however, I’m very impatient. I want to know what happens next. I’m not interested in struggling through the undigested fruits of the author’s research - although if I ever find a way to fit a clue into the patterns on Romano-British box flue tiles, they’ll turn up somewhere in a plot.  I’m aware of the advice that everything should be relevant to the story, although I fear I don’t always abide by it.  Sometimes I can’t resist slipping in an entertaining fact. SEMPER FIDELIS has the “epispasm,” the procedure on offer in the ancient world for any gentleman brave enough to want to disguise his circumcision. I suspect that my subconscious may have arranged part of the plot specially to get that in…
In your nonfiction asides outside the narrative of you novels you do a nice job of breaking down what stems from fact and what is pure invention within your work. Do you find fans appreciative of that?
I’m glad you asked that! I’ve often wondered whether it was a good idea or not, because people seldom comment on it. However - I’m writing this from Crimefest, (http://www.crimefest.com) so yesterday I took advantage of being on a discussion panel to ask the audience what they thought. It turns out that most people think it’s a good idea. Several said they glance through the notes before they read a book, which I confess I do, too. And as my fellow-panellist Jane Finnis (http://www.janefinnis.com) pointed out, ‘nobody has to read it if they don’t want to.’
Speaking of "fans," every writer of historical fiction who stays in the game long enough eventually has at least one encounter with someone who approaches them either in person or via email, etc., and insists they got this or that historical detail "wrong." Do you find this a challenge? How do you address this sort of thing? 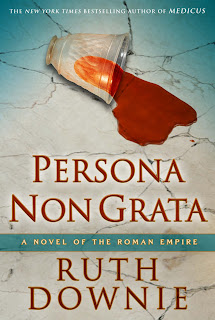 I’m not a historian, but mercifully this doesn’t happen as often as it did in my nightmares after I found out the first novel was going to be published. I’m fine with it if people contact me personally – sometimes it gives me a chance to explain. (I really MUST check future US editions to make sure the word ‘corn’ is translated into ‘wheat’ because it’s very distracting for the discerning American reader to find the Romano-Britons apparently growing what we call sweetcorn, or maize.)

At other times, although it’s always a blow to the pride to realise you’ve got something very publicly wrong, it’s useful to know for next time and I’m glad people are interested enough to care. What I do struggle with is the very occasional internet reviewer who complains about an error that isn’t an error at all. I don’t reply to reviews but it does bother me that someone else might read that, assume the critic is correct and be put off trying the book.

Speaking of the writing, can you briefly walk us through your process?
Well I’ll try, but only because it will serve as a warning to others. On a good day I wake up with an idea about something I’ve been wrestling with the day before, and scribble it down in the bedside notebook – I try to write a page or two about something every morning, even if it’s only the weather. Then I type it up later and with luck, I get sufficiently involved in it to lose track of time. On a bad day I footle about checking emails for far too long, waste the most productive part of the day, and end up with nothing except a feeling of guilt.

A good day will see 1000 words added to the count. A nearly-at-the-deadline day might even see 3000 words, but not necessarily the right ones.  I’ve now bought “Freedom” software in an attempt to keep myself away from the Internet. And yes, I do know how feeble that sounds!

The best part of the process is re-writing, when the editor has pointed out what doesn’t work and hopefully what does, and you have a chance to try and fix it.

Setting sure seems to play a vital role in your work. So far in your series you've resisted setting any of your books in the same place twice, featuring locations such as Deva (Chester), Londinium (London), Eburacum (York), and the area north of Hadrian's Wall in lowland Scotland and in southern Gaul (France). Any chance of a return to one or any of these places? Also, any chance that Ruso and Tilla will eventually wind up in Aquae Sulis (Bath), perhaps to take the waters, only to find....?
Book Six, which isn’t due out until August 2014, will be back in the Hadrian’s Wall region, because 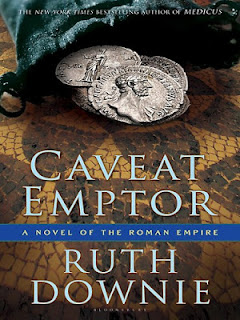 historically I’ve reached the years when the wall was built. But instead of Corbridge, we’ll be thirty miles away in the central region, nearer to Vindolanda and up in the hills.

As for Aquae Sulis - Book Two was very nearly set there. I’d bought all the research books and been for the field trip – but told nobody else - when I discovered Kelli Stanley’s website and found that she was about to send her own Roman medic there in her next book. There’s only a limited amount of source material to work with and it would have been silly to try and draw from the same well, so I fear Ruso won’t be taking the waters after all!
Which authors, regardless of genre categorization, do you consider your primary influences as an author? And are there authors whose work you enjoy, but don't consider influences?
That’s tricky, because I suspect in some way we’re influenced by everything we read. (*Note to self: spend less time messing about on the Internet, LOL*) Discovering Lindsey Davis’s Falco novels gave me the confidence to carry on writing Roman-era fiction with modern dialogue and humour – something I wasn’t sure was ‘allowed’ when I started doing it. I love Martin Cruz Smith’s Russian novels, because Renko is such a superb lead character. CJ Sansom’s Shardlake series is a must-read, and anything by Elmore Leonard is an example of how to tell a fine story with a few words.
Thanks so much for taking the time to be interviewed! As a sign-off, please tell us what you're reading right now? 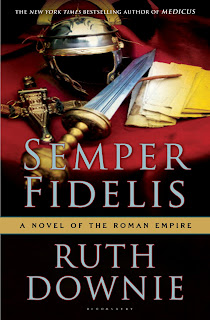 I’ve just finished ‘Pigs in Clover’ by Simon Dawson – the story of a couple who abandoned their jobs in London to live on a smallholding. It’s a very honest, moving and funny account, especially as I’ve both met and eaten some of the livestock Simon mentions.
Next up: Robert Goddard’s “The Ways of the World” – a proof copy for review. I’m looking forward to being taken to Paris in 1919.

Posted by DoolinDalton at 00:12 5 comments