by Joseph D'Agnese
Fate or William S. Baring-Gould hath decreed that the January of every year must be devoted to the pursuit of Sherlockiana. So maybe it’s worth sharing that I made the acquaintance of Mr. Sherlock Holmes sometime in the mid-1970s, when he appeared under the tree one Christmas, dolled up in cheap wrapping paper. He resided in a curious boxed set containing six paperback volumes that probably set Santa back $7.50.

To be honest, I had tried to make sense of Holmes when I was even younger, paging through a heavy hardcover I’d found in my school library. I didn’t enjoy my first rodeo with the gentleman from Baker Street. Back then, I was under the sweet impression that one read books by starting at page one, and proceeding thenceforth until you reached the final page. Page 1 of that musty, water-stained hardcover meant starting with A Study in Scarlet, the first Holmes novel. Critical to the canon, to be sure, but probably not the best jumping-off point for a fourth grader. Bored and overwhelmed, I returned the book to the library and promptly forgot about Holmes.

But years later, I was older and had begun consuming Ellery Queen novels like they were bags of potato chips. It helped that the covers of the Holmes paperbacks were enticingly illustrated by an artist identified only as ANDERSON. The Holmes in these images was a pale, hatchet-faced genius. But if I had started at A Study in Scarlet again, I probably would have given that genius a pass for the second time. I was saved by the mostly unlikely component of a book that a kid would ever care about: the introduction. 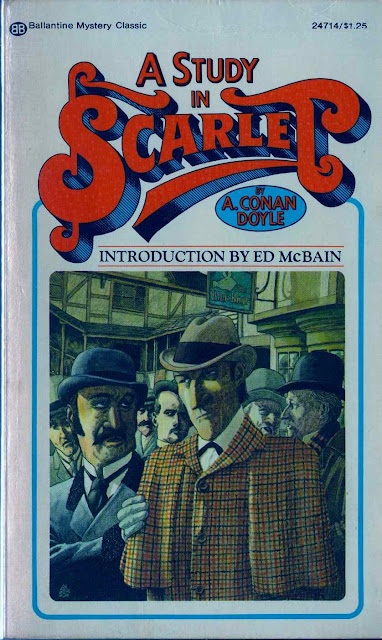 Each of these books bore a short intro by a famous mystery writer. Ed McBain, for example, introduces A Study in Scarlet by pointing out how often in this maiden adventure Holmes (that is to say, Doyle) mocks policemen and police work. McBain hilariously describes what would happen if the men of the 87th Precinct took Holmes in for questioning, and charged him with defamation. 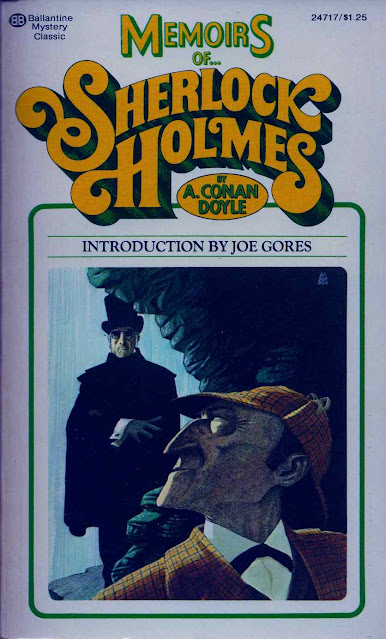 Joe Gores, who introduces The Memoirs and who spent a dozen years as a real-life private investigator, lovingly pokes holes in Holmes’s skills as a private consulting detective. 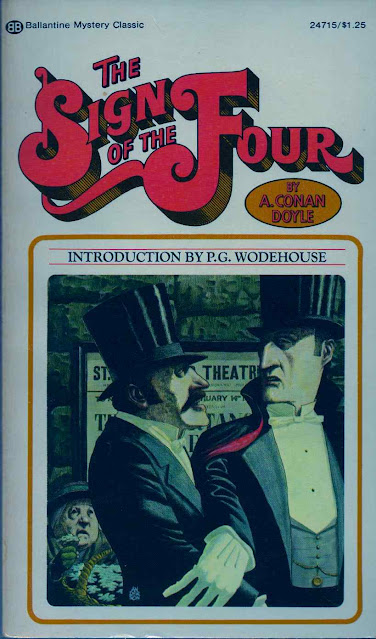 P.G. Wodehouse, who made a career out of skewering the British upper crust, theorizes in his introduction to The Sign of the Four that Holmes must have deep pockets since no one ever seems to pay him very much to solve their little problems. Wodehouse riffs on this for a while before revealing his theory about the source of Holme’s filthy lucre: Holmes was in fact Moriarty all along! 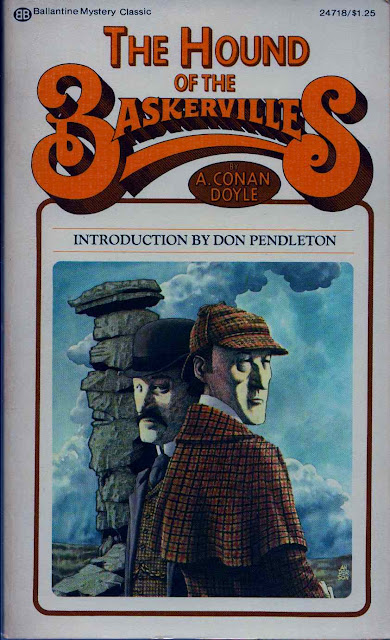 All great stuff, by great writers, but it was all lost on me, because in 1975, I had yet to enter the squad room at the 87th precinct. I knew nothing of Jeeves and Bertie. I sure as heck had not read a single adventure of The Executioner (author Don Pendleton intro’d The Hound of the Baskervilles), nor The Seven-Per-Cent Solution (written by Nicholas Meyer, who introduced The Return…). 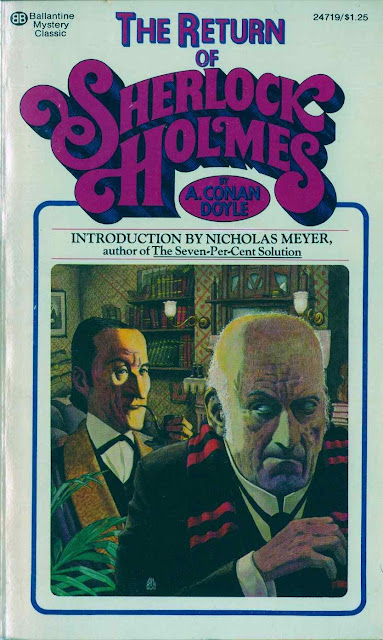 No. The only introduction that caught my eye was the one opening The Adventures of Sherlock Holmes. It was a now-famous essay by Frederic Dannay in which he tells how a loving aunt presented him with a library copy of The Adventures to pass the time when he was a bedridden with an ear infection. I had no idea that I was reading the words of one-half of Ellery Queen. I was utterly clueless about the nature of their authorship. The name on the cover of the book said Ellery Queen, and in my ears I heard the voice of the late actor Jim Hutton:

I opened the book with no realization that I stood—rather, I sat—on the brink of my fate. I had no inkling, no premonition, that in another minute my life’s work would be born…

I started on the first page of “A Scandal in Bohemia” and truly the game was afoot. The unbearable pain in my ear…vanished! The abyss of melancholy into with a twelve-year-old can sink…forgotten!

The rest, of course, was history. “Ellery” reads the book in a single night, wakes the next morning, drags himself to the library with a throbbing ear, and begs a librarian to let him have more Holmes, even though he does not yet have a library card. He leaves with The Memoirs, A Study in Scarlet, and The Hound, and devours them each in turn. Well, this was promising, I thought, diving into the very first adventure myself. 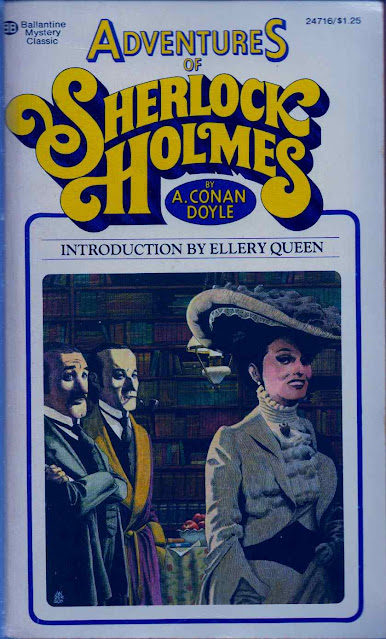 I enjoyed that fogbound world a good deal, perhaps not as much as the young Dannay. I just didn’t grasp a lot of the finer plot points. Some of the endings struck me as ambiguous, as if the world’s adults had conspired to leave kids in the dark at every turn. Even today I don’t think the Holmes stories make ideal reading for kids. (A future column on this assertion is in the works.)
But still, I treasured that little boxed set and its colorful covers. It never occurred to me until years later that I had not read every single Holmes adventure. For some reason, probably having to do with cost, Ballantine had omitted three further books—The Valley of Fear, His Last Bow, and The Case-Book—from the set. I didn’t discover them until college, and it was a delight to find that the hansom cab had kindly consented to stop for me one more time. This time around, I understood the nuances of Holmes’s world far better. I loved the prickly old coot.
My childhood boxed set was lost during one of my moves, and I had to wait for the Internet and online bookselling to be invented before I could be reunited with another version of them. This set lives face out on the top of my living room bookshelves. All I have to do is glance up to see Holmes sneering down at me. “You will not abandon me again,” he seems to be saying, and I swear that I shan’t, ever.
* * *
By the way: Years ago I acquired Baring-Gould's Annotated Holmes and, slavishly, the newer annotation by Leslie S. Klinger—though I have to admit that they are more suitable for bench-pressing workouts than long nights reading in front of the fire, all the while cutting off circulation to your femoral arteries.
However, by far the best ebook version of the Holmes canon I’ve found is the one published by Top-Five Books, which includes all the stories and all the illustrations that appeared when the stories were first published. Check it out here.
See you in three weeks!
Posted by Joseph D'Agnese at 00:00