by Steve Liskow
Most of my titles come from songs, generally rock and blues, because I originally saw the PI who became Woody Guthrie as a wannabe guitarist. He and Megan Traine, a former session musician, would solve mysteries with a musical slant to them. The band in an early version of the first book was inspired by a few real bands I knew that never quite made it. Some people remember The Electric Prunes and their one big hit. More people remember the Buffalo Springfield, probably because Stephen Stills, Neil Young, Richie Furay and Jim Messina all went on to further success.

But do you remember Moby Grape?

Five solid gigging musicians joined forces in San Francisco late in 1966. Skip Spence wanted to play guitar with Jefferson Airplane, but they already had Jorma Kaukonen and Paul Kantner, so Marty Balin turned him into a drummer. Spence played on the band's first LP and wrote several songs they didn't use. They replaced him with Spencer Dryden, whom they stole from The Peanut Butter Conspiracy (remember them?).

Peter Lewis, a skilled finger-picking guitarist, was the son of Loretta Young. He, Spence, and Jerry Miller created a three-way guitar whirlwind with zest to rival the Buffalo Springfield. Bob Mosley played bass and Don Stevenson played drums, but all five sang, and their harmonies will give you chills. All five composed, too. 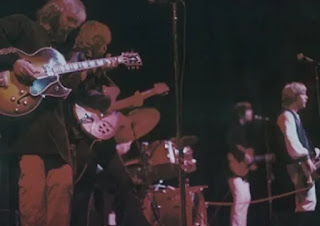 Producer David Rubinson recorded their first album for Columbia over the course of FIVE OR SIX DAYS in March and April 1967. That's demos, arrangements, backing tracks, instrumental overlays, vocals, everything. They were live performers, so they only needed a few takes in a studio with then state-of-the-art 8-track machines.

Columbia released the album in June, about two weeks after the Beatles released Sergeant Pepper's Lonely Hearts Club Band and three months after the Airplane released Surrealistic Pillow (Which included a song by Spence). The songs ranged from acoustic folk-rock to country-tinged ballads to sparkly pop to blues to weird psychedelia, and every song was a gem.

Moby Grape had local fame and fortune, and now world-conquering success was only a tour away.

Then it all went to hell.

Jefferson Airplane had fired manager Matthew Katz (along with Skip Spence), and when he took over the Grape, he conned the members into signing a contract that gave HIM the right to the band name. The legal battles continued into the 21st century and blocked the release of many songs. It also prohibited the band from reunion performances under that name. Katz is why the Grape's set never appeared on the film or recorded versions of Monterey Pop, too. He demanded a million dollars for the rights...in 1967.

Columbia, still basically an "old people's label," dropped every ball they could in promoting the band and the album. The release party at the Avalon Ballroom had garish pink velvet press kits with teeny-bopper bios of the band and all the album's singles--more about THAT in a minute. Thousands of orchids were dropped from the ceiling, and dancers slipped on them and fell all over the dance floor. Columbia supplied 700 bottles of wine labeled "Moby Grape" for the dignitaries, but nobody thought to provide corkscrews. At the end of the evening, police busted three members of the band on their way home...with marijuana and three under-age girls in the car.

What could get worse? Glad you asked. 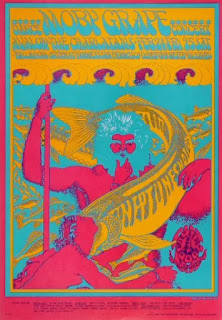 Columbia, in a fit of stupidity no one has yet explained, released five singles--ten songs from the 13-song album--on the same day. They were all in the press kits. DJs didn't know which songs to play and they cancelled each other out on the airwaves. Local fans thought the band was tying for the big bucks, which cost them their local San Francisco hippie base.

Columbia wanted a second LP to recoup the losses, and brought in a different producer to "shape the band up." Remember, Rubinson got the first album out of these guys in six days.

The band sank into drug use, and Skip Spence, who everyone admitted was a genius but always a bit strange, eventually went after Don Stevenson with a fire ax. He and Bob Mosley underwent treatment for schizophrenia. The other members drifted into marital problems, money problems, and music problems. Mosley was so distraught he quit the band and joined the Marines...in 1969!

Spence died in 1999, two days before his 53rd birthday. Stevenson no longer performs, but the other remaining members have appeared with Spence's son Omar under various names, including--wait for it--The Melvilles.

There are people who will tell you the first LP was one of the great debut albums in rock history. I'm one of them.

But don't take my word for it. Find it and listen to what might have been.
Posted by Steve Liskow at 00:01