A Morning in Conan Doyle Land


by Stephen Ross
I woke up on Saturday morning not feeling well (this was a month ago, I'm all better). I was resting on the sofa and doing the swipe through Netflix's recently added and currently trending lists, looking for something new and interesting to amuse, entertain, maybe even enlighten. Finding nothing that "grabbed" me, I moved over to Amazon Prime. Flicking down through the rows, I passed the children's section, and a title in that row reached out and took hold.

A Study in Scarlet.

An animated telling of a Sherlock Holmes tale? For kids!? Seriously?!? I selected the program and let it start playing, the cynic in me chortling, this will be good for a laugh. I went in with zero expectations; in fact, minus expectations. I expected Dr. Watson to be played by Scooby Doo. 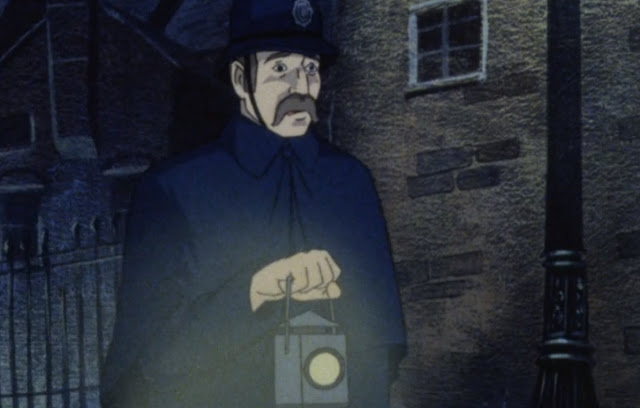 The opening shot is a moonlit set of rooftops; a dark and stormy night in Victorian London. A police constable is on the street, patrolling with a lamp. He winds up on the Brixton Road. He's joined by another bobby. There's a light on in an empty house. They enter. In a dilapidated drawing room, there's a dead body of an elderly gentleman on the floor.

Two and a half minutes in, and I'm thinking, this ain't too bad. The animation isn't going to win any awards, but the storytelling seems to be faithful to the source, and it has mood and atmosphere.
The opening credits started, and I was about to turn the thing off, when the following credit appeared: "With Peter O'Toole as Sherlock Holmes." That got my undivided attention. Naturally, I let the program keep playing. I could happily listen to Peter O'Toole read aloud from the phone directory, or recite the Periodic Table (have I mentioned My Favorite Year is one of my favorite movies?). I had no idea he had ever played Holmes.

For the next 50 minutes, I was away (once again, happily) in Conan Doyle land. The program did indeed prove to be a reasonably faithful telling of the story, Watson was not played by an exuberant Great Dane, and nothing in the story's telling was "watered down" or "rendered appropriate" in any way for children; my biggest fear while watching.

And it's funny, when you think about it: an adult tale of murder, forced marriage (i.e., rape), revenge, and justice filed away for children's viewing pleasure alongside the likes of Anne of Green Gables, the Cat in the Hat, and Spongebob. I presume this was because it was animated. There persists (in some minds) that quaint notion that if something is animated, it must be for kids, that all animations are simply "cartoons" and should be dropped into the "Kids and family TV" box. (I gleefully await the addition of Fritz the Cat.) Had the exact same script of A Study in Scarlet been filmed as a live action drama, then it would have gone straight into the adult drama box. No questions asked.

But I'm glad it did, one way or another, wind up in front of kids. They seem to get so much rubbish in their TV diet. Let them find this quiet little doorway into the world of grownup mystery fiction.

Peter O'Toole did four Holmes animated stories. They were all made in 1983, they're all 50 minutes long (with the exception of Baskerville, 70 minutes), and they're all on Amazon Prime (here in NZ, at least).
I've watched all of them. And as I said, there's nothing overtly special about the animation. The specialness of the telling lies in the stories themselves, and in this instance, the actor playing Sherlock Holmes (not that the films' imagery bears any resemblance to the man). If it's a wet Saturday morning, and you're unwell, I can recommend this medication.