by Paul D. Marks
A long time ago, in a galaxy far, far away or at least it seems that way since I’m talking about the 1990s, I met a guy through the Writer’s Guild (WGAw) who claimed he knew what happened at the Gardner Museum. In case you don’t remember, on March 18, 1990 there was an audacious theft at the Isabella Stewart Gardner Museum in Boston. Two guys dressed like cops stole thirteen works of art valued at a mere 500 million dollars (or 300 million according to some reports, but what’s a couple of mil between friends?). It seemed like pretty easy cut & run heist. And they still haven’t recovered the stolen works and no one’s been thrown in the slammer for it. 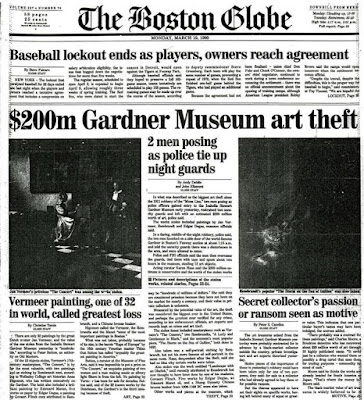 
Now, just to set the scene, this is the top ten from Billboard magazine’s Top Hot 100 songs of 1990: "Hold On,” Wilson Phillips; "It Must Have Been Love,” Roxette; "Nothing Compares 2 U," Sinéad O'Connor; "Poison," Bell Biv DeVoe; "Vogue," Madonna; "Vision of Love," Mariah Carey; "Another Day in Paradise,” Phil Collins; "Hold On," En Vogue; "Cradle of Love," Billy Idol; "Blaze of Glory," Jon Bon Jovi.

These weren’t what I was listening to then, except maybe Billy Idol (I was and still am more into alt music) and some of these may have come out after March, but just so you remember – or don’t – what was going on back then.


Also, Dances with Wolves got Best Picture, Seinfeld was on in first run. Jurassic Park, the book, came out in 1990. Postmortem (Kay Scarpetta, #1) came out in 1990. And we were using Windows 3.0 (introduced in May). Cell phones were ancient by today’s standards. In 1989 the first really portable cell phone came out, the Motorola Microtac 9800X. And, remember dial-up modems and that chhhhhhh sound and getting disconnected every five minutes.

So back in the day, as they say, back before Facebook, Twitter and even before the Google Search Engine started (1997), we had this thing called BBSes – computer bulletin boards. You could log onto them and chat back and forth in green or amber text, depending on your monitor. The Writers Guild had one. I used to chat with a lot of people about a lot of things there. And somehow I met a guy named Brian McDevitt and we became friendly over the BBS. He seemed like a nice enough guy with a story to tell.

Turned out he had a production company – and a nice house in a good part of town. He invited me over and we became friends or friendly, if not fast friends. I didn’t know about his past then, though I did know he claimed to know something about the Gardner break-in.

I remember sitting out by his pool, talking scripts and Hollywood and other BS. I think I was hoping he might option a screenplay for his company. And he seemed like a nice enough guy.

I went there a few times. We shot the breeze, ate, had a few beers. He seemed to have a lot of money and definitely wasn’t playing the role of the starving artist. He seemed like a nice enough guy.

As time went on, controversy blew up in the Guild over him. Some Guild members were seeing cracks in his façade, starting to see through his act. They tried to get him removed from a committee chairmanship, and maybe even from the Guild – hard to remember after all these years. But not for his involvement or knowledge of the Gardner heist, but because he lied to the Guild about his background. Ultimately, I believe they were unable to have him removed.

Before the Gardner heist, McDevitt was involved in another theft: According to the LA Times: “McDevitt also spent time in jail in connection with the 1979 theft of more than $100,000 in cash and bonds from a Boston bank and was charged with two separate felony thefts from Massachusetts department stores in 1989 and 1990. He was convicted of one and pleaded guilty to the other.” All of which actually might make him perfect for Hollywood, though they like their crooks out in the open. So, if he had just been honest he might have been accepted. And he could have gone to rehab and written a book. Maybe one of the majors would have optioned the book and made it into a movie.

And though there were other suspects, because of his background with the previous theft, he became a suspect in the Gardner heist, though he was never charged. Unfortunately, he died in 2004 without giving up any information on the robbery, though he did claim to know where some of the paintings were.

I remember him telling me he knew something about the theft, but not that he had participated in it. Of course, this was before his backstory came out. But he seemed like a very nice guy.

The heist remains unsolved and there is a handsome reward for anyone with info on the whereabouts of the stolen art. From the Gardner’s website:


“The Museum is offering a $10 million reward for information leading to the recovery of the stolen works.

Despite some promising leads in the past, the Gardner theft of 1990 remains unsolved. The Museum, the FBI, and the US Attorney's office are still seeking viable leads that could result in safe return of the art.

The Museum is offering a reward of $10 million for information leading directly to the recovery of all 13 works in good condition. A separate reward of $100,000 is being offered for the return of the Napoleonic eagle finial.

Anyone with information about the stolen artworks or the investigation should contact the Gardner Museum directly. Confidentiality and anonymity is guaranteed.”

So, if you have some info now’s the time to get into gear, get that Rembrandt out of your basement, and get that reward.

I’m not sure why this popped into my head recently. Maybe I heard something somewhere. Or maybe it just bubbled up from the deep like the bubbles at the La Brea Tar Pits. But either way, the crime has never been solved. The art has never been returned. My “friend” never came clean. He died young, apparently taking his secrets to the grave. And to this day, no one knows for sure who stole the artworks.

He might not have been all he seemed to be – and was maybe more on some levels. But he seemed like a nice enough guy. But isn’t that always the way with con men?


Dave Congalton of KVEC Radio interviewed me. Check out the podcast here. My part comes in at 20 minutes, 30 seconds into the recording.

As awards nomination season is upon us, just a gentle reminder that I've got the following short stories that are eligible for 2018:

"There's An Alligator in My Purse" from the "Florida Happens" Bouchercon 2018 Anthology.


"The Practical Girl's Guide to Murder" from Mysterical-E - Spring 2018.


And in the novel category, Broken Windows:


And Broken Windows has been getting some great reviews. Here's a small sampling:


"Although it’s set in 1994, it’s eerie how timely this story is. There’s an undeniable feeling of unease that threads through the narrative, which virtually oozes with the grit, glitz, and attitude of L.A. in the ‘90s. I’m an ecstatic new fan of Duke’s."


"Duke and company practically beg for their own TV show."


"This electrifying novel will jolt your sensibilities, stir your conscience and give every reader plenty of ammunition for the next mixed group where the I [immigration] -word is spoken!"