You Only Live Twice


by Michael Bracken
Though perhaps not as famous as her husband—at least not until portrayed by Courtney Love in The People vs. Larry Flynt—Althea Flynt served, until her death at 33, as publisher or co-publisher of Hustler and other magazines the Flynts produced under various corporate names. She was, at the time I placed my first mystery in the January 1983 issue of Gentleman’s Companion, that magazine’s co-publisher. Though I never had direct contact with her, Althea was responsible for the creation of my series character Christian Gunn and my brief foray into spy fiction.

Though not as famous as their brother Bob Guccione, publisher of Penthouse and other magazines, twin-sisters Jackie Lewis and Jeri Winston published a string of sex letter magazines and, in December 1984, stepped outside the sex genre with the launch of Espionage Magazine, a digest-sized periodical filled with spy stories. Editor/Publisher Jackie Lewis, through Espionage, was instrumental in the continued life and ultimate death of Christian Gunn.

THE GUNN GETS LOADED

I had, in January 1983, effectively jump-started my professional fiction-writing career with the publication of “City Desk” in Gentleman’s Companion (see “Ripples”), and I soon placed a second story in the magazine. Though for quite some time Gentleman’s Companion headed the list of publications to which I targeted new stories, I ultimately only placed three stories within its pages.

In a letter from Gentleman’s Companion Managing Editor Ted Newsom, dated March 11, 1983, in which he rejects “A Matter of Policy” (a story that later appeared in the February 1985 Mike Shayne Mystery Magazine), he notes, “The last word I got on what Althea wants [...] is that she wanted the stories ‘lahk Jaimes Bound ounlie sexier.’” In the letter, Ted also suggests that I submit stories to Hustler, Gentleman’s Companion’s better-paying sister magazine.

I had never written a spy story, but was game to try. Coincidentally, less than two weeks after I received Ted’s letter, “The Spy Who Lay Dead in The Snow,” by Kim Rogal and Ron Moreau, appeared in the March 28, 1983, issue of Newsweek. The article began:


“On a lonely Alpine road north of Nice, the snowplow operator found a parked Peugeot 305, empty, its radio still blaring. Nearby lay a dark bundle that might have been a crumpled overcoat, except for the red stain in the snow. When the gendarmes arrived, they found a body sprawled face down in the fresh powder. Six feet away, they picked up a Smith & Wesson .357 Magnum that had fired three shots. The gas tank in the car read empty. Money and keys remained in the victim’s pocket and there were no signs of a struggle. The police suspected suicide—until they found out who the dead man was: Lt. Col. Bernard Nut, 47, a senior operative in the French Secret Service.”

Once I read that article, I knew I had a hook for my first spy story, and I began writing:


“Lt. Col. Eduard Paroldi, a senior operative with the French secret service, sat in his Peugot 305, nervously tapping his fingers against the steering wheel. He had been parked on the shoulder of the lonely Alpine highway for almost three hours and his stomach was growling. Eduard dug in the pocket of his heavy overcoat for the last bite of a chocolate bar he’d been slowly nibbling at during his wait.”

Paroldi is dead by the end of the first scene, and Christian Gunn, an American operative, is sent to determine who killed him and why. Gunn mixes with British, German, and Russian agents in a wild tale of cross and double-cross.

On August 8, 1983, I completed and submitted “With Extreme Prejudice” to Hustler.

Six weeks later it came back with a form rejection.

Why I didn’t turn around and submit the story to Ted at Gentleman’s Companion I can’t determine from my records. Instead, I removed the graphic sexual content and sent “With Extreme Prejudice” to Ellery Queen’s Mystery Magazine and then to The Saint Magazine, both of which turned it around within a week of submission.

On November 19, 1983, I submitted the story to Mike Shayne, and a postcard from Editor Charles E. Fritch, dated May 6, 1984, notified me of the story’s acceptance.

“With Extreme Prejudice,” the first Christian Gunn story, appeared in the August 1984 Mike Shayne, the second of four stories I placed there. Unfortunately, the magazine was, by then, on its last legs, ending its run in August 1985. 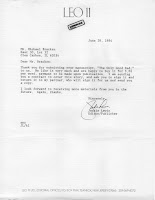 THE GUNN GETS RELOADED

So, I brought Christian Gunn back for “The Only Good Red”:


“Dmitri Sakharov, a low-level member of the KGB, sat on the upper deck of the McDonald’s paddle steamboat and stared out at the swollen Mississippi River. On the table before him was a half-eaten Quarterpounder and an untouched bag of fries. A small Coke was securely captured in one slender fist.”

True to form, by the end of the first scene Sakharov is dead and, once again, Christian Gunn is sent to determine who killed him and why. And, once again, Gunn is caught in a wild tale of cross and double-cross.

“The Only Good Red,” the second Christian Gunn story, appeared in the February 1985 Espionage, the first of two stories I placed in the magazine.

I aimed to feature Christian Gunn in additional short stories—I found in my files, while preparing this, notes for two stories (“Mockingbird Don’t Sing” and “Number Four with a Bullet”)—but I did not complete another before the 1987 collapse of Espionage effectively killed Gunn’s career and the 1989 collapse of the Berlin Wall sucked the life out of spy fiction.

Though Christian Gunn only lived twice, I did write two additional spy stories—“Only Heroes Die,” published in the November 1985 Espionage, and “Soft Focus,” accepted by Espionage in a letter dated March 14, 1985, but unpublished when the magazine ceased operation. “Soft Focus” saw publication, at long last, in the July 2002 Detective Mystery Stories.

“With Extreme Prejudice,” “The Only Good Red,” and ten other stories from the early years of my career are collected in Bad Girls (Wildside Press, 2000), available at Amazon in paperback and Kindle editions.

Learn more about the short life of Espionage as told by one of its most prolific contributors: “I Spy: A Writer Remembers Espionage Magazine,” by Josh Pachter, appears in the January 2018 The Digest Enthusiast. Order a hardcopy or Kindle edition at Amazon.