The Old and the New


by John Floyd
Like most of my SleuthSayers colleagues, I've been writing fiction for a long time. I like to think that I've learned, during those years, some things about the craft. Unfortunately, though, putting the right words together in the right order is not enough to ensure success in this crazy business, so I have also tried (and often failed) to keep up with changes in all the kinds of things editors want to see, in the submissions they receive. That, as everyone knows, can be a moving target.

That's what I am, I suppose. A low-profile writer of crime fiction who has finally realized that novels and short stories, like the language they're written in, are evolving--and that if I want to survive I have to evolve also. I won't attempt in today's column to address issues like traditional publishing vs. self-publishing, printed fiction vs. e-books, mailed submissions vs. electronic submissions, and zombie/vampire trends--but I do want to talk a little about small changes in the way we're supposed to put our stories and novels on paper. Or, more accurately, on our hard drives.

Twenty years ago, when I started writing for publication, there were a group of formatting rules that writers followed, in order to better their chances of getting accepted and published. Some of those requirements are still around and some have become optional, but a great many have disappeared, or at least changed.

Once upon a time …

Consider the following half-dozen "old" rules of writing. Most of them were made because of typewriters and their limitations, but the rules somehow remained in effect for quite some time after computers and word-processing programs and laser/inkjet printers arrived.

1. Always use Courier font. A lot of writers still choose to use Courier for their manuscripts because of its readability, but very few markets require it anymore in their guidelines. I switched over to Times New Roman years ago because so many editors and publishers seem to prefer it. Only once have I had to use something different: an editor asked me awhile back to submit using Verdana. Verdana?? But I did it, and she bought the story.

2. Always put two spaces after a period. This goes back to the way most of us learned to type, in high school. When you had only one font available (Courier), and that font was non-proportional (every letter was the same width), two spaces after a period made sense; one space just didn't seem to "look" right. Now some short-fiction markets and some book publishers--mine, for example--require only one space after a period. I still use two spaces in my e-mails, text messages, personal letters, etc., because it somehow seems more natural and comfortable, but I dutifully follow the current one-space-after-a-period rule in all my manuscripts and in my SleuthSayers columns.

3. Always underline to indicate italics. This is another throwback to the times when there was no way to italicize text in a manuscript. I don't obey that rule anymore, except when submitting to certain publications; some markets, like AHMM, still require underlining rather than italicizing in their submissions. (I suspect that it's because an underlined word can be easier to spot than an italicized word.) Underlined text is of course then changed to italics in the printed, published version of the story. NOTE: If you submit to a market electronically and are asked to copy/paste your manuscript into the body of an e-mail, special features like italics and underlining are of course lost when you save and reopen the file in .txt format. In that case, I use the underscore key ( _ ) just before and just after the word or phrase that should be italicized. The editor will know what you mean.

4. Always round off your word count. I still do this occasionally before typing it in at the upper right corner of the first page of my ready-to-be-submitted manuscript--and when I do, I round it to the nearest 100 words. Usually, though, I just highlight the manuscript text--everything between my byline and the words THE END--and press the "word count" key. I then use that exact figure. This isn't something I worry much about, since I doubt editors really care whether I say "about 2400 words" or "2389 words." But I imagine Faulkner and Hemingway would have been tickled pink and shocked sober to be able to hit a key and get an exact word count. 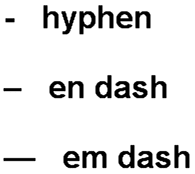 5. Always use two hyphens for a dash. Some submission guidelines still ask that we writers do that--but most markets are fine with the em dash, which is created by typing the two hyphens together with no spaces before or after and then hitting the space bar after the next word. (Assuming, of course, that that feature has been activated in your word processor.) In my opinion, an em dash is another of those things that just "looks" more correct, and more professional, in a manuscript.

6. Always double-space twice to indicate a scene break. For years I did exactly that. The only time I typed any kind of character in between the ending line of a scene and the beginning line of the next was for clarity purposes, if the break occurred at the very top or bottom of a page. And then something crazy happened: a magazine accepted my correctly typed manuscript and then published my story without one of my scene breaks. They just left it out and butted the two paragraphs together, presumably because they or their formatting software never noticed the two blank lines between the scenes. I've been paranoid about it ever since then, and have always put something in there, between the scenes: an asterisk, several asterisks, a pound-sign (hash), whatever. AHMM, in its submission guidelines, specifically requests that writers insert a centered "#" between scenes, and my publisher requires three grouped asterisks (***). I prefer the #.

There are plenty of other manuscript formatting rules: use one-inch margins, use 12-point font, double-space, left-justify, and so on, and all of those appear to have remained in force to this day. There are also a lot of formatting rules for cover letters, envelopes, etc. I guess the main thing is, standardize as much as possible but try also to be aware of any changing of those standards. Getting published is an uphill battle anyway; you certainly want to appear knowledgable and not be annoying, at least not to an editor/agent/publisher. More and more of these "gatekeepers" seem to be young and female and far more receptive to change than the old male stereotypes who used to read our stories and make decisions about which ones to publish and which ones to reject. Don't get me wrong--that change is probably a good thing.

How about you? What writing rules do you follow, or voluntarily break, in the creation and submission of your fiction manuscripts? Do you still stand by the older rules, or have you evolved along with some of the requirements?

In closing, and on an entirely different subject, I'd like to again welcome Melodie Campbell to our group. I'm proud and honored to have her as my new Saturday blog-sister, and I look forward to her posts every other week. (I'm even hoping some of her fans might get their Saturdays mixed up and pop in to read my columns now and then as well.)

To today's readers, whether you're here on purpose or by accident, I hope to see you here again in two weeks.